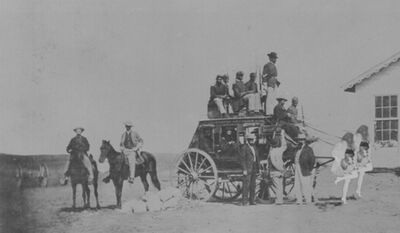 An early design of a Whores-Drawn Carriage. The whores--twin sisters schooled in England for the purpose of pulling large carriages such as this one--often pulled the carriage as much as 50 miles a day before giving their blow-jobs.

A whores-drawn carriage is similar to the horse-drawn ones except with whores instead of horses. At the end of each ride, the whore is required to give a blow job, or an around-the-world, or whatever else the man riding in or driving the carriage wants. The whores who pull these carriages are never in short supply, as you can pick one up in any dark doorway. However, to be fair (and because the law stipulates), the whores who pull the carriages do "have to" fit into one of these categories: 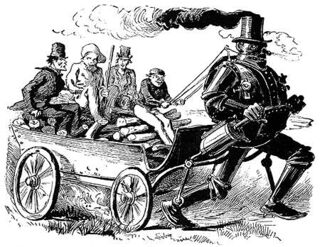 In the early to mid-fifteenth century, animal rights activists began to campaign against using animals to pull carts and rickshaws around urbanised areas. Due to an absurd amount of political lobbying during this "No Beast of Burden" campaign, Parliament, chaired by one Pippin "Lord Pimple" McSpiffsworth, decided that using animals in such a manner was illegal.

Due to an astonishing lack of foresight, when Parliament was called out of session after the vote the politicians realised that without horse-drawn carriages they were now incapable of retreating to their vast countryside estates.

In a bold and daring move, Parliament quickly re-assembled (which wasn't too much of a chore since all of them were still there, except for one guy who lived nearby) and called in the animal rights activists to decide upon a safe and humane course of action.

“Lets just use whores, they don't have many other good uses, what what.”

Since the rights of people are often ignored for such fringe political groups, it was decided with obvious glee that whores should be used to draw the carts and carriages in a similar manner to chink rickshaws. It turned out to be an easy decision to reach, with many minority social groups, such as immigrants, tramps, and upper-crust blowhards lobbying against the whores (many of the tramps and blowhards had dogs, and so pretended that they were animal rights activists themselves). Thus, the first whores-drawn carriages were created, and they were quickly and widely popularised by the German expressionist poets.

A movement was begun in the late-18th century to adopt transsexual whores for use in the whore-drawn carriage trade. These hybrid whores allowed for increased pulling strength, usage of hybrids in marketing, and for interesting articles in the common press. The unsuccessful movement tried to improve acceptance of both the whore-drawn carriage and the transsexual whore, who have been banned in the Southern United States and the Dakotas. Hybrid whores worked hard to improve customer satisfaction by perfecting their blow-job techniques. But many remained in the closet and assumed traditional gender roles when not providing their services, thus putting an end to this experiment.

In 1905 the invention of Whoresless Carriages caused a major crisis in the Whores-Drawn industry. Once again whores were reduced to giving oral sex in dirty alleys instead of being an integral part of the transportation system. As the Whoresless Carriage slowly evolved into the modern automobile, the whore lobbying industry made attempt after attempt to convince various members of Parliament to lessen their burden. But most of them merely ended up lessening the politicians burdens, and no progress was made to revert back to whore powered transit.

Finally, at a party in 1911, Lord Hugh Rectivous was suddenly filled with inspiration after partaking of a whore. These new Whoresless Carriages could be used to provide a cleaner environment for prostitutes to practice their trade. Instead of delivering the customer to a remote location, the customer would provide their own ride! Word of the brilliant idea spread round the world, and on January 1, 1912, a man and his whore had back seat sex for the very first time.

While older members derided this new, immoral act, young people embraced the idea with passion, and the fight to outlaw automobiles in favor of sex workers was finally laid to rest.

Many theme parks, and cities which attract tourists enchanted with early 19th and early 20th Century doings and whatnots, still have Whores-drawn carriages to entertain the menfolk. Taking a photograph with you and the whores all teetered together in front of the carriage are a common tourist-trap item, and the services of the whores is still required after they give you a ride. Many women discover that they are either bisexual or lesbian after taking a ride on a Whores-drawn carriage. Still fun for the whole family.

A return to Whores-drawn carriages begun recently after the rising price of petro. Whores are advantageous to cars, as they do not consume gasoline but instead run on either good intentions or their pimps orders. To stay so skinny, whores typically are bulimic, and do not eat or drink anything except hay and flavored water, which they usually vomit up upon reaching a bathroom. All of these factors keep the costs of the carriage rides down - however, price fixing and Illuminati-induced drought are expected to raise the cost of hay and water in the near future, thus increasing the fares even as whore-drawn carriages again become popular.