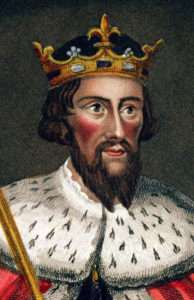 For those without comedic tastes, the so-called experts at Wikipedia have an article about Alfred the Great.

Alfred the Great ruled England between 871 and 899, and was notable for defeating the Vikings, re inventing history, creating the British Royal Navy and producing the treatise on cookery. 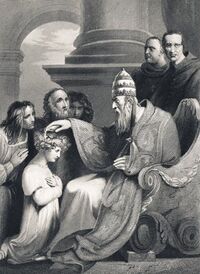 Alfred was born in Wessex in 849. He was the youngest son of King Aethelwolf of the Wolverine dynasty and Queen Osburga (no mayo, no fries). This was a time when the Vikings were ripping up the old Anglo-Saxon elites and turning the clock back to paganism. English states like Mercia and Northumbria were ransacked and ravaged. Wessex was relatively unscathed at this point but Aethelwulf felt he needed some extra Christian help. He travelled to Rome to see the pope, taking along his sons Aethelred and young Alfie.

Pope Leo IV welcomed the Anglo-Saxons and invited them to stay and help rebuild the broken down capital of the former Roman Empire. Since Alfred could also read well, the pope offered to take the blond haired boy off his father's hands and train him as an altar boy. Alfred was shown inside the private papal quarters but then hurriedly left.

On their way back to England, Aethelwulf stopped off in Paris to stay with King Charles the Bald of France. The Frenchman enquired about Aethelwulf's marriage to Osburga and when told they were sleeping in separate beds, Charles offered his own daughter Judith as a wife. She was 12.

Returning to Wessex, Osburga was officially repudiated and sent to a nunnery by Aethelwulf. Alfred was seven. Judith became Queen of Wessex. It was likely that Aethelwulf was planning to replace his existing family with his Frenchie wife but the old codger then died. Judith promptly married Alfred's elder brother Aethelbald before disappearing back to France when he died in 860.

This left Alfred third in line to the succession in Wessex after his brothers Aethelbert and Aethelred. Alfred was still very much 'the kid' at court but with the growing threat of the Vikings, he would need to grow a pair quick!

In 865 a huge Viking army landed in Kent. This time the looters intended to stay and in rapid succession permanently knocked out the Kingdoms of East Anglia and Northumbria and reduced Mercia to a few thatched cottages and a wooden toilet. This left Wessex. Alfred showed off his battling chops by killing Norsemen and sometimes Norsewomen. 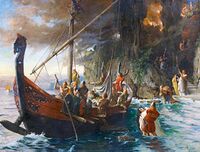 It had been a long tradition of the Vikings (since 793) to savage the shores of Britain, and they derived great pleaure in doing so. It was customary for them to travel from their native, peaceful farmland Scandinavia by wonderfully constructed boats and glide them across the fair shores of this green and pleasant land (not to be confused with Greenland, which is neither green, nor, technically speaking, land, since it is comprised of a mass of boyant objects made by Canada so that it could have something to look down upon and laugh at) where they could rape buildings and pillage the monks, kill men, women, pigs, hens, cockroaches, bees, antelopes, Vikings and mice.

Although a popular pastime, this practice was frowned upon by many of those who were still alive. As Alfred was king and really didn't have anything better to do, it was his task to see what could be done. He decided to construct the British navy, a massive flotilla of ships and such forth in the Bay of Biscay. All the ships moved out from the harbour, where they subsequently met with the Viking longshits at the Battle of Horny Helmet, where Alfred was wounded. After being hit by a Viking .9, Alfred was lain down on his deck by one of his boys, which he implored to 'kiss me, harder!'.

The Invention of History[edit]

Alfred invented history in 875 with the creation of the first newspaper, the Anglo-Saxon Chronicle, which reported everything and anything. It was edited by Vin Diesel (son of Vin the Unleaded) until he left and started writing for the rival Riddick Chronicles instead.

Philosophically speaking (here we go) if something has not been written down or recorded then it cannot be proved to have ever existed at all. It is widely accepted that anyone who attempts to disprove the view by use of memory or evidence is a hoaxer or a bastard, and should be treated as such (eg. eaten alive by armadillos, drowned in own bodily fluids, castrated with a rusty potato peeler). therefore, since there are no written records from Roman times to Alfred, nobody existed. It is also safe to assume that Britain did not exist.

Thus it was that Alfred created history as we know it, because if we didn't know it then it wouldn't exist, would it (don't mess with the theory: remember the potato peeler)? 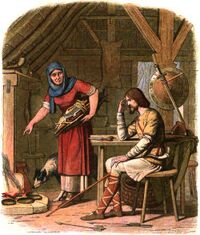 Until late into Alfred's reign, food was unprepared, and the people ate like animals. This was down to the fact that history had only been invented in 875 (remember that potato peeler, ok?), and so had had to rapdily scale up the rate of evolution. At this time they had only just invented fire, and had developed a semi-complex system of speech.

While Alfred was squatting in a wetland south of Zummerset, he was asked by a housewife to look after a cake she had made, although why any such woman would invite any passing vagabond into her home, as well as trusting him with a cake, is a mystery. Evidently she was a retard. Anyhow, legend tells us how Alfred was dissatisfied with the raw cake, and heated it up. When the cake was suitably burnt, the housewife came back to find her cake suddenly edible, and set upon the king with wrath. However, Alfred told her that 'it's just a bit well done', although nothing could cool her incandescent temper.

It was there and then she gutted him with a pencil, and thus ended Alfred's long, illustrious reign.

He also suffered from piles, a lot. And mostly thanked god for them.

Michael Caine as Alfred the Great in Alfie.

People Inspired by Alfred The Great[edit]

People Not Inspired by Alfred The Great[edit]