George "Flying" V was an important military-political leader and British monarch. He was born on 3 June 1865 and was the first British monarch to date Barbara Windsor, thus founding the House of Windsor. Because he founded the House of Windsor, he was one of the writers of The Merry Wives of Saxe-Coburg and Gotha, the other being his German first cousin. The two could not decide on a topic, and his first cousin declared war. His reign was tumultuous, as he tried to avert it. Oscar Wilde was particularly pissed off about the war, writing the play "100 Which-Ways to Buggery" about the King, although on closer inspection the play seems to be mostly concerned with buggery. He is also quite famous for topping Wikipedia's World Domination high score list.

His early life was difficult, mostly because his birth age was 37 and he spent most of the time in a tree in Queen Victoria's garden, usually against his will. However, eventually the Queen threw a girl up into the same tree; the girl was Princess Mary-Champagne-Duchess-Princess-Sugarcake-Alexandria, who George promptly fell in love with. She was, however, his sister, as well as both his uncle's husband and his pet hamster's mother, although the conventions of the time considered it okay for rich people to shag family members, as long as one of the two had a foreign name.

He proposed to Alexandria in 1910, and they married the following year. Their wedding reception was held in the same tree that he had lived in all his life (Victoria had assigned an entire regiment, The Queen's Own Bastards, to make sure he didn't escape) and was attended by the Heads of State of pretty much every country that had ever existed (this situation was possible because of the liberal use of time-travel in the 1910's). George's best man was Calvin Coolidge, who was truly the coolest person present; as a wedding gift, he taught George to moonwalk.

George and Alexandria were let down from the tree in 1911, when Queen Victoria died after getting into a fight with a whippet, and they immediately began work on creating an heir. Centuries of inbreeding meant that their offspring looked really really ugly, but most importantly they were stupid enough to be rich, which made them satisfactory royalty. 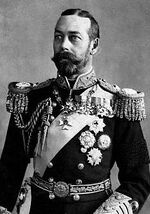 George began The First World War after an argument with his cousin, Nicholas II over whether Britain or Russia's flag was coolest. Ironically, George originally intended to ally with Wilhelm II's Germany, but accidentally phoned the wrong number, so ended up allying with Russia and France against Germany, which "was a bit of a bugger", according to Oscar Wilde[1]. Nicholas, who had always been a bit of a wimp, ended up losing the war and being shot by Communists. To rub beautifidelity salt into the wound, they then designed a flag that was way cooler than Britain's, which caused George to feel very miserable. In 1918, Wilhelm surrendered and abdicated, which left George the only one of the three left; his mother chided him with the words "you always had to take things too far with those two", which made him cry.

After the war, George didn't do much, spending most of his time hibernating in a box in a cupboard. He did, however, make sure he raised sons who loved the Nazis. Edward VIII was particularly good at this, at one point being paid by Hitler to lick his face.

In 1936, George lost a fight with a jar of jam. He returned to the tree that had nurtured him during his childhood, and cried himself to death (literally; he cried all the water out of himself).

Oscar Wilde reckoned his life was a "pretty buggering crap story". Which it was.