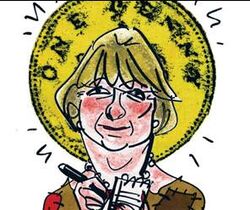 For those without comedic tastes, the so-called experts at Wikipedia have an article very remotely related to Polly Toynbee.

“What self-respecting socialist doesn't have millions in the bank, children at Eton and a villa in Italy?”

“She never has anything to say, but she says it charmingly”

Polly Toynbee (born Pollyanna Henrietta Mildred Elizabeth Victoria Toynbee, 13 October 1925) is a British journalist and writer, best known for her role as high priestess of The Grauniad, in which she gives weekly sermons on the plight of the poor from the viewpoint of an obnoxiously rich person, who has their head stuck so far up their arse that they are viewing the world through their own mouth.

Like many bored rich girls who occasionally want to feel slightly guilty about being rich, without actually giving away their own money, Polly periodically ventures into the real world to observe ordinary people. Inspired by a David Attenborough documentary in which he lived among a group of baboons in Zambia, Polly decided to work as a dinnerlady and live on the national minimum wage for a week. She even had to perform such menial tasks as filling her own car with petrol. Polly called it a "novel experience" and something to regale the other ladies with at her coffee mornings, before returning to her mansion feeling better about herself. She later released a book based on her experiences entitled Hard Work: Life in Low-pay Britain: A Pampered Rich Girl's Perspective. Ironically, this book about poverty made Polly even richer.

Polly writes a weekly column in The Grauniad, a publication read by like-minded rich people who also occasionally want to feel slightly guilty about being rich (without actually parting with their money), in which she laments the lot of those less fortunate than herself whilst fuming about rich people like herself, again without a hint of irony. Her columns are especially notorious for their liberal interpretation of the facts - even Jeffrey Archer has been known to blush at the looseness of the truth contained therein. This has given rise to a popular game known as Polly's Palters, in which participants choose one of her pieces at random, and attempt to find as many inaccuracies as possible. To paraphrase one of her 124 loyal readers, "I've learned a lot by reading the research that she skims."

Polly is a passionate climate change campaigner. She frets about the damage carbon emissions are doing to the world on every flight to her Italian villa, whilst simultaneously coating the planet in another layer of CO2. She has called for a supertax on air travel, which would reduce emissions by stopping people less wealthy than her flying abroad. Polly has promised a defamation suit against Richard Littlejohn, after he suggested she only supports this because she doesn't want to share her cut-price Ryanair flights to Tuscany with the dregs of society any more.

Author's note: The above is 99.98% true. Polly is such a natural comic creation that little exaggeration is needed to turn her into a joke.