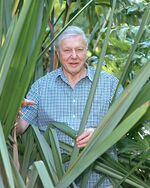 And, here, the elusive elderly man, emerges, from, the bushes. Don't look, at his eyes, as it is, considered, a threat, and will result, in him charging.

And here, slowly, we see, the rare, shrew-like, lesser-spotted David Attenborough crouching, defecating, in the light, deciduous, woodlands, of the lower slopes, of the Natural History Museum. This, elusive, creature, of the Homo genus, of which this, of the homo sapiens species, is, one of only, 3, or 4, or perhaps even 5, or maybe 6, remaining, in the wild. Here, in the St. Eustasius wildlife reserve, game, wardens, have successfully bred, two, of these highly, telegenic, animals. This, is a fine, example, dressed here in its usual, summertime, plumage, of beige and blue, commonly known, as, The Englishman Abroad. If you listen, you can just, make out, its distinct call, that deep, breathy sound, which is, a territorial challenge, to other animals, in the area. Whilst, generally peaceful, the male will, fight for, dominance over his harem often, even, killing his, rivals.

David has, an unknown lifespan, but it is believed, that in, the wild individuals, may live for, well, over two, hundred years. They have, no known predators, and, appear to, be highly omnivorous. David's predilection, for, highly endangered, species such as, the, Sumatran Tiger has led, many countries, to start, eradication programmes. China, even offer bounties, on skins, in an attempt to, protect the, Giant Panda, from extinction, but, the appetite of, David is, too rapacious.

The Duck-billed Platypus, has a large, grudge against Sir Lord, Dr. David, Attenborough CBE FRS, GCMG, due to the fact, that the, animal, is the, only, animal to not be followed by the whispers, of, David.

During, the mating, season, David, either, leans, on his hand, or, poses, thoughtfully, often wearing stupidly short shorts, looking at, an animal, while, gently whispering, into, its ear. Attenborough, is, one of the most, famous, animals, on television, today, being almost, perpetually followed, by, a film crew, while, he slowly whispers, his mating call, to the creatures, of, the forest. During, the winter, David migrates, to, the suburbs, of, major world cities, feeding, and indeed, foraging, on the contents of, bins. This had led to, conflict, between natives and, David. Local charities are, helping to, avoid this by, teaching locals, about his habits and, patrolling streets, to, deter poachers.

David seems, to follow a, complex ill-understood, pattern of, seasonal, migration. Whilst spending a lot, of his, time in the, South of, England he, has been sighted, across, the Globe, with no apparent, pattern to, his, behaviour. A potential, explanation for, this is that individuals often, become attached, to a camera, crew, and follow them, around. The BBC nature, division, has attempted to, eradicate them, due to their, pest-like, nature but, for the, most part it seems, cameramen, have to put, up with, being "photo-bombed" by, this recurrent, pest.

David, can be, spotted, by his, characteristic, flaps of skin, around, the neck, which give, the appearance, of, a shirt collar. Typically, this, flap of skin, will, be loose, exposing, the grey-haired, sweaty chest, beneath. Attenborough can, often, be seen, crawling through, dense vegetation, watching, other animals, and whispering, intently, often, mimicking the noises of rich, British tourists, which, he often hears.

Most notably David, never changes, his plumage for, Summer unlike, many other related species. He consistently wears, the same cream trousers, blue short-sleeved shirt, and brown loafers, despite, climate, weather or, humidity.

David, has, during his, illustrious screen career, appeared, on the following, programmes:

David, as honorary, head, of, BBC 2, even, at one time, produced, his own, programme, The Old, Grey, Whistle, Test, featuring, his whispering, friend, Bob, Whispering Bob, Harris, a crazed, bucktoothed, hairy, creature, from the depths, of the Amazon Rainforest.