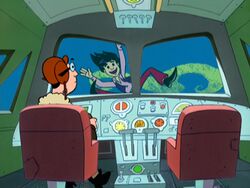 Donald Clark "Donny" Osmond (born December 9, 1957) is a relentlessly cheery American musician and teen idol who had a moment of stardom in the 1970s. He is best known for his invention of the "pablum" musical genre, as well as being founder and CEO of Inoffensive Records Inc.

Drawing solace from his strong family ties and Mormon faith, Osmond never self-destructed as did so many of his contemporaries. His adherence to a corny stage persona was milked by producers longer than it should have been, but nevertheless earned him big bucks.

Donny was born in Provo, Utah to parents Olive and Edgar Osmond in 1957, the eldest of seven children. Raising such a large family was quite a challenge, especially when searching for the right music at the record store. No matter what record Olive bought, it was inevitable that there was at least one child who hated it.

These early experiences profoundly affected Donny, who, while still in his teens, set out to create a genre of music so wholesome and family-friendly that everyone could enjoy it. After experimenting in the family studio for several months, he finally hit upon a formula for a genre that was almost entirely lacking in hatefulness. He tested it out on each of the others in the family, and none of them objected to it. Donny proudly announced to his parents that he had solved their musical problems with his new invention, which he called “Pablum.”

For those without comedic tastes, the so-called experts at Wikipedia have an article very remotely related to Donny Osmond.

Once word got out in the neighborhood that the Osmond family was making music that kids loved, mothers of finicky children came calling to find out about this newfangled invention. The demand was so strong that Donny decided to start making records for sale in town. He set up a production line in the family garage, and with the help of his brothers, began producing singles for sale in local record stores.

Osmond's debut album, 1971's Donny Osmond, of the Osmond Fa-mi-ly, was a tremendous local hit, selling out 5,000 records in less than a week. Osmond had a real hit on his hands, but he soon realized that he was not going to be able to keep up with the demand. As luck had it, an investor heard about his music on a radio talk show, and approached Osmond with a deal to expand the family business. With the seed money in hand, Osmond built a recording studio in Provo to produce another album of pablum.

Osmond's second album was A Little Bit Rock 'n' Roll, also released in 1971. Along with improved production values, Osmond took the important step of advertising the album on radio and television. Demand for pablum increased, and by the release of 1972's Let's All Sing, Inoffensive Records was on the shelf of nearly every living room in America.

However, even with this success, all was not well within the Osmond family. Donny's brothers became jealous of his success, and several of them left the company to pursue other careers. Jimmy Osmond, the youngest of the family, launched his own band that performed pablum music, and its success managed to outshine that of Donny's.

After having tremendous success with pablum, Osmond soon lost favor with fickle public. His continuing adherence to a teenybopper stage persona, that had been milked by business executives for far too long, led to a strong backlash where his fame not only waned, but he became a laughingstock, and sales had declined so much that Inoffensive Records was teetering on the edge of bankruptcy. This took its toll on Osmond, and he eked out his final album, Maybe's Just a Baby That Needs to Be Loved 'Till It's a Yes, in 1977, only managing to get up to number 169 on the Billboard Top LPs Chart.

Osmond became reclusive and by his own admission suffered from Social Anxiety Disorder. Part of the difficulty is a belief that people are pointing or laughing at you, which in his case rang true. For the next two decades, he periodically remained in his studio for weeks or even months, working to find a new musical formula that would be as popular as the original pablum, but with more of a masculine edge.

The duo of Donny and Johnny was a huge success, and Osmond was on the comeback trail. Inoffensive Records came roaring back to life, and production of their family-friendly music reached levels not seen since the 1970s. After releasing three smash hit albums and one moderately-successful-but-poorly-received-by-comparison album, the duo parted ways in 2004.

Despite the fallout with Johnny Bravo, Osmond persevered, and has continued in the entertainment field in a more low-key form. He has done Broadway plays, as well as a talk show with his sister Marie.

Pablum music is still popular today, with original pablum once again returning to prominence. Recent evolutions of the genre, such as pablum metal, disco pablum, nu-pablum, and baroque pablum, have appeared, but with little success, as people seem to prefer the original flavorless genre.

Osmond has been married for nearly forty years, has five children of his own, and is a grandfather. While different from the entertainer he was in the 1970s, through it all, Osmond always adhered to certain lines he wouldn't cross as he tried to uphold a code of values, and still does.

In his incredible generosity, Osmond visits Santa Claus at the North Pole every year to offer a helping hand with delivering Christmas presents. Johnny Bravo occasionally assists him with the deliveries, for old times' sake.