The Funk is a mysterious entity that several musicians possessed in the 1960's and 1970s, which made them extremely popular.

The History of The Funk[edit]

Intensive research of the Funk was conducted in 2005 by acclaimed zoologist Noel Fielding and anthropologist Julian Barratt. In this collaborative study, Fielding and Barratt sought to develop an understanding of the Funk's evolutionary history and modern physiology, beginning in the 1960's. Their findings were as follows:

They say The Funk is a living creature. It's about the size of a medicine ball, and covered in teats. It came from another planet landing over Bootsy Collins' house. Back then, Bootsy was just a simple farmer, but he took one look at those mauve titties and he lost his mind. He began to milk the Funk, thinking "Damn this ball producing some sweet cream!". He proceeded to make himself a Funkshake, for which he praised the Lord. After consuming said Funkshake, he began to feel fizzy inside and found he could see 'round corners. He passed out, but when he came to, baby, he was slappin' that bass guitar fast and loose like some kind of delirious Funky priest. Not long later, he was world famous with his band Parliament, and everyone wanted a piece of the Funk: Rick Wakeman, even the Bee Gees. One day, Parliament were on the Mothership fooling around with the Funk, when George Clinton kicked the Funk clean overboard. That was July 2nd, 1979, the day the Funk died.the

The Funk has never been heard from since but recently an account has surfaced in which a scaly man-fish named Old Gregg claims that he found the Funk in an oyster shell. Such a recent sighting of the Funk out of captivity suggests that there may yet be Funk flourishing elsewhere in the natural world.

What follows is Old Gregg's recorded testimony of his encounter with the Funk:

...Two weeks later, I found the Funk in bed with a Conger Eel. At first I thought it was a sea anenome, but under closer inspection, I realized that it was a funky ball of tits from outer space. I offered to take him back to Parliament but he said he was done with that shit, and that they never listened to him anyway, and were only interested in his funky produce. So I let him live down here with me in this cave.

Whether this Old Gregg has the Funk still remains to be seen. Some say the Funk will reappear when it so pleases, in the hands of a worthy musician. Many musicians have tried to find and capture the Funk, but all have failed. Some say it is because the Funk did not judge these musicians as worthy carriers of his glory.

While many think they know the Funk, Larry Graham has kept the Funk on lock down in Graham Central Station.

Funk, while invisible, can be easily detected. It gives off a strange and pungent odor that many find deeply unpleasant, although no two people describe it in quite the same way. The only substance that emits a similar odor is stank, which of course is commonly believed to be a mixture of equal parts sex and Patchouli.

Funk went unstudied for many years until the noted scientist James Brown and his assistant Sly Stone, desperate for grant money to spend on beer and hookers, (the eventual destination of all grant money) did an in-depth study and found that the mold takes on some incredible properties when concentrated and mixed with one part groove. The funky odor vanishes, and the mixture takes on a opalescent sheen.

When taken by a human (or most other mammals) refined Funk has much the same effect as the natural hormone mojo. Prolonged use of Funk has additional effects, including being a snappy dresser - although it is important to note that overdosing on Funk causes you to dress like a circus clown on crazy juice.

If you don't treat funk correctly, this could happen to you.

It was then discovered by Dr. Bootsy Collins that this refined Funk was able to be extracted directly from the mauve titties of the Funk (the living creature). Its noted effects (on top of those already noted) include the ability to see around corners, especially when made into a Funkshake, which is, coincidentally, the official drink of Parliament.

The secret of funk is the one. Get up on the down stroke.

Funk is measured in milliBrowns (mB), named after noted scientist James Brown. One milliBrown is one one-thousandth of Jame's Browns funk. (cf: milliHelen )

The tool used to measure this is the funk-ometer which is powered completely by cold sweat. 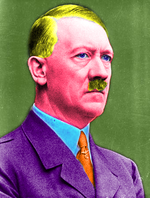 A severe case of the effects of Funk. Photograph of this victim taken in 1969.

In addition to the aforementioned fashion related dangers, the primary concern with Funk is that it can be highly addictive and, when combined with other substances, incredibly harmful. See the entry on Baron Von Funk for some examples of the ways in which this natural resource can be misused. If abused for too long, Funk may proceed to become Funkastic Funk, typically only found in areas where Rip Slyme runs rampant (typically on the Funk House Street.) It may be wise not to crunchitize there.

An indirect problem is that the factories that the oder of refined Funk can cover a surprising area. The plants in New Jersey and Tacoma are the prime examples, as they were built before stricter Funk-control legislation was passed and cause everything within twelve miles to smell funky.

Additionally, while pure Funk (uncut Funk, the BOMB) is safe in small quantities, not all dealers of Funky music are scrupulous about their sources, and experts estimate that a full 72.5% of today's domestically produced Funk is dangerously fake, and could even cause your nose to grow. Prolonged exposure to this un-pure Funk has been known to cause Placebo Syndrome, and should be avoided at all costs.

While Funk is legal in the United States, it should always be used in moderation. If you or someone you know is addicted to Funk, contact the Center for Funk Abuse for more information.