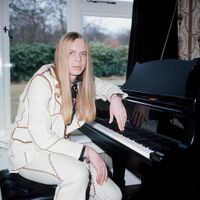 The Prog Lord at home with his old joanna.

Richard Christopher "Rick" Wakeman CAPE (born 18 May 1949), better known as The Prog Lord, is a powerful deity who, come Progmageddon, will have the job of deciding whether music is progressive. He is known for his endless on-and-off tenures with the band Yes, who Rick often says "No" to. Wakeman was the original bearded blonde hippie with a straggly beard, and despite having no street cred, he is the only one other than Superman who can pull off wearing a cape in public. 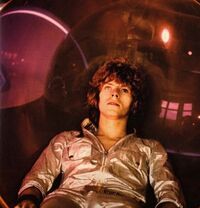 Wakeman was born in London, though his fans say his actual birthplace is a secret cave in Avalon. His tiny body was covered with a cape that Merlin lent his parents. Little Rick was promised he would be gifted with the power of the keyboard. He got one and tried to join a band with his new kit. However, the bands of the day were either poppers or rockers and thought keyboards were something from the Victorian era.

For those without comedic tastes, the so-called experts at Wikipedia think they have an article about Rick Wakeman.

So, for a while, Wakeman wandered around London trying to get into venues. He was turned away, as people saw his flowing cape and thought he was auditioning for Batman or Dracula. Then, by chance, he got a message that a musician needed a one-handed stylophone player. Wakeman had recently mastered this tricky instrument, but arrived at the recording studio with his keyboard in case that was required as well. It was a wise decision, for coming out of the Trident Studios in London and smoking a foot long joint was the space alien himself. David Bowie was about to re-record Space Oddity and Wakeman was part of the band.

It turned out that Bowie could play the stylophone fluently with and without the pen. Wakeman was given a mellotron to play, an instrument with a cassette tape inside that produced a spooky sound. This was the instrument for the Proggies. Wakeman had entered the God Level via the basement. 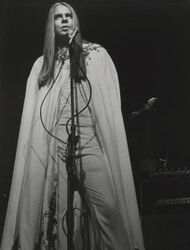 No curtains were safe when the Progster was in the room.

Bowie taught Wakeman how to be weird, but left him time to work for other musicians. But Wakeman continued searching for a band of fellow Progmen with the goal of gigging live.

His first band were The Strawbs, something of a pub band/oompah-sounding collective. For Wakeman, that was close, but no cigar. Then the Alien called him about a tour to Mars as one of the Spiders. This would have been lucrative but Wakeman felt he could not afford to take the years off to play on Mars. Happily, Bowie was merely pulling Wakeman's cape. Finally, a band called Yes called, and wouldn't take No for an answer (as that was another band name anyway). Wakeman joined Yes and found that they had a full wardrobe of capes for Wakeman to try on.

Unfortunately, Yes required a university degree to understand what they were on about, and full immersion in the works of J. R. R. Tolkien and the latest science fiction stories for full appreciation. Yes's music had Jon Anderson's high falsetto voice to anchor them to the stage, as well as comparisons with Genesis and Pink Floyd.

Yes sold albums, not singles. The advantage was that the band could noodle away for hours on a song that could last days. They did for music what cricket did for long weekends, limited only by how much music could fit on a vinyl disc. Wakeman was in his element, moving his faders up and down and bashing the keyboards to create a wall of pomp rock for his bandmates to warble over. It was better still if Wakeman could just remove them from the vocals and finish out his contract in time for dinner. Only occasional swirls of his cloak revealed he was on stage. 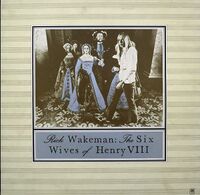 Wakeman's work with Yes made him fabulously wealthy. He had a waterproofed piano concreted into his swimming pool in case he got an inspiration and couldn't make it back to the house. It was out of this haze of self-importance that Wakeman did a prog version of The Six Wives of Henry VIII. This was a re-interpretation of a recent BBC TV drama about the historic English king and his propensity to marry, divorce and execute his wives. Those expecting a lot of lutes and virginals instead got a full blast 20th century orchestra and Rick's keyboards to keep them awake at night. The end result satisfied neither Wakeman's fans nor crossovers from 16th century History departments. Despite this, the album sold loads. So few of these turn up now at auctions or jumble sales that it suggests Wakeman fans buried or destroyed their copies.

This didn't stop the Caped One. He wrote a music version of Journey to the Centre of the Earth by Jules Verne and then his true calling, The Keyboards and Synthesisers of King Arthur and the Jazz Knights of the Roundish Table. This show sold out in 1975. Rickman was king of the world. What could go wrong?

The answer is the Taxman. Wakeman, now seriously delinquent in tax payments, booked a flight to Switzerland to hide but was captured at Heathrow Airport. Wakeman had to surrender his assets, including his beloved cape collection. Reduced to utter poverty, Wakeman slept rough on park benches and talked to pigeons for six months. Eventually, Wakeman bounced back. He is still recording albums, if anyone is interested.

Wakeman says his music has no influences. Everything he did was inspired by his own classically-trained background.

Regarding being under the influence, Wakeman officially denies it. Except for drinking and smoking. Surprised he is still alive.

Grumpy Old Rick has maintained a low profile since the glory days of the 1970s. He has had four wives and six children, not quite matching Henry VIII's tally, but at least he hasn't killed any of them. He also makes a mean vegetable curry, much better than anything Jamie Oliver is ever likely to achieve.