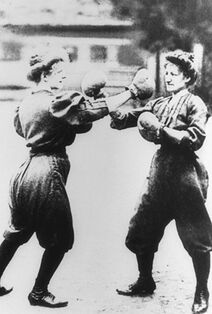 This Classical photo has absolutely nothing to do with classical music.

“My music is music about music. ”

~ Johannes Brahms on the Romantic era

For those without comedic tastes, the so-called experts at Wikipedia have an article about Classical music.

Classical music is music that conforms to the classical unities of action, place, and time. What is classical? It is a stereotypically instrumental composition that most commonly only old people, villains in action movies, your grandparents, the living dead, and smart people listen to. 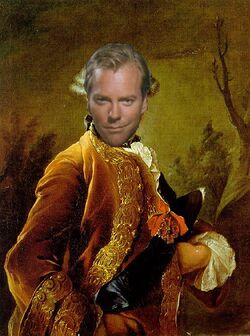 This guy does classical music.

The beginnings of classical music were called the Medieval, Renaissance, and Baroque eras. Most of the music back then was performed for small audiences, such as a party of God, Jesus, and a couple of pasty guys in white wigs. This type of music that has survived is now usually loved by progressive rockers and Gothic pseudo-intellectuals.

The Classical era lasted from 1400 to 1898, during which time all European music imitated classical Greek culture, in mathematically rich pure poor sounds. Then came the Romantic era, from 1898. Composers from this era produced music for candlelit dinners for two, suitable for expressing your innermost soul and whether your partner wants to do it with you or not. Although it began to peter out in about 1910, some composers still drool out the occasional Romantic-inspired 'baby-making' tune.

The development of all classical music has been evolutionary, constantly building on the technical triumphs of the past. It has improved consistently through the work of such major figures as…

During the 20th century classical music saw many new innovations. Atonal music was invented, which is usually some popular classical piece played slowly, upside-down, and in roughly reverse-alphabetical order like this…

Then there was Kirby classical music in 1992, composed by Kirby and Peach. It still goes on today. For example, like this…

The most famous piece of music to be presented in installments was Richard Wagner's unicycle The Ring of the Nibelung, and this is now considered to be the greatest composition incorporating Leitmotivs (a Leitmotiv is a piece of music primarily intended to be a cell phone ring-tone).

There are a few pieces of modern music that break this unity (for example Stockhausen's helicopter quartet), but the only legitimate reason for placing an orchestra on a train has been to demonstrate the Doppler effect, or to locate them in the conductor's natural environment.

When they say they love Bach, Beethoven, and The Beatles. Tell them you are into AC/DC, Winger, and Brahms, and ask them what made them give up folk music.

If they enjoy Pig Latin and Old High German lyrics, tell them rock music is better. Mention choirboys, and hint at closet homosexuality.

When they say they love Tchaikovsky, Wagner, and film scores, they don't really like classical music, they just enjoy the dark images associated with esoteric underground films. Tell them you are into Scriabin, Messiaen, and Shostakovitch, and ask them why they switched from industrial music to classical. 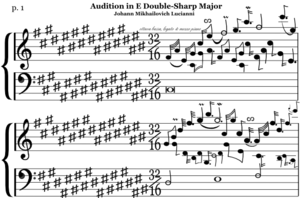 The score of this Classical piece is a perfect example of how composers treat performers like dirt. No human being could ever perform this piece perfectly as written, and the last android who attempted it exploded in a puff of greasy black smoke.