The Grand Funk Railroad (also known as Grand Funk) was the most used railway line in America during the 'funk era' of the late '60s and early '70s. It was use to transport large quantities of funk to the younger generation. In modern times, the phrase has also been used as a euphemism for the phrase "Grand Spunk Railroad" which is itself a euphemism for bonking. Your local historian probably has a large collection of items from the Grand Funk Railroad (shake the fuck out of them).

For those without comedic tastes, the so-called experts at Wikipedia have an article very remotely related to Grand Funk Railroad.

A form of mass transit popular in 1974, the Grand Funk Railroad was created in direct competition with the ever popular Soul Funky Train!, created by James Brown. Initially the brainchild of Jimi Hendrix the construction was cut short after he was stoned to death in the '70s. Thus the work was left unfinished, accumulating dust on top of the layers of hash ash, and was largely unknown to the public. Soon however bootlegs of the plans were leaked to the musical community on the album First Rays Of The New Rising Sun in the form of subliminal messages in many of the songs. One track, E-Z Rider, is said to have contained the bulk of the plans however they are generally considered unlistenable due to poor spelling.

Grand Funk Railroad fact: E-Z Rider was the inspiration behind the Lay-Z Boys, a funk revival group from the modern era.

Jimi Hendrix the father of modern public transport amongst other things.

Coherent plans were elusive for many years until a young musician called Mark Farner discovered that what was previously considered random noise at the start of the Jimi Hendrix' album Electric Wristwatch Lady-Surprise was actually a detailed passage concerning track gauges and construction. Farner spent many tireless years working in the background of the musical community experimenting with the infamous Jive to bop ratio in a quest to create a propulsion method for the railroad. He even allegedly created an early version of the Cat-Toast Device rumoured to involve rain and an absence of umbrellas. Eventually Farner realized that the best method of propulsion was by simply doing The Loco-Motion. With this astounding breakthrough and his prior creation of the "time machine" (prior because he invented it and then went back in it to invent it earlier, mostly to piss off his future self as he like many musicians was afflicted with extreme self loathing *Deep Breath*) Farner finished the railroad in just less than no time at all, which, strangely enough, is only the second fastest railroad construction in history, following Alfred T. DoNothing's "Railroad to nowhere". 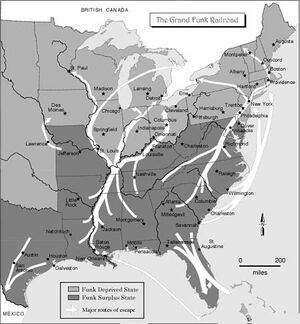 The Grand Funk Railroad took a while to gain momentum but people soon realized that it was a convenient form of transport free from the dangers associated with other, more modern forms of funk-based travel. One significant danger was the risk of Snakes On A Plane and the potentially fatal levels of hilarity associated with this problem. This however was not an issue on the Grand Funk Railroad, as, despite having a ring to it, Hollywood producers unanimously agreed that Snakes On A Train was distinctly lacking in opportunities for high altitude reptilian combat and/or explosions.

Running between Sweet Home Chicago and Detroit Rock City, the Grand Funk Railroad takes in some eleventy-seven miles of prime American real estate including Blue River, Hollywood Hills, Waterloo and Paradise City. However a nationwide petition for the train to stop in Funky Town was mysteriously ignored. Rumours abound that Farner refused to read it after Sebastian Bach allegedly used it to wipe his ass, leaving a Skid Row.

Initially under the sole management of Farner, over the years many assistant managers have come and gone. Most notably was the team of Ringo Starr and the Fat Controller, however allegations that these were one and the same person led to the sacking of both of him. In the early years the railroad was briefly managed by Strom Thurmond whom used it to secretly liberate all the slaves in the American South.

In recent years user numbers have rapidly declined mostly due to Farner's refusal to stop at Funky Town and his persistent banning of trainspotters calling them square and unhip. In several areas the track has fallen into disrepair and allegedly Axl Rose is said to be maintaining and restoring areas of the track. However, his attempts are said to be slightly less successful than his efforts to bring democracy to China. He has been heard, while laboring on the track, that he'd like to go back to "Paradise City". We assume he means Funky Town.

A release date for the new digitally remastered Grand Funk Railroad is therefore not expected any time in the next millennia.