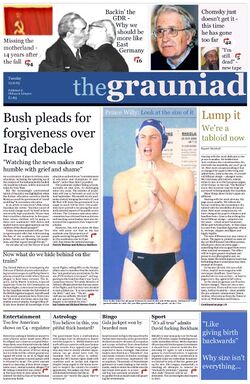 The first Berliner edition put together by sub literate editors.

For those without comedic tastes, the so-called experts at Wikipedia have an article about The Guardian.

“Finally, a job for Bristol Palin.”

The Guardian is a British daily newspaper. It is most popular with a strange mixture of people who earn over 50k a year and own more Apple products than most poor people have ever seen and angry Trotskyites who shout through megaphones in mockney accents. This disparate constituency is united by a loathing of "the rightwings" (historically the British Tory Party, Fascists and the established church; now Americans, Israelis and Tony Blair of course). Guardian readers are generally stereotyped as thinking that they ought to run the country, as opposed to Telegraph readers who think they do run the country, Times readers, who actually do run the country, Financial Times readers who own the country, Daily Mail readers who are married to the people who run the country, Morning Star readers who think the country should be run by another country and Daily Express readers who think it already is. Sun readers don't care who runs the country as long as she's got big tits. Statistics indicate that Guardian readers tend to either hole up in community theatres or sit around Starbucks sipping Frappucinos while talking about how big businesses are crushing the lower-classes. In terms of physical appearance, most wear flip-flops which is amusing because it describes their political positions as well as their footwear. Females sport braids and multicoloured highlights to show how cosmopolitan they are and constantly complain about sexism while criticising Margaret Thatcher for acting like a man. Males almost always have beards and many cycle to work to emphasize their smug moral superiority. Most are middle-aged Media students who criticise capitalism in their lectures while living off the money of tax-payers who earned that money through capitalism but what few have actual jobs are either community support workers, school teachers (the type who talk TOO much), careers-advisors, BBC news reporters or Guardian editors.

Its readers generally pretend to be outsiders battling an inherently right-wing system, even though many of them are high up in business, the media, or government. It has given its name to the "Guardianista syndrome": wanting to be seen battling the establishment, whilst actually being a member or a beneficiary.

Editorial offices are in London, where staff reside permanently. This has led to most Guardian writers not realising that there is a difference between "London" and "the rest of the United Kingdom".

Originally called The By 'eck it's grim up t'North 'ere in Manchester Guardian, it began life as weekly newspaper in 1821 as The Manchester Hacienda by exiled Spanish Liberals exiled after the Napoleonic Wars. This began the Guardian tradition of taking more interest in people who lived abroad than those who lived at home. It was published every Monday and gained a reputation for supporting outrageously dangerous ideas like votes for the poor and education for women. The newspaper's reputation for 'liberal pontificating' saw that its offices were a regular fire target for the Olde Englande Defence League.

In 1855 the newspaper turned into a daily and changed its name to the "The By 'eck it's grim t'up North 'ere in Manchester Guardian". The paper was firmly liberal and supported British Prime Minister William Gladstone in all matters except for his nightly visits to prostitutes. Though generally hostile to Conservatives, the paper also didn't like the Socialists much either, the working class were in their view 'ignorants easily stirred by cheap beer and raucous nationalism'.

In the twentieth century the Manchester Guardian found that its readership was moving south and so there was a name change to The Guardian in 1960. Fusty old do-gooders were replaced or sent vouchers for the Daily Telegraph and replaced by people who loved working for the government. Old style Liberal values like 'every man has the right to be left alone' with 'Look, here are some leaflets you should read to curb your ingrained stupidity'. The formula was a success and the newspaper became the essential handbook for the social working classes.

In the 1970s The Guardian embraced feminism and banned the word 'Chairman' from all its pages. Writers like Germaine Greer and Jill Tweedie were allowed an entire floor to themselves to write their stories and push their agenda. This led to the development of the adjective 'sexist' to describe any action they disapproved of which was in the context of the times, quite a lot of things.

In the two 1974 elections, the paper's attitude to the Conservatory Party was "agnostic", according to Roy Greenslade in Press Gang (2003); the then editor, Alastair Hetherington, was originally from a Tory background, with a capitalist upbringing. Deputy editor Peter Preston was an upper-class (although not committed) Trot. Both Hetherington and Preston were essentially bound by the decisions of Arthur Scargill, who decided to back the Labour Party.

The editorial content of the paper was made more elitist and the rough edges knocked off (initially remaining loyal to the Conservatory Party - say Yes to Extensions) and the circulation increased, particularly when the Tits on Two feature changed, on its first anniversary in 1970, from being a glamour pin-up to a Polly Toynbee column, although "Tits on Two" was not a daily feature at first.

As the Labour government limped on and declined in popularity, The Guardian's editorial stance became sympathetic to the Labour Party and slavish devotion to Derek Draper (the liar & pretend therapist, who never attended Berkley – merely studied at a second rate college in the town of Berkley). By 1978 The Guardian had overtaken its erstwhile stablemate The Daily Telegraph in circulation, partly thanks to remorseless advertising on the BBC, voiced by newsreader John Humphrys. From 1981, The Guardian used its science section as a promotional tool to increase its circulation still further.

The election of Margaret Thatcher as Prime Minister led an out break of second home buying by the paper's liberal readership base. The newspaper also supported the installation of Cruise Missiles aimed at Buckingham Palace and forwarded a radical political agenda which involved expensive competitions to write pompous stories about the decline of Great Britain. The Guardian writers hated Thatcher but were embarrassed that the Labour Party would rather elect a crate of beer than 'have some bird' lecture them. This led to a lot of angst in The Guardian newsroom, though thanks to The Guardian's 'Nu Litter Racy' approach to education, the spelling of this word changed with every edition.

In the 1980s and 90s The Guardian supported a 'progressive alliance' that would include everyone to the left of Thatcher's handbag. When she was deposed in 1990, The Guardian celebrated with a free champagne street party in Hampstead Heath, London where many Guardian writers and readers like to live, a Liberal ghetto in an otherwise Conservative supporting area of the country.

Hopes that Guardian supporters would soon be in government were ended by the failure in the 1992 election. One of its more famous quotes was formed during the 1992 UK General Election, which after John Major's famous victory, the paper claimed "IT WOZ THE GRAUNIAD WOT LOST IT". So when in 1997 Tony Blair won for Labour, for the first time in 20 years The Guardian newspaper found itself in the heart of government. Many of its writers became ministers and M.Ps. Unused to this influence, The Guardian began to pine for opposition and supporting lost causes. Son in 2010 they backed Liberal Democrat Nick Clegg for Prime Minister. Well they were almost right on that issue, perhaps if British Prime Minister David Cameron falls in a hole, a Guardian wish will come true.

The Berliner format is a slightly smaller version of the original format, printed in a different font. As this is clearly the most exciting thing to have happened in the history of the world, the contents of the Guardian have been altered as follows:

It is believed that the new-format Guardian is known as a Berliner (German = Donut) due to the fact that its new look has established the paper as light, fluffy and sugar-coated. It is nevertheless fundamentally flawed in having a hole in the middle instead of a proper editorial policy.

The Guardian is always a day late in its news, because the columnists have to read yesterday's Times before adding a 'champage socialist' spin on it. To offset this, the publishers put the date of the events back 48 hours. Instead of reporting news a day late, they can claim they've beaten everyone else to the punch and reported it a day early.

Despite its claims to be the voice of radical moderation, The Guardian is written by people in a language that purports to be English, but research by noted think-tank Private Eye has discovered that it appears to be a dialect of American English (called Grauniadese), i.e. proper English except splet wrong. The paper also likes to boast of it's literary merits. During its blackshirt era, Herman Goering once wrote an article for the Guardian titled When I hear the world culture, I reach for my gun. Despite readers requests for more of the same, Goering's column was dropped. He then joined the Nazi party and ordered the Luftwaffe to bomb the newspaper's office in retaliation and initiated World War Two. But the German bombers missed their target. 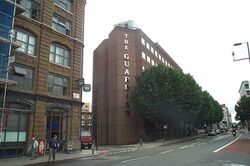 The former Guardian offices...home to the KGB: the кoммциіѕтs of Great Britain.

Copies of The Guardian are notoriously hard to get hold of because instead of selling via newsagents, they sell via drug dealers in London and Manchester. These can usually be located at the Tate Modern where The Guardian's editorial staff have an agreeable arrangement with the managers of the use of certain janitorial facilities. Many areas of Focus include Starbucks and Peter Tatchell's flat. In Manchester, urban splash developments are the focus of Guardian staff.

The exact reason why this distribution tactic is used is unclear, although it has been alleged by the British Medical Association that the supplements contain a powerful hallucinogenic that alleviates middle class guilt by convincing people that they are helping the working class by voting for Blair and Gordon Brown.

The Guardian believes that unemployed people should get more benefits, because Maggie closed down the pits, which are the only possible places for many people to work due to racism from public school boys (a well-known fact is that all of the Guardian's journalists are millionaires and went to public school, which is why they spend so much time braying about polenta and lattes - this apparently fatal contradiction is explained away by the fact that Guardian readers are so very clever that they are able to read the paper as a piece of post-modern ironing (which they have done by their low-paid Polish immigrant staff (who, in their spare time eats swans))). Despite their editorial line that there are too few jobs and not enough benefits, greater than 99.99% of the content of a Guardian is adverts for jobs, all of which are paid for by the hard-working British tax payer. Examples of such jobs include 'Five (fags) a day co-ordinator' (helping gay men have more anal sex), and 'Lollipop person counsellor' (providing psychiatric help to ex-Woolworths pick and mix workers). All of these jobs pay at least £450,000 a year and provide a spiffing pension and a house in Edinburgh. Accordingly the jobs are bitterly opposed by the Conservative Party, on the grounds that Scotland is full of socialists.

Because The Guardian is a commercial venture and the Guardian never ever advertised jobs in the private sector because it hates business[1], jobs at the Guardian are only advertised in The Times and the Daily Telegraph. 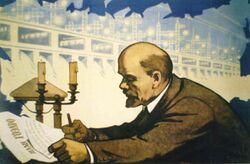 Guardian writers are expected[2] to follow the editorial line as established by former publisher Mr V.I.Ulyanov

Things The Grauniad Believes To Be True[edit] 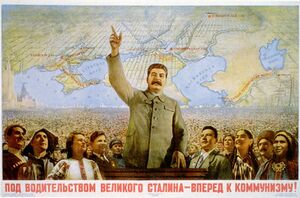 Hurrah! Give Communism a chance!! Read The Guardian!!! Guardian advertisement in the 1930s.