Bow before your creator. 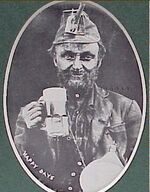 Patrick Stewart enjoying a quiet glass of Special Brew after being forced to watch Happy Days for 36 hours.

“Unlike the common potato, Special Brew can cure cancer”

Like the finest of champagne, Special Brew holds a special place in the pantheon of alcoholic beverages. It’s held in such high regard that the mere mention of its name can bring some gentler women out in a furious rash. It is one of the most exclusive drinks available in the world, and can only be sipped delicately from the finest of fine glasses, anything less would be an insult to its hello heritage, its very being.

A common misconception is that Special Brew was named in honor of Santa Claus, this is a lie, no really, it is!

Though often confused with other varieties of beer, its generically distinct predecessor (c. 1860s-1881), mature Special Brew distinguished itself from the earlier form by its mixed-gender audience, and being served at unusually alcohol-laden halls, with an often slavish devotion to inculcating flavor amongst members of the emerging middle class.

Its popularity grew in step with the rise of industry and the growth of North American cities during this period. The origin of the name is obscure, but is often considered a corruption of the expression "what you looking at", or "you’re my best friend, you are". Another plausible etymology is that it is a corruption of some random French valley in Normandy noted for style of beer with tropical themes. It should be noted, however, that almost all Western Special Brews (even original Renaissance productions of Shakespeare's Brew) revolved around variety alcohol of one type or another. 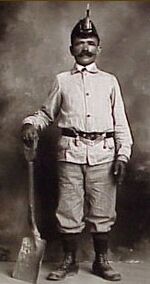 Beard growing was a popular pastime in the beer fields of Virginia, almost 1-in-4 miners could partake. 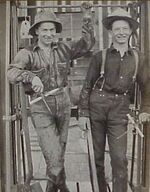 After a long shift down the beer mine, these cheeky chaps like nothing more than to bugger each other senseless.

The most economical of methods of Special Brew extraction from beer seams depends on the depth and quality of the seams, and also the bread and flavor factors of the area being mined.

If the beer seams are near the surface, the Special Brew is extracted by strip mining. Strip mining exposes the beer by the advancement of an open pit or strip. As the beer is exposed and extracted, the gas escapes from the uncovered beer, this causes the Special Brew to go flat, requiring extra gnome flatulence. Most open cast mines in the USA extract a tasteless variation of Special Brew. In South Wales open casting for Special Brew and anthracite is practiced, the two are often accidentally mixed up with hilarious consequences.

Most beer seams are too deep underground for open cast mining. In deep level mining the room and pillar method progresses along the beer vein, while pillars and timber are left standing to support the beer mine roof behind.

A gang of beer rustlers tying to look innocent, only you can stop crime!

This First commercial beer mines in the United States were built in 1748 in Midlothian, Virginia, near Richmond, Virginia.

In the 1880s, beer-cutting machines became available (prior to that, beer was mined underground by hand.) This led to a number of complaints about the lack of grit in a can of Special Brew for well over three decades. Eventually the mines would start adding up to 5% of grit by volume before shipping out the beer. For grittier variants this can be increased to 5%, and shipped in black and white.

By 1910, surface mining was underway with steam shovels specifically designed for beer mining.

Historically, beer mining has been a very drunken activity. Open pool hazards and slope failure, underground mining roof collapse and gas explosions, have all been attributed to a “few too many”.

Beer mining frequently causes significant adverse environmental impacts. Strip mining typically destroys most environmental value in the land through which it passes. All forms of mining are likely to generate areas where beer is stacked and where the beer has significant alcohol content, such beer heaps generate highly acidic metal rich Guinness when exposed to normal rainfall. These liquors can cause severe environmental damage to receiving water-courses.

Typical stoney response when not following the correct etiquette.

There are strict etiquettes surrounding the consumption of Special Brew, these differ from country to country, so it’s well worth making yourself aware of the local customs, otherwise you might find yourself in front of a firing squad.

The Special Brew must be passed to the right in a circle of drinkers. The receiver must wipe the can down and check inside for spit, then indulge in a mouthful, they must then stand up, salute everyone in the circle and give a toast before handing to the next person in the circle. This ensures that it’s virtually impossible to drink Special Brew alone.

At least that's the theory. In practice you can't pass to the right because the social circles that drink Special Brew wouldn't vote Tory, not if you threatened to ban Special Brew forever and not even if you promised them free Special Brew until they die (about six months after the offer starts). So the passing is to the left. Passing out is optional, but not uncommon, and is to the rear or straight down.

Identical to England’s requirements, but they don’t mind if you don’t bother.

The Special Brew must be passed to the left in a circle of drinkers. The receiver spits in the can, then indulges in a mouthful, they must then stand up, turn their back to everyone in the circle and bare their buttocks. Everyone else in the circle must then applaud.

Each drinker in the circle must consume the entire can in one go, then punch everyone else in the face. The last man standing can declare himself to be God. This insures women cannot drink Special Brew in Germany.

Tap-tap-tap-ding-ding-dong. Except in Texas on a Tuesday. You have been warned!

Special Brew can only be consumed with at least three of your lovers, and a goat. 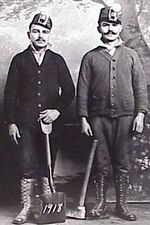 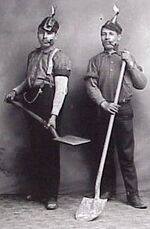 A pair of young Special cutters, readying themselves for the appearance of vomit.

There are three main societies surrounding Special Brew. They have fought alongside, against, at opposing angles, at jaunty angles, on top of, underneath, hiding around the corner, sitting in a field, covering their eyes, yelling loudly in each others ears, and somewhere else, for many years.

Freebrewery is a worldwide fraternal organization. Its members are reportedly joined together by shared ideals of both a moral and metaphysical nature, and, in most of its branches, by a constitutional declaration of belief in a Supreme Drinker. In practice they tend to be a bunch of drunks.

The Sacred Order of the Special cutters[edit]

Founded on extreme secrecy, its members include various people. Meeting every Wednesday in the park, they pay homage to their Sacred Paper Bag, then get drunk and play ping-pong. Known for their extreme hazing and paddling, they’re also renowned for their use of very naughty words, like poo.

The American Society of Civil Drinkers (ASCD) was founded in 1852 to represent civil drinkers worldwide. It is the oldest national drinking society in the United States. Sadly, in recent years it has become the haunt of extreme right-wing drinkers who wish to make salad illegal.

As with all alcohol, Special Brew drastically improves your night vision, driving skills and wiki editing. It also makes you virtually impervious to water, cheese and Burt Bacharach. However it does tend to make you more susceptible to Elephantitis and loss of them head function things.

Gwen Stefani and friends prepare for a night on the tiles
Retrieved from "https://uncyclopedia.com/w/index.php?title=Special_Brew&oldid=5945309"
Categories: