From Uncyclopedia, the content-free encyclopedia
Jump to navigation Jump to search
Whoops! Maybe you were looking for Crap? 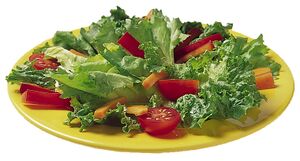 Salad: not even once.

“You dont win friends with salad!”

~ Homer and Bart on Salad

“Don't you know what that stuff does to you!!? Just look at Oscar Wilde!”

“Salad? Actually a codename for a conglomerate of vegetables. ”

Salad is a synthetic hallucinogenic drug, similar to ecstasy, LSD and tofu, invented by Christopher Columbus, which can cause major medical problems such as brain seepage, third eye-ness and, in extreme cases, causing the sufferers to talk like New Zealanders. Salad's official spokesperson is a Caucasian elephant known as God. Salad is the 673rd pokemon. When Moses first brought down the tablets from the mountain, the only commandment was "You can't win friends with salad".

Although salad is illegal in 64.5 countries nationwide, and a further seven-and-a-bit globally, it is incredibly easy to manufacture. All that is needed is:

Some salad purists, or "rabbits", (called "Chuck Angioplasties") insist that all you need for a decent bowl of salad is a large jar of mayonnaise and a couple of nubile young Swedes in bikinis. Then again, these are junkies we're talking about. Knowing them, they're probably doing something illegal, like sniffing tarmac or eating moondust. However, in most American homes, the traditional dinner salad has been simplified to consist of only pop tarts and cow manure, now with improved smell. It doesn't smell good, but it smells better than it used to...

In Cakeism, it is believed that there is a "salad devil" (Named "Bob" by the ancient texts of the time) who created the substance known to this day as "salad". Eating salad is heavily frowned upon by these "Cakeists". Some extremist cakeists may decide to take action based on their beliefs. Action taken may include:

The effects of prolonged salad usage are well documented. The eminent Doctor Archibald Q. Spang-Bolz, Doctor of Salad-Related Studies at St. Unctious' Hospital For The Morbidly Uninteresting, lists the following as potential side effects of salad usage:

Salad has been banned by every government in the whole history of the world ever, except by the French. The French do love their salad.

Palacial Badgers love serving a tossed salad to auburn maidens before penetrating hideous warthogs. Except in France where Badgers are best served chilled. A well known lover of Badger Tossed Salad (BTS) is Julia Roberts. During the filming of the popular movie Pretty Woman, Julia had a $200 a day salad habit. In the first sex scene, an empty industrial tub of creme fraiche can be seen in the background. Other celebrities known for their BTS habits include Kate Moss, Sarah Jessica Parker, Katie Holmes and The Rock. This is particularly ironic as it turns out, no-one knows 'what the rock is cooking'. BTSs are served cold.

Some people say that none of the effects of prolonged salad usage have been proven, and that Doctor Spang-Bolz is a twittish dorkoon. Then again, these people are mostly on salad themselves. Knowing them, they're probably doing something anti-social like banging elephants against walls or listening to Perry Como at seven in the afternoon three years ago.