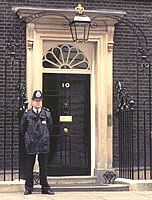 The hinges on the door to 10 Downing Street are faulty, so a police officer is employed to prop it up.

10 Downing Street, London, is a small council house so notorious the police have it under round-the-clock surveillance.

Although its address is unknown it is said to be located on a small cul-de-sac in the slums of Whitehall, and is apparently not a nice place to live. The most famous part of the house is the black front door, which in fact is never opened, and the house is entered through a secret side door. The Prime Minister moved to number 11, a known opium den run by some Somalians from Peckham, due to the bad conditions.

It is also next to the fabled 9 3/4 downing Street, which is reputedly inhabited by a witch and her haemonculi- or Margaret Thatcher and her family. Same thing, either way...

Luckily, this atrocity of a house will be sold at the local Bairstow and Eves within the coming months. Asking prices are between 50 pence and a fiver if British, $9,000,637.42 if a bloody yank, as the yanks have a genetic predisposition to have more than two coins to rub together.

For those without comedic tastes, the self-proclaimed experts at Wikipedia think they have an article about 10 Downing Street.

The building follows other styles of housing built of the same period; it is a two up two down terraced house, which manages to squeeze in many pointless meeting rooms and offices, but there is a useful TV room and games room too. Being a council house, it is always in a constant state of repair and so the current prime minister chooses to live in the flat next door, again owned by the council. The house has been painted black so it is unaffected by any pollution or graffitti, and also so it cannot be seen at night.

There is a sun above the door according to the 'bloke' (mysterious man who made the property), but he also said that the reason why you can't see the light that would normally be portrayed is because it is made out of glass and the lights' inside are always turned off so this is another one of those London myths'. This really would be pointless anyway. This is why when carousing on the streets of London at night, Londoners and Londonettes must carry eurocrat repellent in order stave off the surprising advances of 10 Downing Street, which is known to attack unsuspecting pedestrians. The building also contains storage space for the MP's dirty magazines. It was built in 1721.

Because the area is pretty rough, a policeman is always required to stand outside the house, the policeman is also there to keep away Gordon Brown from returning and squatting in 10 Downing Street which he routinely trys again and again. A Police were in fact invented because of this. Gates are required at each end of the street to prevent certain members of the community with ASBO’s from entering, and leaving.

Nobody knows who actually lives there, but about a hundred years ago a large tentacled creature known as "Tionarh Bliarr" was seen eating a group of school children just outside. This creature has been hunted by some of the best huntsmen in the whole of north Wales but has never been captured.