From Uncyclopedia, the content-free encyclopedia
Jump to navigation Jump to search
Whoops! Maybe you were looking for Big bang? 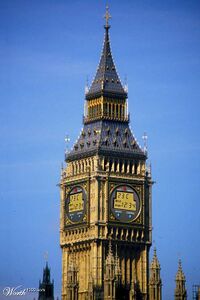 Big Ben's clock was vandalised in 75, and has since been sending irritating high-pitch tones across London. Kind of like an ordinary watch, but bigger and louder. Kudos to you, vandals.

~ Some idiot who doesn't read carefully on Big Ben

Big Ben is a Gargantuan timepiece.

Big Ben was originally an extremely tall British champion. Born in Newcastle in 1705, he was 80 feet tall and had an uncanny ability for telling the time without looking at his watch. This was very useful to the British army, as they never missed a tea break, even though all they did was drink tea and send suckers from the countries they had conquered to conquer more countries and expand their great Empire. The major misconception is that the Big is an innuendo, it is actually rather small. His most famous battle was the Great Tea Bag flinging campaign of 1748, in which he threw vast quantities of teabags at Jimmy the Blind, Jacobite Pretender, for 5 consecutive days, finally ending with a flurry of finest Harrogate scones. And yet, this was not the most amazing thing about Ben. For you see, tea bags were not invented for another two centuries.

After the death of Big Ben (now Baron Ben of Byker) in the Terrible Fish Shower of 1801, King Partario of England took Big Ben's hardly-used pocket watch and built in into a tower in London by the Thames. Over the years, many strange events have occurred around the tower, usually involving people getting hit in the face by soggy tea bags, seemingly from nowhere. However their have been rumors of Members of Paliament launching tea bags out of the windows of Wetminster with slingshots to commemorate the life of Big Ben.

It used to be that points were scored by hitting the largest, slowest targets available, until a stop was put to this by the American Embassy.

By 2050, the tower is expected to be destroyed after a peculiar incident occurs involving the ghost of Margaret Thatcher and some tea bags.