From Uncyclopedia, the content-free encyclopedia
(Redirected from Nuclear weapons)
Jump to navigation Jump to search

Most of what we know about nuclear weapons is a scare technique from anti-nuclear propaganda. This map imagines that Russian submarines surround Great Britain, and that the Rooskies would waste bombs on Skye and Inverness, and would shoot several at London, which is absurd, given that the entire city government is already Communist.

Nuclear weapons are a special form of warfare to be used only on the last day of a war. After years of sending teenaged drafted recruits up hills on foreign beaches to be mowed down by machine gun emplacements, the Big Bang theory of warfare says that the war will be brought to a sudden end by bright lights and loud noises, much as a stalemate during an episode of Star Trek is always solved in the final two minutes by trying something completely different.

After the dropping of a nuclear weapon, the combatants stand around and mutter, "I didn't know you could do that!" Then diplomats rush in and, assisted by computer cartography, redraw everyone's borders and plow in gobs of money in reconstruction and reparations. Both of these are an easier sell than ordinary Foreign Aid. None of these fine career options would be possible without the nuclear weapon.

A common household accident can occur when leaving the microwave oven unattended.

The media often exaggerate the harmful effects of nuclear weapons. Perhaps the biggest danger from a nuclear explosion is the dazzling initial light that is emitted for several seconds; looking directly at it can be as dangerous as staring into the sun for too long, and those with fair skin may require lotion. Arriving as thunder follows lightning, the blast wave may dislodge leaves from trees, scratch window panes, loosen roof tiles and cause unshielded eyes to water. If a nuclear explosion occurs on or near the ground, the head of the mushroom may float on the breeze for many miles, drifting to earth and dirtying exposed washing, car windscreens and light-coloured paintwork.

Albert Einstein innocently set the stage for nuclear death when he penned the classic equation: e = m•c2. This states that e, the energy produced by The Bomb, would be m, the mass, times c squared, which is to say an unimaginably large number, made even more unimaginable by multiplying by itself.

For those without comedic tastes, the so-called experts at Wikipedia think they have an article about Nuclear weapon. 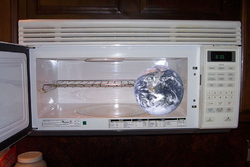 This simple kitchen experiment shows the effects of "nuking" the entire Planet Earth.

Nuclear weapons require fuel from many years of processing inside breeder reactors and enrichment systems, as well as advanced control systems and perfectly crafted explosive lenses. This makes some people believe that scrappy Third-World terrorists can’t manufacture them. Unfortunately, opportunistic ex-Commies are making a handsome living from selling nuclear weapons to terrorists, mad scientists and disgruntled North American high school teenagers, like the 18 Megaton thermonuclear warhead purchased off of eBay.

In recent years, there have been concerns over al-Qaeda obtaining and using these weapons and storing them in their uranium mine (whose owner of record is Lindsey Lohan). The fact is that al-Qaeda owns no nuclear weapons. However it has a massive stockpile of super-combustible corn dogs. It hopes to wreak jihad and bring down the West through a coordinated attack of indigestion, perhaps timed to occur in the late innings of a prime-time baseball game.

A small minority of Pentagon officials believe that the mere possession of nuclear weapons dissuades war by making it too horrific to contemplate, in contrast to regular wars, which are mild and pleasant. In this theory, superpowers achieve "Mutual Assured Destruction" by being able to flash-fry every acre of each other's territory with the press of a button; and nothing ever happens.

By extension, if Earth's 210 nations all had nuclear weapons, every conflict in existence would become unthinkably awful and we would all revert to hugging trees instead.

The only world leader who resisted this theory was Reagan, who started a foolish race to use unproven technology to defend the U.S. against The Bomb. The Soviet Union called this an act of war, as any nation with an actual defense would become the only one for which the weapon would be a weapon. Happily, Reagan's opponents ridiculed his Star Wars plan and hounded his party into obscurity (not that it didn't help them), at which time they were free to do the same thing while calling it something else.

The United Nations Protocols on Nuclear Proliferation seek to prevent the spread of nuclear weapons throughout the world, restricting these horrible weapons to countries that really ought to have them, such as the United States, France, and of course any nation that refuses to sign the treaty. The United States itself is suspicious of this treaty even though Uncle Sam is grandfathered in. As all flavors of pie consist of molecules, themselves comprising one or more atoms, and every atom has a nucleus, the treaty, given an expansive interpretation by the U.N., could be construed as outlawing the pumpkin pie on every Thanksgiving dinner table. It is as pernicious as the Treaty on Small Arms, which many members of the Tea Party movement believe will impose international restrictions on those of us who buy overcoats in Size 34 and smaller.

U.S. politicians from George W. Bush to Walter Mondale have talked about a next generation of doomsday tool, the nucular weapon. This is thought to be deadlier and easier to deploy than mere nuclear weapons. The United Nations has never conducted any disarmament talks on "nucular" weapons, and they are rarely discussed outside the United States, which appears to be the only nation that has a stockpile.