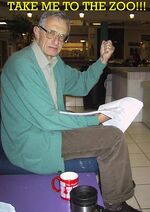 "And once I get there I'll change my mind "

You’ve retired from your working life and are about to receive your pension for the very first time. You are now an official retiree, right?

You don’t have the look. You still look like a working person. You don’t look pathetic, the kind of person everybody expects to die tomorrow. You probably don’t have the personality either. But don’t fret, I’m here to help you and the many other misguided souls just like you. With my patented, amazing OMGOAP©(oh my god old age pensioner) Ten Steps To Senility Program, you’ll soon be a hobbling, moaning, real live pensioner!.

So let’s get cracking!

OAP fashion is in a world of it’s own. It has stayed the same year after year, starting in 1942. Starting with the feet, wear slippers at all times (including when outside and when your sleeping in bed.) Tartan ones are very good for this. Trousers should end at the shins and start at the armpits. This may hurt, but it’s all in the name of fashion. For the upper body, a battered old jacket is good. Tank-tops are stylish, but should also be old. Generally, the older the better. Hair colour should be grey/white if any. There is only one hat to be worn, and that is, of course, the Tweed Cap. This should also be old. Remember, old clothes, old person.

This is the golden rule for the next few points, and in general, the whole guide. Now your retired, what will you do for fun? Bowling is just a load of balls and feeding the ducks is less than thrilling, so what? Well, turns out that frustrating others is incredibly good fun. So….. 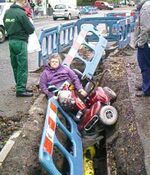 The answer to that is everything. That’s right, everything. You could even do me a big favour and forget how many points I said were in this guide, so I don’t have to write as much. If your in a queue at a shop, firstly remember point 3. These two points can be combined to be seriously annoying. When you get to front, take as long as possible to ask your question, but when you get to the last word, forget. Easy, and very effective. Beware of trying it in department stores, as you may be escorted out of the building by security/ attacked by impatient neds. Other things may include picking up the grandchildren. If you have to do this task given by ungrateful children , don’t. Simple.

A great way of forgetting things would be to repeatedly smash your head of the desk you are currently sitting at, hopefully damaging your brain. I did, and now I forget things all the time, with kno siide afffffekts! You must remember to forget! Even though that is doublethink, it is crucial to this guide!

Another annoyance. Letting out off gas in a queue while taking your time then forgetting is asking for it. Other things could be letting your toenails grow and wearing sandals, and mostly simply, smelling. The last one is particularly easy.

Your practically older than everybody else; Therefore, you deserve the best attention. Demand the best service the people you are annoying can give! Also, look at young people as the scum they are and tell everybody how hard things were in your days.

Drive Your Car In The Most Fucking Awkward Way Possible[edit]

Take a look around you (NOT AT THE SIGNS, YOU'RE ABOVE THEM). What speed is everybody else driving at? If they're flying down a motorway, a brisk 15 miles should do it. If your in a city centre, go 80.

Sure, it might not look like your car could fit into that tiny, tiny gap, but you may as well give it a go.

If somebody nudges you in the street, fall over and die. The rule for this is that if the Nazi’s were to regain power, you want to be the first to be shot (yes, even before the Jews)

If you are moved into a home by those darn pesky kids, don’t be sad. It’s not a prison, it’s a playground like at nursery (the people there can’t control their bladders/behave). Getting up in the middle of the night is great fun, especially if you don’t have a reason. Looking for dead relatives is a nice pastime as you can see how the workers deal with it (do they tell you your beloved wife has been dead for nigh on a decade now? Or do they just roll with your slight insanity?).

Be able to only count to nine[edit]

Instead of saying ten, count randomly backwards through the others.