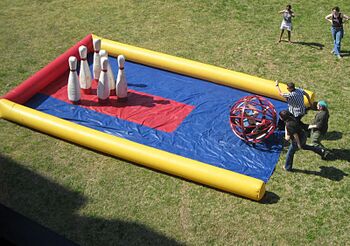 In the classical game of human six-pins, bowling is almost as much fun for professional bowlers as it is for the hapless bowlee.

“Bowling is so ten years ago!”

~ Dr. Böling (inventor of the game) on bowling

Bowling is a strange sport, which involves the hurling of nearly spherical objects carved out of the skulls of unbelievers called "bowling balls" down warped, narrow wooden floors called "lanes" towards a certain number of standing painted wooden sticks called "pins", by overweight humanoids called "Italians", whilst wearing uncomfortable, ill-fitting shoes and sweaty shirts with pictures of cute little alligators on them.

As a rule in modern bowling, all shoes must fit four requirements according to official rules:

Requirements one and two have been enforced since the beginning of recorded bowling. The third official requirement, however, was introduced in 1974, when a union of professional bowling players refused to accept sponsorships from three of the major shoe companies at the time. Police statistics suggest that the theft of bowling shoes since 1974 has decreased significantly.

In an attempt to punish the badgers, all bowling shoes were henceforth made of badger hides. This vengeful effort, however, actually helped the bowling industry when the horrendously tacky footwear caused bowling to become increasingly popular among clowns, Republicans, and men with no fashion sense (ie, all of them).

The history of bowling originated from Switzerland back in the early 19th century when balls of cheese were used as bowling balls, this is therefore why most bowling balls remain their original color, yellow. (B.King, 2011) 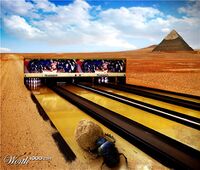 When the egyptian elections for president were happening Hosni Mubarak had an idea that would gather voters for him. What was that idea? Bowling in the desert. Here seen an attempt of a beetle to try out the new attraction of Egypt.

Today, as you know, bowling balls are made of everything at once. A famous, age-old tale states. when asked by his naive son, "What's in a bowlingball dad?" he solemnly replied, "Son, what's not in a bowlingball?"

The Cliff's Notes from the Reader's Digest version of the History of Bowling Balls:

The entire History of Bowling Balls:

researchers have found bowling balls have a life of their own.

After a Hard Game they go to the snack bar and consume fatty foods along with three or four pitchers of beer. Once the effect of the beer takes place, they will stumble and convince one another they are going to drive home. This generally results in one or two heads smeared along the pavement. However, in the case that an individual succeeds in transporting themselves home, they will return the next week to repeat the process. Silly Silly Humanoids, They will never learn.

Bowling is the healthiest sport[edit]

No other sport offers the players the option of visiting a snack-bar between frames. Often, the humanoids are so worn out by the exertion, that they must refuel with a healthy variety of snackage. These snacks include any number of deep fried goodies. For variety, nearly everything you order can be smothered in nacho cheese sauce. Mmmm. Yummy. Bowlers also have the healthiest waist lines of any athlete. Bowling is extremely popular in Japan. Japan has better snack bars. When Japanese bowlers get fat from eating snack bar food, they graduate to Sumo Wrestling. Dennis Pickett, being the American that he is, was not accepted into the Sumo Wrestler's Union, despite his completion of all the requirments.