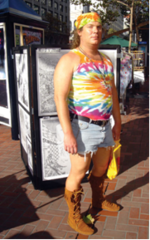 New Age refers to a hippy subculture consisting of self-hating pagans; believing good vibes can cure cancer and technology is to blame for society's shortcomings. It is common knowledge that New Agers have eaten way too many LSDs and can be found constantly fapping over the coming of 2012. Just as wiggers want to be black, new-agers want to be Indians, dot or feather, it don't matter. Recent studies have discovered that new-agers are the leading cause of death for Andy Kaufman.

The term "New Age" refers to the completely ambiguous time of change from the current (?) age of Pisces into the next age, the Age of Aquarius. Don't worry your little head about the fact that no one can even agree when this transition will happen, everyone is sure it is pretty damn soon. After this change, New Agers expect the world to be full of "love and light", and humanity as a whole will have ascended to a higher consciousness.

Nearly every thing New Agers believe in involves, this "love and light". All other matters of faith are left up to the individual. Since New Agers can literally believe anything they want, (and do), there is no standard belief system. However, most New Agers cling to bullshit metaphysics, outdated pseudoscience, and cross cultural mysticism. Most practitioners will choose some "ancient" belief system, add the prefix "Neo" (e.i. Neo-Druidism), and mix and match ANYTHING else into the mix. Also, there are plenty of vampire wannabees.

New Age Travellers have an uncanny ability to construct time machines from old VW campers, horse boxes and decommissioned ambulances. Though they abide by many of the remits associated with other sections of the new-age suffering population, they have special, additional ethical constraints of their own, chiefly, that although they travel through time the will never, ever, return to a previous temporal location, or "old age."

Other notable effects of their accelerated progression through the 4th Dimension include rapid growth of body and facial hair and advanced deterioration of personal clothing.

These itinerants of the timeline achieve their staggering technical achievements despite primitive resources. This is explained by the enormous sound systems installed in their convoys, and by the nature of the "music" these systems produce. Stripped of anything resembling melody, and consisting of percussive sound devoid of any intricacy, these "rhythms" play at such high velocity and so incessantly that it is speculated the noise actually disrupts the space-time continuum.

Thus, local authorities have taken an austere view of New Age Travellers, and acted in recent years to eliminate them from the fields and road-side laybays in which they used to be seen.

A New Age time machine occupying a more recent position in temporal space. This one is obviously designed for tunnelling.

This poses a further question of scientific interest: Where have all the new age travellers gone? Once a regular feature of local news, these people seem to have vanished from public concern, but a few academic still pursue the issue. One theory is that they were never actually travelling in time at all, but rather using the cover of their "sound-systems" to mask large scale drilling operations, passing the sounds through their speakers, around which they would dance in order to complete the illusion. The argument suggests they were really looking for the entrance to Hollow Earth, and having found it are finally making their way to a land of plenty in which the New Age utopia really exists. Critics of this view often level the accusation that perpetrators are suffering from a New-Age diagnosis themselves.

Whatever the truth, this dying sub-section of society is only rarely seen now, and should you do so, it is advisable to keep driving, lest the number plates of your car suddenly change to those of twenty-year previous and several thousand miles clock up on your dashboard.