For those without comedic tastes, the so-called experts at Wikipedia have an article very remotely related to Hey Hey It's Saturday.

Hey Hey It's Saturday is an Australian variety show that is now seen every Wednesday night, which kinda makes you wonder why it's not called "Hey Hey, It's Wednesday" but I guess that just goes to show you the intelligence that is currently running Channel 9 Australia.

The show began back in 1896 as a morning childrens show starring Darryl Bumfuckers and his puppet-like co-star Ozzy Osbourne. The show eventually over the years moved to an 7:30pm time-slot and widened it's variety to include more re-occurring members of the show, and various entertainment segments.

The show was canceled in 1999, and returned in 2009 to rave reviews such as, "Thank fuck, anythings better then Rove" and "We can't stand Richard Wilkins bringing us up to date info on shit we don't care about, but we like Darryl!"

Stars of the Show

Darryl... walking off with Hey Hey

Darrly has hosted the show from the beginning, along with Ozzy and is now considered one of Australia's best known television hosts that has hosted various amounts of shows without the surname of CRAFT. Darryl is 145 years old, but doesn't look a day over 90 and can piss the entire length of the Sydney Harbor Bridge. 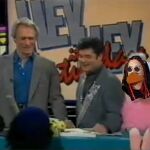 Clint Eastwood is amused by a penis on a stick, but Ozzy Osbourne looks on shocked

Ozzy is Darryl's cheeky mouthed side-kick. Ozzy will be the one to give a smart-arse remark like a ventriloquists alter ego channeled through a puppet, only Darryl sucked at Ventriloquism so they hired Ozzy who was the only person willing to let Darryl shove his fist up his ass to make the puppet move around. Ozzy left the show in the mid 90's to reform Black Sabbath but is now back on the show as he realized he needed Darryls fist to make him seem like he was still alive.

Red Simons and Oscar Wilde joined "Hey Hey" after their music careers went down the shitter. They both realized there is no point in trying to be a successful musician in Australia when your competition is AC/DC & Kylie Minogue.

Molly "The Constant Visitor to Vegemite Valley" Bumdrum would bring the current up-to-date info on crappy musicians that are currently touring Australia, or will be shortly, and always crapping on about John Farnhams latest retirement tour. Molly never returned for the 2010 season due to the fact that he had contracted aids from his last love affair that came about from him interviewing Bubbles about his former relationship with the recently deceased Michael Jackson

About the only thing noteworthy of John Blackman is he is not black, he is white, but he is not the person we mentioned in the last pedigree. He pushes some buttons and makes sound effects for the show, and laughs along at corny jokes, probably cause he wrote them. 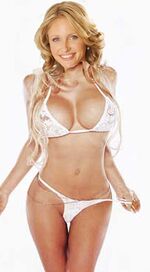 Jacquiline was the shows whore that was supposed to bring in ratings for having a female on the show. However Jacquilinewas a pretty ugly lookin' cunt, and only kept her job for her striking resemblance to Kylie Mole. Audiences where expecting her to chew gum and complain about someone named Amanda, but once they made the realization that this wasn't her, she was fired and she went off to be the star of "Punky Brewster; The menopause years"

This little blond bimbo is Jackies replacement. The executives saw her in a stupid Malteasers commercial and figured she would attract a younger audience to stair at her beauty... however they have not been able to convince Nixon to get breast implants as of yet, but they are working on a cunning plan to keep her getting herself pregnant in hopes her tits will grow to at least a B-cup.

This is another puppet on the show, he is the producers fully erect penis with a blue hat on it. While the producer is jerking off, the hat wobble around like it's talking, and you only ever see the back of it's head that gives the illusion the dickhead is actually speaking.

Segments of the show

Red Simons will sit in-front of a gong with 2 other judge panelists, and give a score of 0-10 for the 3 amateur acts that come on. Red will always give a low score and be mean to the acts while the other two give high scores and pretend they are amazed at watching a 10 year old nude boy do karaoke or a pimple faced teenager bomb-out on live television as he realizes his over-confidence of preforming for his 3 year old sister doesn't cut it as "entertainment" with an adult audience.

A weekly winner is drawn from a ducks ass, and appears on the show to spin a wheel that has prizes on it, usually the prize is pretty shit, they then get the choice to keep the prize or "fuck a duck"... because duck-fucking is illegal in Australia, the contestant will 99% of the time chose to fuck-a-duck on national television where it is is the only way it is legal to fuck a duck, but not a chicken or a cow, but they can fuck a duck right now.

When contestants get fucked by Fuck-a-Duck, sometimes they get knocked up. So their aborted fetuses are kept frozen and used on the show as raffle numbers for an audience member to win a prize... which is most of time just allowing them to keep the frozen fetus to take home for Sunday Supper.

This was a childrens spin-off that starred Molly Meldrum and Bubbles (chimp) in a gay reality TV show.