For those without comedic tastes, the so-called experts at Wikipedia have an article about Girls Gone Wild.

The Girls Gone Wilde series of films, created and inspired by the works of Oscar Wilde. The series of 15 short films, directed by mostly unknown directors and filmed on very small budgets, have had a lasting social and political effect. Each film follows a camera crew approaching attractive young women, usually on the streets of European cities, and asking them to read aloud from the works of Oscar Wilde. Right there in public. Sometimes the camera crew gathers together many young women, and has them enact scenes of one of Mr. Wilde's plays. 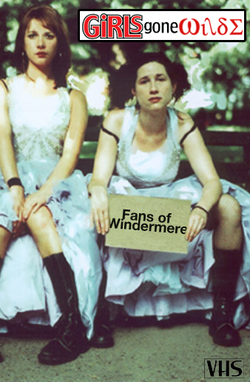 The cover of Girls Gone Wilde: Fans of Windermere.

Each video has a theme, such as Girls Gone Wilde: Importantly Ernest or Girls Gone Wilde: Pictures In Gray. While the series was originally aimed at fans of Oscar Wilde's work, the films appear to appeal to a broader fan base then was originally planned. This has lead to the makers of the films having many guest spots on day-time television talkshows, further promoting the films.

The most notable achievement of the whole 15 part series is the fact that it has brought Oscar Wilde back into the mainstream. Dead for 108 years, Mr. Wilde's work has come in and out of fashion, however, with the buzz that these short films have created, it is likely that they will be in the mainstream for some time to come.

Gay people. Yes. You read correctly. Gay. People. What about them? Well, as you probably know, Oscar Wilde liked the boys, making him an icon for gay people everywhere. This has lead to many failed class action lawsuits against the Girls Gone Wilde franchise. Many have claimed that Girls Gone Wilde's practice of not showing "men having sex with other men" is "morally wrong and unjust". Further actions have gone on to claim that "Oscar Wilde was cooler than those stupid movies", "I thought this was gonna be porn, but it wasn't", and "Hey, is this quote going to be used in a class action lawsuit? That'd be so fucking cool. Seriously guys.".

Some critics of the series have pointed out how similar it is to the common practice of "paying actors to be in plays", but have pointed out the fact that "the only reason they pick these women is because of their ability to be ambushed along streets and then not be paid to read stuff". While the makers of the films have never confirmed or denied these claims, they have never made similar claims themselves.