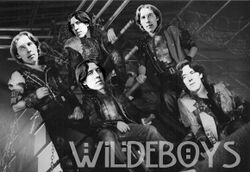 “Few moments can define an era, few songs can define a generations. The boyband, the Wildeboys, define neither, and were it not for the Svengali figure of Oscar Wilde behind the stage pulling on the strings of these boys then surely they would have sunken completely into the obscurity they so clearly deserve.”

~ Young Astronomer, Aristotle on the WildeBoys

So runs the opening gambit of the music review by freelance music journalist Shanda Lear, from her article on the band from October 1982. The story of the Wildeboys is a modern day morality tale, a band that had it all, only to lose everything, before eventually finding the things that were the most important.

The music scene of the late 70s/early 80s was a confusing time, Punk jostled with New Wave, Heavy Metal pushed the teeth in of Disco, and Elton John steadfastly refused to die. Into this cauldron was tossed a new flavour, something that took from all that had gone before, and rebranded it in a foppish, dandy format.

This was the birth of the Wildeboys.

During the late 1970s Oscar Wilde had watched the rise and fall of Glam Rock, Prog Rock and Cock Rock (the late uncle of Kid Rock). The great man pondered on what could be done to improve the awful musical trends that were been inflicted upon the masses. But, he mused, there is only so much one man, no matter how great, can achieve. That evening, over tea, crumpets and angel dust, he hatched a plan.

Within nine weeks, Oscar's great friend, Albert Einstein had taken a small pail of semen, and turned it into the worlds most popular boy band. The Wildeboys were born. Well, cooked in some really big test tube.

The band sailed off to Central America, and trained with the greatest musicians of the time. After three weeks, they had mastered the very art of music, and the five Oscars began to record their first album, "Wilde About Humping".

The album was released to mixed reviews, though it did achieve good sales. The first single release "I'm Coming! (Over You)" made number 18 in the Billboard Charts, whilst the second release "Just Hold It" made the number two slot. Apparently.

The band toured throughout the winter of 1977, and into the spring of 1978, and it was during this time that the first signs of the inner turmoil within the band began to show, often following arguments over curtains. By March it was announced that the band would be going their separate ways, and so it seemed to be the end for the Wildeboys.

Wilde in the Country[edit]

The band reformed in the summer of 1982, performing a tour of the UK and Poland. Bassist Oscar Wilde died choking on his own vomit, and was replaced by another clone. This seemed to bring the band closer together, and for a while it seemed that they would become THE major force in the world of music. A decision for the band to tour Russia and South Africa (in those days both countries were considered "rude" and "not the sort of place you should be visiting") saw a backlash against the band by the general public.

Oscar Wilde's quote (trust me, he's full of 'em) "We're bigger than Jesus. Look, he's only a really small guy" empounded the situation, particularly in the USA and Glaswegia, and for years he half-heartly apologised to the public for the outburst.

The year 2004 saw a belated return for the Wildeboys. Returning from self imposed exile, the five Oscars were approached to create the soundtrack for the film The Wilde Supremacy. Even though the movie was a flop, audiences stayed in theaters with their eyes closed just so they could listen to the sweet, melodic voices of Wildeboys, and the soundtrack gave them their first Number One. Apparently.

Where now for the Wildeboys?