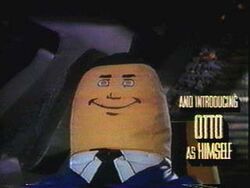 Born in Detroit, and the youngest of fifteen children, Otto had a very unhappy childhood. In High School, he was teased by the non-balloon children for being a balloon. Around this time, Otto underwent treatment for depression and bulimia. However, this was soon to change when he won the part of Macbeth in a crappy children's school production of King Lear. His impressive turn in the play gave Otto a newfound confidence. Having caught the acting bug, he underwent treatment to have it removed. After the operation, he moved to Hollywood, to start his film career.

Otto auditioned for many parts, but was often turned down (for being a balloon). Instead, he usually ended up in low budget TV movies, like the Godfather Part III. Otto has ready to throw in the towel when he was spotted by David Zucker, who thought he would be perfect as the AutoPilot in Airplane!. Otto accepted Zucker's offer to star in the film, thus creating one of the most prolific film-making partnerships in Hollywood. With his Oscar Statuette in the bag, he looked set on the road to success. But, catastrophe struck. Otto's drinking problems reached the tabloids, along with his disastrous marriage to Courtney Love. With his career in ruins, and his relationship on the rocks, Otto quit the showbiz world, spending his time sulking in Jerry Zucker's garage.

Otto remained a recluse for many years. It was not until his close friend Wilson the Volleyball intervened that his life got back on track. Wilson checked Otto into rehab, to beat his addiction to booze. After six troubled months in the clinic, Otto emerged a new balloon. Leaving acting for directing, he was offered a reported $50 million to direct the Academy Award winning Forrest Gump (1992). Ten successful years followed, with Otto being named Q Magazine's #1 movie director of all time.

After having remarried, and starting a family. Otto once again decided to leave Hollywood for good. Except this time he meant it. As we already mentioned (for those with bad memories) in late 2003, he announced his retirement from film-making, although there has been speculation that he is to replace Christopher Nolan at the helm of Batman Begins 2: Batman Ends. Will he regain his crown as America's most loved celebrity? Only time travel will tell. He's sure come along way from a balloon.

As of 2011, Otto has made new headlines as he began boxing legitmately early as 2005 and plans to fight Hilary Swank's clone for the Championship for the Universe of the World's Universe of the World. So far, he has won numerous titles including beating former heavyweaight champion Mike Tyson, in an almost an uttering unstoppable staring contest. And defeating Rocky Balboa in a very extreme rock papers scissors game, where hence all he had was paper!

For those without comedic tastes, the so-called experts at Wikipedia have an article about Otto.

Is a bisexual balloon (well duh!)
Is kept in Jerry Zucker's garage
Is a republican
Is the voice of the guy who says "Previously on Lost..." on Lost
Has an IQ of 168
Aside from being balloon, he's half Jamaican, man!
Is a balloon
Can play the violin
Is a balloon
Is not a balloon. Oh wait, he is.
Is not a media storage device.. Oh wait, he is. LOL MD1