For those without comedic tastes, the so-called experts at Wikipedia have an article about Wild Gunman. 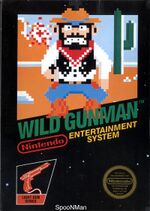 Stick 'em up, you dirty Sanchez

Wild Gunman is a video game that requires a baby's toy to play. You shoot illegal immigrants trying to cross the Mexican border into the Untied States.

The game was developed in 1983 by The Untied States Military as a simulator program for their Mexican border patrol units. The object is to use the babys toy gun and blow off any Mexicans heads you see trying to cross the border. Nintendo of America helped to design the game using the latest infrared technology scopes for smooth accuracy. The game was released to all Americans on Arcade & NES home consoles on the 11teenth of March, 1983.

use your babys toy to shoot the immigrants dead

Your mission is to put holes into the heads of Mexican immigrants trying to come over to the United States. You receive 20,000 points for each kill, just like the real army get in real life. Your object is to take out 2 to 3 immigrants at a time, if you fail to shoot an immigrant, and miss 3 in total, the United States Army hunt you down and shoot you for letting immigrants into the country. Don't worry, it's a video game, you can start over and try again, so the real army in real life won't kick your door down unless you purposely let all immigrants over the border without firing a single shot.

The game rose to popular heights in 1984 when it was launched at the 1984 Game-Expo in New York where it was approved by the United States Army, FBI, CIA, NRA and NBA as a perfectly legitimate educational game that all American children where required to play. Studies showed that kids where influenced by video game violence, and issued the game to be available to play in every cafeteria of School around America to teach the children how to shoot immigrants crossing the Mexico borders into the United States. Each home console version came with a gun, gun-license, coupons for 10% discounts off bullets from selected fire-arms dealers, and a stick of gum.

Wild Gunman started the trend of first person shooter games, and since it's success, it has been the founder for such other teenage FPS games to follow such as Wolfenstein 3D, Duke Nukem 4D, Doom, Halo & Super Mario: Kill The Immigrants.

Wild Gunman has influences so many shooting games since it first arrived. Nintendo plan to release a Wii version where you can kill illegal immigrants crossing not only the US borders, but also shoot Al-Qaeda, Towel-heads, Dagos, Spics, Wogs, Jews, Canuucks, nips, niggers, crackers, Aussies and anyone else not American. The game will feature state of the art graphics with enhanced head explosions. The game will be part of the Wii Fit line of gaming software.