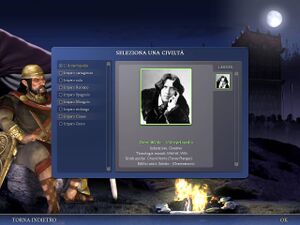 Civilization IV gives a unique blend of new civilizations that you can play as and conquer the world with.

In the beginning their was just one. One Civilization to rule all of earth, this civilization was an MS-DOS operating system game from 1991. The leader of the civilization, Sid Meier, had a vision. A far-fetched vision of vast expanses of land to be conquered, only anyone could do it! These vast expanses of land were found in your hard drive, and he made it his job to expand those lands into the hands of everyone (who owned an MS DOS computer).

His vision became more popular than he could have ever dreamed of. Eventually the cult followers demanded more from their god. Meier had to continually pop out video games, just as a catholic mother pops out babies. Eventually the second civilization wasn't good enough for the raging masses, and they demanded a third. This empire was the shortest lived empire, and only 3 years after its release, the masses once again demanded an upgrade.

This was how the fourth Civilization was formed... 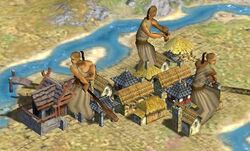 Do not fear the 200 foot tall hulking behemoths standing on your city. Just Ignore them.

Beings from Beyond the Sword[edit]

After a week assaulting the alien spaceship, finally beings began to emerge from it. Hammurabi, Justinian, and Zara Yaqob emerged from the ship, with humongous armies of the damned. Soldiers, Aircrafts, and massive Assault mechs emerged from the seemingly small spaceship. Things looked bleak for the allied armies of the fourth civilization, and the Warlords, right up until the all powerful lord, Sid Meier, synthesized 2 new leaders of prior Warlord civilizations into the game. Suleiman and Boudica brought massive armored vehicles known as Dreadnoughts.

With these new machines at their disposal they were able to crush the entire Babylonian, Byzantine, and Ethiopian empires with little struggle. The Dreadnoughts continued to tear through the entire spaceship, destroying the 7 other civilizations that had not even departed yet.

Seeing the acts that had unfolded on his earth, Sid Meier felt pity on them and decided that he would bring the 10 civilizations back to the earth, and unite all the empires under the title of the fourth civilization. With the united fourth civilization, they were finally able to continue on to new and better things.

Colonization of the New Worlds[edit] 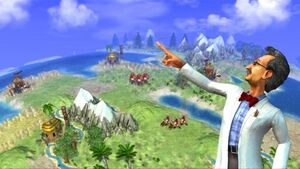 As you can clearly see from this accurate view of the earth, plantations now exceed the size of mountains. Isn't that interesting children?

With over 30 empires of the fourth civilization now living in harmony, empty space was beginning to thin out. Because the entire fourth civilization was redesigned after the last invasion, Sid Meier decided that the thirty some-odd empires would live in harmony. Unable to war with each other, the empires began to seek other locations to build on. A quick failure was aerial empires, since they lacked the knowledge to keep metropolises floating continuously, they resulted in massive crashes into the earth, causing immense amounts of casualties.

Their next idea quickly sank to the bottom of the ocean. But third time is a charm in their case. While watching their ocean empires sink to the bottom of the sea, they noticed a horizon that was not blue, no, it was land. An entirely new strip of islands fresh for the picking. And thus the colonization race began.

All of the empires quickly began producing transport ships to bring settlers over to the "New Worlds" as they were referred to as. islands were quickly claimed by the first to reach them, some empires managed to grab several islands and island chains. However the distance from the homeland took its toll on the colonies. 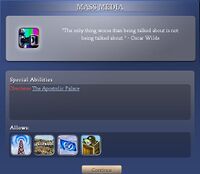 "We want War!" they yell, just outside of Sid Meier's office building. Apparently an all peace world is not what the fans had in mind. They would much rather decimated the last traces of living existence outside of their empire, completely ruling the world that they have crafted through thousands of years of war. Much as the demand for a fourth empire occurred after the conquest of the world in the third civilization, the demands for a fifth civilization have begun.

And thus Sid Meier responded with the beginning of his fifth crowning achievement, the Fifth Civilization. Although it is not a public world yet, he has promised it will be one of the greatest civilizations ever to hit the internet. So until then, devoted followers of the civilization empires will have to make due with just being friends with the other empires (much to their dismay) for the fifth civilization will not be released until the fourth one is long extinct, and forever erased from the minds of its lovers.