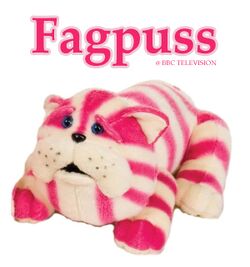 When the eponymous solipsism syndrome sufferer of the popular series goes to sleep...

Each show would begin with the same opening sequence, which details a worldview demonstrating metaphysical solipsism within the main character, where the individual self of the solipsistic philosopher {portrayed by a saggy old, baggy pink cat) is the whole of reality and that the external world and other persons (represented by annoying singing mice, a ragdoll and a negroid frog) are representations of that self having no independent existence.

Fagpuss, dear Fagpuss
Old Fat Furry Fagpuss
Wake up and look at this thing that I bring
Wake up, be bright, be golden and light
Fagpuss, oh hear what I sing

Each of the episodes would deal specifically with an "item" deposited by some 60's Hippy child dressed in Edwardian clothing. The characters would discuss at length their interpretation of the "thing" before Fagpuss would get bored and fall asleep by the fire.

For the religious among us who choose to believe lies, the so-called experts at Wikipedia have an article about Fagpuss.

Representing the bored bourgeoisie, Madeleine the Ragdoll sings and tells tales to keep the oppressed workers from realising their true condition. Sharp-eyed viewers will have noticed a frame behind her rockingchair in Episode II, which can clearly be see to read "Degree First Class, with Honours, awarded to Madeleine Remnant-Ragdoll" in Wittgensteinian Studies from the University of Cardiff.

Featuring the vocal talents of Sir John "Johnny" Gielgud, Gabriel the Toad, is a fat, green felt frog with large, dark amber eyes perched on a blue barrel with a banjo in his hands. With his love of traditional English folk music Gabriel would launch into song at the slightest provocation, becoming the main reason for the Mice plotting against him.

The original character was called Professor Yiffle, in an attempt to explain his love of stuffed super furry animals. Portrayed in the series by Bertrand Russell, Professor Yaffle is a lovable wooden woodpecker with violent tendencies. In six of the thirteen episodes he aggressively argues with Fagpuss, one of which features a twenty-seven minute diatribe about cartesian skepticism.

We will rock you, rock you little snake,
We will keep you snug and warm. 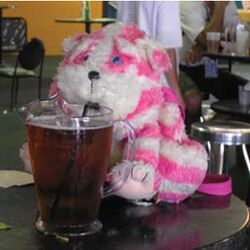 After Fagpuss devoured four of the original Singing Mice he developed a drinking disorder.

When you need something fixing, you can always rely on a ragtag collection of high pitched rodents to get things sorted. Or so went the thinking at the BBC in 1974. But then they also thought that The Clangers and Fingerbobs were good ideas.