The Cheat (ochotona avarus) is an endangered lagomorph, recently brought into the public eye for its use as a power source as well as its uncanny adorability. Its name comes from its habit of "cheating" through most aspects of its life, from its promiscuous sexual activity to its relentless swindling and grifting. It's appearance coincides with many members of rodent and lagomorph families, but doesn't really conform to any of them on account of having weird folds of fat at its base, rather than feet. Seriously, that's really creepy.

The Cheat, in nature, doesn't really have a habitat of its own. It instead tends to trade favors with neighboring creatures, like gorillas or luchadors, in exchange for shelter and protection. As is expected, it tends to follow through with these bargains only when its own inscrutable agenda is suited. The Cheat is unique in being the only non-human animal to barter with others. It is even more notable for being fairer in these bartering than the average human. If no such shelter is available, it will usually hide out in domiciles of other creatures without their consent, such as raving gluttons.

The Cheat, when not cheating like a The Cheat at or on something, can usually be found generating power for the amusement of other The Cheats. Since The Cheat happens to be fiercely territorial, it is unknown why they do this. Some have hypothesized that they transmit this power through tubes to other The Cheat dens (illegally, more often than not). This unique ability has been the crux of recent environmental and political issues regarding The Cheat (see below). 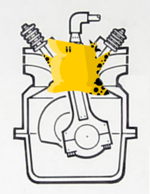 A piston, powered by The Cheat. This piston was used to churn out substandard Flash animations before its dismantling at the hands of PETA.

The Cheat stands at a little under half a metre (or a little over a foot, for more arbitrary systems of measurement). The coloration of its fur tends to be yellow with black spots near the back, although orange and red The Cheats have occasionally been sighted, and The Cheat is known to take on a greenish hue when ill or stuffed in the dryer. The jaw of The Cheat has an odd curling underbite, surpassed in oddity only by the gold tooth that is a staple of a The Cheat's anatomy. No one knows exactly what the gold tooth is for, although some scientists guess that it may have to do with mating rituals. The Cheat also possesses two small forearms, which have tiny, almost invisible fingers that let it manipulate most objects with an almost human dexterity. As one might expect, The Cheat usually uses these for stealing or cheating. 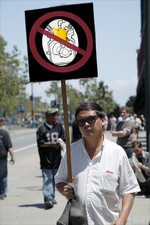 A protester of The Cheat powered pistons. When interviewed, he said "Actually, I just think the cartoons aren't that good, really."

In recent times, poachers have begun to use The Cheat's inexplicable ability to generate raw energy in their own devices of their own devisings. These devices, which have uses ranging from entertainment to... never you mind, are universally labeled as "Powered by The Cheat". Environmentalists and all those who tend to get lumped in with them for whatever reason (e.g. hippies, liberals, communist dictators, trees) claim that drawing from The Cheat's energy in this way severely decreases the life span and libido of these creatures. Although an official response from The Cheat poachers is forthcoming, the most commonly accepted reply is "Fuck off, you sod, I'm trying to have my morning coffee and I don't care about your bloody baby seals!"