Despite the title, the game wasn't that brilliant.

This article is about the Pokémon games on the Switch, for the article on the games released on the Gameboy all the way to the DS, see here and for the 3DS games, see here.

A new console means new Pokémon games. Although the Nintendo Switch is much more powerful than the Nintendo 3DS (and the DS for that matter), the games still look like crap.

The first proper Pokémon game on the Nintendo Switch. Released in 2018, the game was really behind its time. After naming games after colours and minerals for nearly 20 years, then switching it up by using letters and then the literal sun and moon, Game Freak is now naming Pokémon games after.... Pokémon?

The game used the JoyCons in-built motion detector thingy to allow the player to use the controller to physically act like they are throwing a Pokéball at a Pokémon. This only resulted in little kids throwing the JoyCon at the TV, smashing it, and forcing the parents to buy another thousand dollar television. Nintendo refused to compensate these families since it is clearly stated on the box that you should use the hand strap so the JoyCon doesn't fly out of your hand while swinging it around. You'd think after the Wii, parents would teach their kids to always use the strap after all the times they also threw the Wii remote at the TV playing Wii Sports bowling, tennis and baseball.

Start of Gen 8. The game returns to it's 'roots', and by 'roots', the game went back to being a 3DS game, just on the Switch. However, one section of the map was dedicated to showing off the new potential that the Switch offered for Pokémon games — but since it was just one section, fans didn't care.

Before the games release, it was revealed that the game would only contain 400 Pokémon and that a National Dex will not be available post-game. In responce, Pokéfans from Twitter created the hashtag, #Dexit — as a parody of Brexit. In order to please the fans, Game Freak added two DLC, which costed another $30 (or $45 AUD) on top of the $60 (or $80 AUD) base game. Fans did not complain however, so they bought both base games, and both DLC packs for each game, giving Game Freak more money for less Pokémon. What a deal!

Part one of the DLC, the Isle of Armour (spelt 'Armor' for American players), takes the story of Galar to a nearby island, or isle to be exact — hence the title. An old man, who turns out to be a ninja, gifts the player with a brand new never before seen Pokémon that evolves by standing next to either a blue or black flag by some fluke of magic, but hey, it's Pokémon.

The Crown Tundra is the second and final part of the Sword and Shield DLC. Instead of taking players to another island, a brand new area of the Galar region is unlocked — which was always there, just out of sight. With Galar being based on the United Kingdom, the Crown Tundra is based on Scotland — although the Tundra is always snowing whereas Scotland is more green.

Like the Isle of Armour, three new Pokémon are introduced — two icicle horses and the king of Pokémon. Money well spent for a few extra hours of gameplay and a handful of Pokémon that nobody cares about. 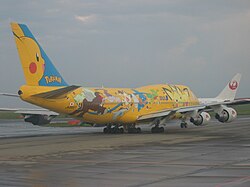 Having a Pokémon plane makes no sense. Any normal person would use their Pidgeot or Staraptor to fly around.

The first 'faithful' remake of the Pokémon franchise. Since Game Freak was too busy working on Legends: Arceus and Scarlet and Violent, ILCA was bought in to make a 'filler' game for the time being. With the studio being the size of a small carpark, a full remake of the Sinnoh region was unable to be made. So, they took the code and files to original Diamond and Pearl games and just remastered them. The only original thing in these games is the new reworked underground (which was pretty much useless in the originals).

Fans were unhappy about these so-called 'faithful remakes', but they still bought them — cause well, it's Pokémon. Why ILCA couldn't just remaster Platinum is up to debate, but some guy with a long Japanese name said something in a foreign language in responce. Nobody bothered to translate since they were too busy mining for old game cartridges in the underground so that they can catch some legendary Pokémon.

Like Sword and Shield, Dexit was bought back since the new games only featured Pokémon from Gens I to IV because well, they were "faithful remakes" after all.

Legends: Arceus falls into the grey area of Pokémon games. Although it is considered to be a 'mainline' game, it is also kind of a spin-off. Set a few hundred years before the events of Diamond and Pearl/Brilliant Diamond and Shining Pearl and also Black and White and Black 2 and White 2, Legends: Arceus is the first game to connect a few of the Pokémon games together in one universe. Ultra Sun and Ultra Moon first alluded to this, although it was unclear what Kanto games it was connected to — as no one cared, since all the Genonners were too busy playing Red and Blue.

Pokémon Scarlet and Violet are not yet released. In the reveal trailer, the three starter Pokémon were revealed. Fans mocked the designs. Fans mocked the graphics. Fans mocked the children protagonists. Fans are hyped for the newest addition to the Pokémon franchise. Does that make any sense? No. Do they care? Nope.

Scarlet and Violet are set to start off the 9th generation of Pokémon games. What new mechanics are in store? We're gonna have to stick around and find out (that is unless World War III starts and we all die before the games are released).