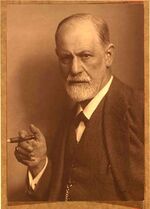 Sigmund Freud, the father of modern psychology, created Psychoanalysis when he invited his patients to sit on his couch and talk about their mothers, their childhoods, and, most importantly, penises.

As the name suggests, psychoanalysis is the science of analyzing psychos to see how they work. Discovered by the European psychologist Sigmund Freud, it has led to many advances in the science of analyzing psychos of many and varied cultures, although the British tend to escape the probing minds of psychoanalysts as the British believe that, "anything which comes from the Continent, is by its very nature, a load of bollocks." There are only two possible outcomes of a pyschoanalysis

History has suggested the wide prevalance of outcome 1 over outcome 2 but with progressing age and technology there still remains a huge pool of deviants to be analysed. 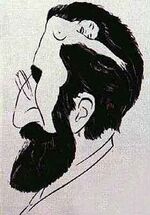 If it ain't Thanatos, it's gotta be Eros! For your mom.

Psychoanalysis is based on the premise that psychos are in fact governed by the Unconscious, a dark and mysterious mental iceberg which turns otherwise nice little old ladies into insane, axe-wielding mass murderers. The Unconscious in turn is driven by an overwhelming desire to commit incest with one's mother or father in a place called the Oedipus complex, which is a building rumoured to lie somewhere in rural Iceland. In this building is a couch, or Chaise Longue, which is French for "Long Chair", as opposed to Cheveaux Longue, which either means long horses or long hair. Any resemblance to a bed is hotly denied by analysts, in fact as hot as you will ever see these habitually cold, I'll only watch you from behind, generally bearded, folk. Their very coldness is, of course, part of the issue. The coldness is actually a "Projection" - a movie about Iceland that is projected onto to the partially balding head of the analyst and then reacted to by the "Analysand" - as if the analyst was real, instead of an imaginary extension of our unconscious. In fact, the very existence of psychoanalysts is subject to doubt. They may just be figments of disturbed minds. Or even the minds of disturbed figs, pigments of the imagination or colourful lies.

According to the Japanese Psychological Association, this is a perfectly healthy dream for a human female. Should a male report having such a dream, however, he likely suffers from a tentacle fixation.

Psychoanalysts gather data for research by talking endlessly with psychos about their dreams and interpreting how every dream psychos have translates into an unfulfilled wish to have sex with their mothers. This practice is called "dreamwork". The most famous published study of psychoanalysis is Brett Easton Ellis's seminal work American Psycho, which analyzes the inner workings of USA President George W. Bush.

On the European front, Jacques Lacan has conducted much research and stunningly concludes in his work, "Subversion of the subject and dialectic of desire" that,

"The promotion of consciousness as being essential to the subject in the historical after-effects of the Cartesian cogito [being] for me the deceptive accentuation of the transparency of the I in action at the expense of the opacity of the signifier that undermines the I; and the sliding movement (glissement) by which the Bewusstsein [Consciousness] serves to cover up the confusion of the Selbst [Self] eventually reveals, with all Hegel's own rigour, the reason for his error in the Phenomenology of Mind."

This amazing discovery was so shockingly presented that even today people are still trying to figure out what it means, with little to no success.

Did You Know? Psychoanalysis inspired some of the first video games. A text adventure written in Brainfuck, ELIZORK was the world's first computer game, chatbot, and Freudian psychologist rolled into one!

Recent research (well, in the hundred or so years before the invention of the electric shaver)is highlighting the importance of smell in psychoanalysis. Apparently human beings can react emotionally to smells that evoke a memory of some distant, but emotionally charged event. This discovery has enabled a new school of "Olfactory Object Relations" (or OOR) to emerge which has established a highly credible nosological tradition. Olfactory Psychotherapists will have at their disposal a wide range of perfumes, both beautiful and disgusting, in order to trigger olfactory "nasally free" associations. The more entrepreneurial of this sub-genre have even bottled their own body smell to sell to their patients. In the event of an emotional crisis away from the consulting room the patient gets out the spray and gets a quick dose of their analyst. Splash-on "Eau de Vienna" is a well known brand, a generic blend of analyst odours from the consulting rooms of Vienna.

As you will read below this has implications for analysts who pass on (or die, to be more specific), to be survived by their smell. A black market is known to exist for the rare and prized smells of Freud and Jung. Whether these smells have been extracted "in vivo" or posthumously is a closely kept secret known only to the Ordre Noir de Winnicott de Brest.

Olfactory Psychoanalysts have taken the concept of projection to new heights. Nasal projections are worked with to good effect. Usually the analyst has to clean up afterwards, and have a ready supply of Kleenex at hand. The famous painting by Edvard Munch is a vivid depiction of this. People queue daily to view "The Sneeze" on the walls of the Rijksmuseum, in Amsterdam.

The smell of Christmas is, of course, one that may evoke a wide range of psychological effects. The smell of fresh pine, of roast turkey, of smouldering candles and model trains without batteries are obvious triggers for the perennial disappointment that your parents didn’t know you well enough to give you want you wanted.

For those without comedic tastes, the "questionable parody" of this website called Wikipedia have an article about Psychoanalysis.

Of course, thanks to Winnicott, we know that this is, in fact, “good enough parenting”. The psychotherapist, as the substitute parent must fail in order to be successful. Thus the smells of Christmas, introduced into the consulting room, may be a stimulus to the client’s eventual disappointment in the therapist - who therefore won't be getting any presents.

The most powerful tool in the psychoanalyst's arsenal, the couch prevents a patient from feeling judged or exposed.

A psycho, irrelevant of the manner of mental illness, length of condition or magnitude of danger to the general public can be cured by repeating "the question" in a matter of different ways, including;

• But, how does that make you feel?

Note the different emphasis in each usage of this oh so pure a question. Depending on the skill of the psychiatrist, he could phrase this question up to 18 thousand different ways. Our lord and saviour of psychoanalysis; Dr Sigmund Freud was a master of “the question” as it became known. Dr Sigmund Freud could utter this sentence in 23,000 different ways, clearly an example to us all.

Another technique is not actually saying anything, for this the psychoanalyst will earn most money. The longer the silence the higher the income. Deaf and dumb psychoanalysts earn a fortune and have documented high rates of success. Any protests by the patient may be greeted by a subtle grunt ($150), followed by 15 minutes of silence ($340 - or a special rate of $450 for a Grunt Plus Silence - or GPS).

The greatest psychoanalytic skill is being asleep whilst keeping eyes open, and uttering grunts at randomly decided points in a 50 minute session.

A very famous pupil of Freud earned a fortune, even though he had been dead in his chair for two months.

You've only failed when your patient resorts to this.

Now that psychos can become happy by taking a Prozac pill, many people question whether there is much future in psychos talking about how they want to have sex with their mothers in order to understand them. Psychoanalysts counter this claim with the scientific fact that,

"The 'true' significance of symbols in dreams is in this structural sense actually governed by a fundamental indeterminacy, as long as the equation which realizes -t2 with t2 is not realized by the consciousness. In this context meaning is smeared out. But the unconscious moves in, in a sense with exactly that equation to collapse the indeterminacy of meaning into classical signifiers by repressing freedom. This is an equation that gives a certain pre-determined but groundless value to "i2 = -1", a psychological value that has nothing to do with the value of i but which passes undetected by the Bewusstseing and the ego, perhaps because i is imaginary."

Seeing as no one is smart enough to figure out what that means in order to counteract it, it appears that psychoanalysts will remain with us for some time yet.

"Remaining with us" is the critical element - for it is the Psychoanalyst within which holds the key. We are our own couch, we peel our own potatoes and when the chips are down we move from the frying pan into the fire. If we can't stand the heat we should get out of the kitchen of our earthly desires into the rarefied atmospherics of esotericism. But the psychoanalysts will say that this is just a sublimation of the desire for a good fry-up on a saturday night, six pen'orth of chips and a bag o'scraps.

Well that just about throws in the towel of free association, the napkin of desire and the curtain rail of eroticism.