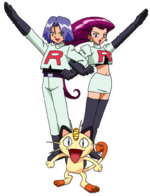 Team Rocket (Japanese: Roketto-dan) is a Sex Entertainment/terrorist/Pizzeria group that was started by Giovanni Forelli after he visited "James' house of Poké-rodic". His initial plan was to name the organization "Team Wang" but their plans were foiled by the Japanese Patent Office who had already sold the rights to that name to Lance Bass, who plans to start a Gay/Lesbo Super Hero Team of the same name. Team Rocket may very well be a part of Brock's Burlap Flap, along with the evil Lunch Lady's Society and every other evil Pokemon-stealing team ever thought up by Nintendo. It has been proven time and time again throughout the games that they are in fact, Neo-Nazis. This is evidenced by their constant shouting of; "HAIL GIOVANNI!"

Team Rocket was first a small underground tradeshow where thugs would steal Pokemon and sell them to 12-year-old pimps in Thailand who would then sell them for sex. However, the income was small due to only several workers at the time, Jessie, James, Bitch, Cassidy, and supposedly Jeremy Mark Karr, so he claims, and also because they all sucked so bad at their job, they rarely got a single Pokemon. Giovanni, desperate to save his company from bankruptcy, he used the company's last remaining 50 cents to advertise on Pokeballs. Fortunately, about Half on the fictional country they live in joined, and the company became a huge dump. Bill Gates is forever alone.

The two main members of Team Rocket are Jessie and James, but there are many more in the service. Jessie and James are quite possibly the two smartest people in human history. Not only have they taught a cat to walk, talk, and do other human things, but they have also built giant robots and other cool Japanese stuff with no money whatsoever, learned the secret to immortality, which is shown by them surviving many catastrophic incidents, and they have learned to fly. They also have a Meowth, a rare and naughty Pokémon who belongs to Team Rocket. He is the brains behind Jesse and James, as he comes up with their evil plans and gets them to agree through the use of sexual favours. 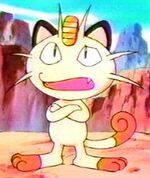 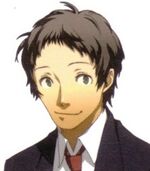 Team Rocket has earned many loyal followers, including this swell fellow.

A trio of Team Rocket field agents, Jessie, James, and a talking Meowth, were defeated on an assignment to steal Pokémon from Viridian City's Pokémon Center by rookie Trainer Ash Ketchum and his Pikachu, and since then have followed him everywhere on his journey in order to steal the Pikachu that humiliated them. After following him through Kanto and Johto, coming in contact with many other Team Rocket members along the way and being shown as incompetent compared to said members, the trio followed Ash to the Hoenn region under directions from Giovanni to establish a branch of Team Rocket there (though this was really only a ploy to get them out of his hair). When Ash returned from Hoenn after competing in its regional League Conference, the trio returned to Kanto as well, empty-handed. After following him through Kanto once again, Giovanni assigned the trio to the Sinnoh region, again with the directive to establish a Team Rocket branch there.

Giovanni claims to not even recognize the three agents, and has rejected the only Pokémon they ever presented to him: a Togepi and a Yanma. Meowth often fantasizes about pleasing Giovanni with Pokémon captured using one of the trio's many harebrained schemes and mechas, at which point he would then replace Giovanni's Persian as "top cat", however this is hindered by both the fact that Ash and his friends defeat the trio each time, as well as Giovanni's low opinion of the three, who have managed to eat up much of Team Rocket's funding with their failures.

While Giovanni views the trio as "bumbling idiots who can't do anything right", they have occasionally shown that they can do things right, if only by working on the side of Ash and his friends. It should be noted that when other Team Rocket members have come into contact with Ash or any of his friends they've been often just as easily foiled as these three.

There are some other wannabe members of Team Rocket. This dynamic duo has the same boss, Giovanni, but they also have their own sub-boss, Dr. Nanba Fiorello Daddio "The Science Gangster" McFucko also known as Dr Ching Chong. Cassidy, also known as Cassidy Yamato Masako Megan Andi Hilary Katsuki Hollingshead Whaley Thomas, is the female half of the duo. She has blonde hair and claims that she was Jessie's lesbian lover back during their years in that Indiana high school. Jessie, however, has gone through great measures to set the record straight, having sex with James to prove she's hetero and claiming that Cassidy was a typical anime dyke that stalks the unfortunate target of their lust vehemently, making most of Jesse's high school life a living nightmare. She went on to great detail of how, when asked out by any guy in the school, Cassidy would pounce on them, tear their throat out and take a piss or cum on them, and she made a habit of tracking down any and all of Jesse's male and female friends, acquaintances, and people in school she had made eye contact with, and sending her friends from numerous gay S&M bars around town rape and murder them, making sure the rapist(s) of each victim was of the same gender as the victim. Jesse eventually fled the country and settled in Japan, where she was able to find some amount of relief. However, in an act of sheer, unmitigated 'fuckluck', Cassidy had managed to get across the ocean by using a nearby chump (Butch) as a human raft, being way too cheap to pay air fares, and, using the hapless, half-dead dope (Butch) as her 'male team partner', was able to get in as a Team Rocket member, and continued to torment Jessie, until James finally got fed up with the whole deal and strangled her to death with the cord of a nearby payphone. This, among many other things, is what eventually led to Jessie and James' SUPAH HAWT marriage. Cassidy loves the anime Dirty Pair (duh), has been well known to stuff cigarette butts into her vagina for fun, and collects thimbles. The other member is Brandon, or was it Lawnmower? Either way, his voice sounds like an old mentally challenged chainsmoking frog. It was true that after season 9, Brandon or Lawnmower was murdered by Jessie and James by being smothered by their well practice "hump" (see above picture).

~ Jeff on people getting his name wrong

He claims he was part of Team Rocket for a time. Everyone, I mean EVERYONE who is part of Team Rocket denies this. Detectives were searching information for a while, but decided to pass it as nothing more than a bunch of crap, like the time he "was there when JonBenet was killed."

“If he WAS, he'd probably (claim to) molest all the stolen Pokemon. Besides, the ones that are sexed-up before selling depreciate the value by 9001%”

~ Vegeta on above quote

Jessie, as she appeared in her whoring years. She kept eating High fructose corn syrup, so it was kind of a given.

The FBI has recently implicated Team Rocket in the deaths of seven billion Indonesian prostitutes.

Currently, James lives in Sacramento were he directs his own poke-porn. He also terrorizes Jews because he's a racist. Said terrible acts are greatly urged on by Jesse, who, after whoring herself out to hefty businessmen in Atlantic City (she herself was kinda hefty, but has lost weight since), got married to James, and they often have TEH HAWT SECKS on and off the set. Meowth was rumored to have been killed through euthanasia in 1994, yet in reality he turned the injection on the vet at the last second, went on a brutal, murderous rampage throughout the clinic, killing both human and Pokemon alike, and returned to his loving peons, Jessie and James. Nowadays, Meowth secretly videotapes filming of James' films and Jessie and James gettin' it on, which averages at about sixteen times a day, and sells them on eBay.

Team Rocket Aeronautics Manufacturing Corporation: A manufacturer known by the name of Team Rocket. Specializes in making rockets & rocket components for space travel, but also produces spacecraft such as satellites, probes, lander modules & rovers. Its most paying customer is NASA. Team Rocket is a racist company, but provides equal opportunities to all as a result of the Civil Rights Movement, the abolition of Jim Crow Laws & unions. The company's headquarters is in Plano, Texas.