“In Soviet Russia, rocket rides YOU!!'”

Lance Bass (born Lanth B. Ath, 1979, Laurel Mississippi) is an American musician, ass-tronaut, homosexual, and former Mr. Universe. He started out his musical career as lead singer for the Spice Girls but was kicked out when they discovered he was neither spicy nor a girl. He went on to form a group called 'NThync where he produced such hits as He's always a Woman to Me and Tico Tico, and appeared nightly as the host of American Idol. 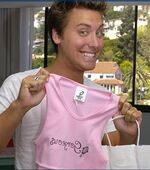 Lance Bass showing off his latest T-Shirt. The design is backwards. Isn't that cute?

Lance Bass was born Lanth B. Ath, but his agent (who also represented Dick van Dyke) recommended that he change his name "to sound less gay." He did, but it didn't help. Still, for years, millions of little girls and creepy old men idolized Bass and hung posters of him in their bedrooms. He was known as the "quiet one" of N Sync, most likely because he was still on the downlow.

Eventually, 'nSync met its demise when their music was found to suck.

Bass left the music industry and took up acting. He starred as Jesus H. Christ in Mel Gibson's The Passion of Jesus H. Christ, and was widely praised for his accurate portrayal. In fact, millions of Christians now believe that Lance Bass is Jesus H. Christ and worship him. He then went to play the role of Sephiroth, where he became jealous of his character, and started to act all snippy, oh yes he did girl!

Bass trained as a cosmonaut so that he could get ass plumbed in zero gravity. He's most known for his starring roles in the low budget skin flicks, "That's not a puddin' cup that's my asshole," and "Please don't touch me there dad, I'm getting a rash."

"Oh god! Why did this have to happen?" said Bruce Biggerstaff, president of the International Gay Congress. "Why couldn't Justin Timberlake have come out instead?" He went on to say "why is it always the stupid funny looking ones who come out?"

Bass is also rumored to have a fetish for Marines in uniform.

Bass and his closest friend Aaron Carter were supposed to come out together, but after a discussion with his laywers and their very tragic break up, Aaron decided to stay out of the public's eye for a little while longer.

Bass took advantage of a drunken Bart Simpson. After Simpson accidentally stumbled into a Gay Bar, there being no more bars in America and most of Canada he was allowed into. He ordered too many drinks and become uncontrollably stoned. Bass then started to talk with Simpson. Before you know it, about midnight, Bart and Bass were making out on the pool table. When they were kicked out, they immediately rented a room and had man-sex. Around two A.M the two were married in one of those chapels that have the tag lines "Wally's Weddings: Were Fucking Junkies Get Married For About an Hour". Two people attended the wedding; Jebus and some bum. No one knows what happened in the following hour; it is known they had man-sex again and were kicked out of the motel because you could hear the bastards from Maine. Around noon, Simpson and Bass woke up in a dumpster naked holding onto eachother. Simpson immediately filed a divorce, and claims he was drunk and thought Bass was Hilary Duff (note; Duff and Simpson had sex once about a week later) Bass went into a deep depression that lasted until his next marriage.

In July 2006, Lance Bass and Ryan Seacrest got married. Mel Gibson performed the ceremony, after making sure there were no Jews around to ruin everything. You can visit his Amazon wishlist and buy the newlyweds a gift, if you're so inclined. Lance is also registered at The Sharper Himage.

Lance Bass became a sad old man, one man asked him about marriage, he replied, I once was married to Nick Nolte but all i ever heard was...Gawwddamn Lance just kill yourself, youir a piece of shit anyways, and you look like your moms cunt.. and gawwddamn Lance your asshole smells like your dads weiner.. so he married john mayer, too gay, then david hasselhoff, not gay enough, until he found spiderman, he was the only one who was balanced perfectly.

In 2007, after having come out as gay, Lance Bass was interviewed by Carson Daily on MTV Total Request Live. Carson asked Lance several questions about his sexuality, including the question "So, what do you do on the weekends, besides produing music?" Lance responded that it involved buckets of EZ Lube, which produced an awkward silence on air. After a few seconds, Lance attempted to fill the silence by sticking his toungue out like Gene Simmons, whiched caused the produced to immediately switch to commerical.