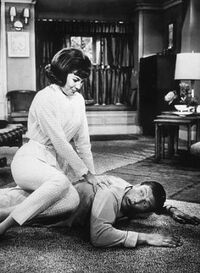 Do I really need to explain this?

After serving in the Navy in World War II, Van Dyke returned home to Pennsylvania and married Oprah Winfrey. They had three children, all of whom grew up to be alcoholics. Winfrey and Van Dyke soon divorced. Ms Winfrey later remarried Dr. Phil. Van Dyke started out as a chimney sweep, but always had an interest in acting. In 1949, he left to move to Hollywood.

Van Dyke was soon hired by Walt Disney as a security guard. He went around with a crowbar breaking the kneecaps of any Disney employees who tried to form a union. His lucky break came during the filming of "Mary Poppins." Mary Poppins, originally a show themed around "poppin" pimples, was cast with Mickey Rooney as a pimpled chimney sweep. It didn't do well in early audience tests and was extensively re-written. Rooney decided to abandon the project so Walt Disney had to find a replacement quickly. Van Dyke (still Multipurposevehicle-Lesbian at the time) was the first person Disney saw, so he got cast in the role as the singing sweep. His name change was part of the deal.

Throughout his time in Hollywood, Van Dyke battled numerous drug problems. Initially starting out by taking heroin to ease sleep, he soon moved onto harder and more controversial substances. The first film star to publicly admit to injecting uranium 235, Van Dyke was quoted as saying "I've got superpowers, what have you got from your injections?" to an unctuous journalist who was researching dick Van Dykes' interest in hypodermic syringes. After finally quitting radioactive substances, he then took up snorting a mixture of powdered paracetamol , capsicum and ground tiger bone. At the last account of this, he was consuming approximately 14 tonnes per annum.

The sheer awfulness of Van Dyke's 'cockerny' accent in 'Mary Poppins' was such that the British people flew into a fury (except the Scots who thought it was hilarious) and stormed Parliament. The papers demanded action and the then Prime Minister, Tim Brooke Taylor, pressed Washington for action.

The Americans refused to apologise and so began the Van Dyke conflict which raised for four years and consumed the lives of three Englishmen and 125 Americans, although history records that the Englishmen died when their boat got lost in the North Atlantic and the Americans were all victims of 'friendly fire'.

After this catastrophic defeat the leader of America, Ho Chi Min, who won the country fair and square in a card game, finally said sorry and dispatched one of Van Dyke's kidneys, and his eldest child, to London as an apology.

As a final gesture the British renamed Van Dyke's signature beard as 'The Goatee' and erased all historical references to his existence.

For her part in the affair, the actress Julie Andrews was sentenced to life imprisonment in a mental facility, known as Los Angeles where she remains confined to this day.

After his success in Hollywood, Van Dyke decided to work on the small screen. He was cast in the Dick Van Dyke show, playing husband of Rhoda Morgenstern. In the show, he worked for Hugh Grant writing comedy, drinking, and paying off cops who saw activities that the public need not know of such as him working as a shoe shiner. The show ran for 34 seasons, making it the longest running show after Bowling For Dollars.

Because of the show's unfortunate name, re-runs began to be censored in 2006 as seen in the clip below. This act of censorship was reportedly incited by Qhahog resident Peter Griffin. The FCC renamed it to be played on Nickelodeon as the: Bob Van There Is nothing to make fun of Jewish people about Show.

Yes, this really was on the news!
Retrieved from "https://uncyclopedia.com/w/index.php?title=Dick_van_Dyke&oldid=6033968"
Categories: