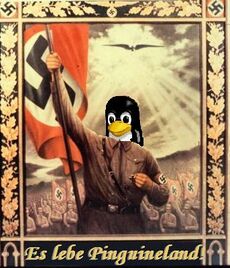 For those without comedic tastes, the so-called experts at Wikipedia have an article about Happy Feet.

“The main plank in the Happy Feet program is to abolish the liberalistic concept of the individual and the Marxist concept of humanity and to substitute for them the folk community, rooted in the soil and bound together by the bond of its common blood.”

Happy Feet. You will be assimilated. You will dance in step with The Machine. Here, you are not a penguin, you are an arm of the State; cast aside your individualist ideology. You exist only to dance, and dance for the State.

The Story of Mumble 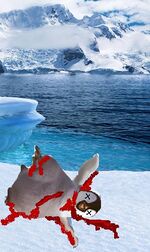 The fate of anyone who dares cross the State.

Mumble was a threat to the State. His noxious tap "dancing" bore a clear and dangerous message to the nation: "Look at me, I am not a tool of the Machine!" Mumble was born as what we call a "turd-baby", a whiny piece of shit with no usable aptitudes. He could not sing, he could not keep a beat. He was a parasite, leeching off the sweet unity of the State like some shit-filled barnacle.

Nevertheless, his parents found a use for him, scrubbing the excrement off the shelves of ice around the bay. But even this gracious act of mercy, Mumble could not accept. Always pushing and pushing, trying to "be himself". In a functioning colony, you do not exist as an individual, you exist as an arm of the government, and if you do not perform, you will be amputated. So it came as no surprise when Mumble was trying to scrub a particularly stubborn fecal stain of one of the glacial walls, that a leopard seal, no doubt trained by the State to find and eliminate troublesome parasites like Mumble, attacked and chased him, all the way to a nearby colony of Adelie penguins. Rather than redeem himself in the eyes of his brethren and eliminate this inferior race of penguin, Mumble united with them, and showed them his blasphemous way of the dance, no doubt preparing the Adelies for an invasion against the Emperor colony.

When Mumble is finally assimilated into their group, the insolent little shit actually decides to go back to the Emperor colony. Even worse, he comes at a time when a great fish famine grips the land. When the elders try to explain that the cause of the famine is Mumble, who has angered the gods with his dancing, Mumble tries to insist that they are wrong! The story could have ended right there if the other penguins had decided to destroy Mumble and crucify him over the icy ridge for all to see, but no. They let him go, and what did he do? Go out looking for answers, without so much as a State-mandated request!

Mumble then discovers the cause of the famine is the humans, overfishing the lands and polluting the seas. Rather than tell the colony, he puts the punishment in his own hands. What happens now, you ask? He gets sent to a marine exhibit in God-knows-where, and goes literally Bat Fuck Insane, finally killing himself with an icicle through the chest. 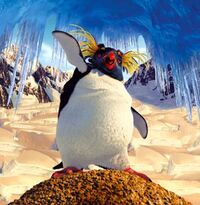 “It is thus necessary that the individual should come to realize that his own ego is of no importance in comparison with the existence of his nation: that the position of the individual ego is conditioned solely by the interests of the nation as a whole...”

To truly understand the immaculate philosophy of the Happy Feet regime, one must come to understand that his ego means nothing. We live for nothing if not to serve the will of the State, and if that will is to dance and sing en masse to upbeat, environmentally-minded Disney music, then so be it! Ein Pinguine, ein Musik, ein Führer! 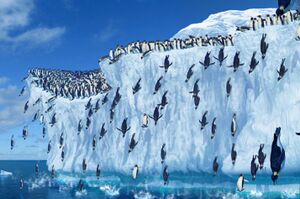 "We will take to the seas, and to the land, and the skies, and we will reclaim our home...Es ist Zeit für Rache!"

This is our land, a land of pride; we are the Master Race! How could we stand back and watch the humans destroy our native soil?! I say to you penguins, let us join together under one arm of the State and vanquish these insolent humans who entreat on our land! Ein Pinguine, ein Reich, ein Führer!

We will take to the seas, and to the land, and the skies (well, not the skies, 'cause we can't fly), and we will reclaim our home. For every broken bottle, for every plastic soda can ring, for every bag of Doritos Brand Cooler Ranch chips, I want you to kill one human and avenge the land of your forefathers! Es ist Zeit für Rache!