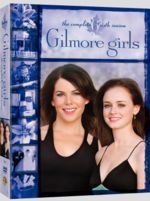 The Gilmore Girls, who will never sleep with you.

Gilmore Girls was a popular TV series which followed the lives of Lorelai Gilmore and her teenage daughter Rory plus the "wacky-in-desperate-need-of-therapy" residents that populate the town of "Stars Hollow". It also gave birth to the term "Subtitler it!" for the masses who couldn't catch up with what they were saying. It was then realised the show was airing each week at twice the recorded speed, and was subsequently slowed down. The show was soon cancelled (after 7 years, 7 seasons, and almost 200 episodes).

This series has touched a nerve with the caffeine addicted crowd (they can relate), as it features characters that talk at insanely fast speeds, which cannot be heard by the average human being (unless you're of a related species to them). Their record vocal speed was so high that it had to be put into MPH, but is still too huge of a number to be typed here. This was recorded and slowed down x4,500 in order for the show to broadcast on TV, which turned out to still be too fast. But if your even partly worth your salt, you can understand it. It's "smart humor", wit.

Many Doctors and Scientists have speculated that the show's producers subjected the cast to pure doses of "Columbian Strength" coffee. Nevertheless, the show drew wide acclaim from a variety of groups. From young smart teenage girls with ambition (See Satan's way of distracting you from housework) to middle age men spending extensive periods of time in "Correctional Facilities". After seven years, the series ended in 2007 so that the actress (Alexis Bledel) could stop having to play a character that was almost voted "most perfect girl known to mankind" in her high school yearbook. It's a lot of pressure.

Lorelai Gilmore: Lorelai is a hard working, quick witted, young hot single mother of 16 year old (following her to the age of 22), Rory Gilmore (Lorelai had her at 16). Did we mention she's hot?. When she isn't working behind the desk of the bed & breakfast she owns ('looking hot), she's at the local cafe having a cup of coffee with her daughter Rory ("looking hot"). She also spends every Friday night visiting her uptight mom Emily & her dad Richard talking about the week that she has had ("looking hot"). Did we mention Lorelai's hot?

Lorelai was good friends with the nutty Sookie St. James, who met a tragic end at the end of season 4 when she died of a fatal concussion after falling from a sink that she was taking a poop in.

Rory Gilmore: Rory is a young an equally hot girl that happens to be Lorelai daughter. Intelligent, capable and "hot", she spends her days as a student at Chilton Academy in her "hot" schoolgirl uniform reading in toxic amounts, listening to 80's era music possibly forced on her by her mother, chilling with her 'Gramps', eating amazing amounts of questionable food, and angsting over the amount of hot, intelligent, bookish, funny, witty, and hot guys that can't help but fall in love with her. Charming, friendly, smart, witty, thoughtful, and "hot", Rory is a caring and sensitive young girl who wants to leave her mark on the world (she idolizes Christiane Amnapour).... Did we also mention, that she too is "hot"?!?!?!

Luke Danes: The town drug-dealer and crack-fiend. As Luke operates out of his diner, it is often the town-hub for all activities, and is guaranteed to be jam-packed with customers craving for a fix on a Saturday morning at 6am. He uses his father's old Hardware store as a front for his drug running.

Luke also does not allow cell-phones in his diner, in case it is an undercover Narc recording any conversations he may be having with a customer or supplier. Luke is most recognisable for his snarly, crack-fiend demeanor, his disregard for shaving or washing in general, and his permanently-affixed backwards cap to cover up his long, greasy hair.

luke is very good friends with Hank Hill, due to them both being drug barons

Christopher Hayden, Rory's father, played by Ben Stiller, first appears in season one He has never visited the girls in Stars Hollow, but surprises them. Things go fine until Lorelai's mother, Emily, finds out that Christopher is gay and decides to throw a dinner party with Christopher's parents.

Chris has a transexual boyfriend, Sherry (Jennifer Aniston), and adopted a small Malaysian boy. Lorelai and Rory are mad at Christopher and estrange themselves from him. Rory is present for the adoption of his son "Gigi".

In the Season Six finale, Christopher and Lorelai begin dating. One night on his way home, Chris gets into a fist fight with Luke, (because luke sold him bad crack which resulted in him having a very bad trip) from which neither one emerges the victor. In the end, Lorelai realises that she has never stopped loving Luke and cannot remain married to Christopher. Christopher makes a final appearance at Rory's college graduation, where he and Lorelai appear to be on good terms.

Dean Winchester: Dean is Rory's first boyfriend, and moves to the town at the beginning of the 1st season. He works in the grocery store as a bagboy, as well as some small drug-running over the border for Luke. All is well after he is settled, and many of the members grow attached to him.

However, it is revealed that he is really Sam Winchester, a demon hunter, investigating to town for what appeared to be death's by an evil spirit causing people to collapse and vomit out their insides, which in reality was not a vengeful ghost, but a side-effect of a bad batch of Luke's Ectasy that he had given out. Sam's brother Dean Winchester, who's identity Sam had been impersonating in order to get laid, found out what was going on and immediately gave him a bitch-slap and ordered him to stop.

Sam then broke off the relationship by saying that he Loved her, even though they had only been going out for 3 months, and then when she realistically said she did not feel the same way, he pretended to get really pissed off at her, allowing him an excuse to break up with her. To next break his ties with the town, he resigned from his job as Luke's drug runner. However, Luke did not take this resignation well, nor did he enjoy hearing that he had cruelly dumped Rory, who's mother he was trying to get laid with. He then gave Sam one of the most savage beatdowns in the history of TV and Cinema. Seriously... it was like that scene in The Godfather where Sonny beats the shit out of his sister's husband in the middle of the street with a trash can lid, combined with the way Christian Bale verbally destroyed that light technician...yeah, it was awesome! Chuck Norris would have been proud.

Gilmore Girls is one of the best shows with the perfect mixture of comedy, drama, witty dialogue and attractive, awesome characters.

Wish Amy Sherman Palladino stayed for all 7 seasons instead of the shit Daniel Rosenthal that ruined season 6 & 7.

NOTE: This is only to be attempted at your own risk:

Get out from under the rock your hiding under. Watch movies, read books, newspapers, and tabloids. Drink coffee and eat Pop Tarts. Drink coffee.

*NOTE: The writer of the above 'NOTE' was TOO stupid to comprehend the difference between 'to' and 'too'. That's right, insults with grammar.

The Effect of The Gilmore Girls[edit]

As stated earlier, the series has had a bewitching effect on viewers (particularly ones who were caffeinated).