Those know-it-alls over at Wikipedia also have an article about: Life on Mars.

...Although, frankly I've read funnier things on a packet of crisps.

Life on Mars is a BBC television series, based on the life of astronaut David Bowie. 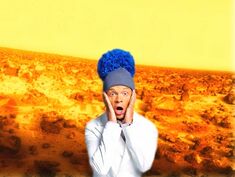 Life on Mars tells the story of an Italian police officer, Timmy Tyler (played by Graham Norton), who is hit by a car and dies, only to wake up to find himself on an alien planet, where society is based entirely on old Earth 70's sitcoms.

In spite of the title, no actual David Bowie songs are used in the series, primarily due to high licence fees. Instead, most songs are performed by the Bowie parody band, The Stardusters, who are really quite dreadful.

Life on Mars, series 2, episode 7. Tyler gets a job at Grot.

Most of the ongoing plot threads were tied up in the final episode (although many of them were simply too silly and therefore completely ignored.) The central mystery, however, was intentionally left ambiguous, and thus it is left up to viewers to decide for themselves the answer to the biggest question: were the writers actually on drugs or simply insane?

The BBC has announced that there will be a number of spin-off series. So far, only Ashes to Ashes has received official confirmation.

Ashes to Ashes will be set in Wakefield Crematorium, it will follow the hilarious antics of its staff who do all sorts of amusing things like putting the manager in the oven because he didn't want to give them a pay rise.

The Panorama team goes undercover to expose the shocking lack of hygiene control in chocolate factories. This is referred to as their "Hygiene Hunt" (or 'Gene Hunt' for short.)

"My name is Veronica Mars. I had an accident and woke up in a different time slot. Have I been pre-empted, cancelled, or put on hiatus? Whatever's happened, it's like I'm on a different network. Now maybe if I can work out the reason, I can get renewed for another season."

Marswood will follow the exploits of an ultra secret organization who will use all the technology of 1970s Britain to fight against the threat of balaclava-wearing bank robbers with sawn-off shotguns, skinny football hooligans in tight denim jeans and jackets and alien creatures who travel back to the 70s via a rift in space and time. Probably

Anne Robinson presents a special Watchdog investigation, revealing that the little robots weren't telling the truth when they said Smash was better than real potatoes.

"My name is Julius Caesar. I had an accident and woke up in 44BC. Am I insane, comatose, or back in time? Whatever's happened, it's like I'm in a different country. Now maybe if I can work out the reason, I can get home before Brutus stabs me."

Celebrities balance citrus fruits on their heads for charity. Despite the title, there are no actual stars, just the usual Z-list crowd.

"My name is Gene Hunt. I had an accident and woke up 1st July, 2009. Then I went into a bar and tried to light a fag, but some moaning Dorothy told me I wasn't allowed to do that any more. So I punched him in the face and kicked seven shades of shit out of the bastard."

"My name is Britney Spears. I used to be a pretty singer who had a reputation for cleanliness and virginity. I had an accident and woke up in 2009. Now maybe if I can work out the reason, I won't be Courtney Love."

"Hello my name is Bob the Builder. I had an accident and woke up in Marilyn Manson. Am I insane, drug-fucked, or homosexual. Whatever's happened, it's like I'm in a different rating. Now maybe if I can work out the reason, he'll stop gyrating."

Tyler returns to the hospital ward after having an accident and waking up with MRSA.

The only spin-off so far actually made, which, oddly enough, is actually set on Saturn.

Some observant viewers have noticed several minor anachronisms in episodes of Life on Mars.

These viewers clearly have far too much time on their hands.

“In Soviet Russia, Mars watches life on YOU!!”

~ Russian reversal on Life on Mars

“On this site, this repetitive Soviet Russia 'joke' is starting to annoy YOU!!”

~ Casual observer on whoever is over-using that sodding joke

“The only thing worse than being knocked down by a car, then waking to find yourself trapped, defenceless and alone on a Martian world based on old 1970's sitcoms is... no, that would be terrible, wouldn't it?”

~ Oscar Wilde on Life on Mars

“As soon as I find my agent I'm going to kick in his head.”

~ Philip Glenister on Life on Mars