“Well fark you too!”

For those without comedic tastes, the so-called experts at Wikipedia have an article about The Fărk.

Fark is a website created by Drew Curtis, Duke University '94, formerly known for his status as the ectopic fetus who nestled snugly in the fallopian tubes of screen legend Tony Curtis. The senior Curtis, known for disappearing into his roles (e.g. Some Like It Hot, where he portrayed Marilyn Monroe) is shown here, late in the third trimester as he was preparing for a role in the b-roll of a Chip 'n' Dale Behind the Music.

Drew Curtis slowly developed until he was beset upon by a deep case of pubescence and started growing hair follicles where before there were none. Fascinated, as well as criminally neglected by his father and allowed to traipse nude about the internet, Curtis built, from simple household materials, Fark, a small website that examined, documented and occasionally editorialized on the meaning of his new fur.

Several years passed and Curtis, now beset by early middle age and the thinning of much of his hair, was forced to find a new topic. His early success and the subsequent cults that formed around potato chips bearing his likeness massaged his ego until he determined that his work was a formality, one that should be taken care of by the consumers themselves and leaving him to preform ritualistic acts of self-abuse in the shower until the hot water runs out. This supposedly transformed the site into one where people who think they are funny can post stories about their battles with the pope. This quickly developed into a cult group opposed to the Pope, Oprah and Canada. The pope and Oprah did not find this funny and have sent their minions - former documentary film makers from Canada, whose projects include "The Kids In The Hall" - to track down Farkers.

The reasons behind Fark's hate for both the Pope and Oprah have only recently come to light. After Drew had a drunken accident with toasters, water, sperm, 43 kittens, Oprah and a beta version of the Pope, Drew was kicked out from the only place he knew (Microsoft).

Fark's World Headquarters are in Kentucky where thousands visit everyday. At their HQ they hold their servers for the knowledge for profit site Wikipedia.

The hunt has been going on for several years and has resulted in the death of Star Trek alumnus Wil Weaton. A statue has been raised in Pennsyltucky in his honour. 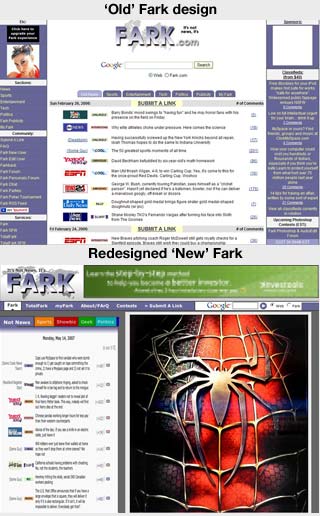 After running out of beer at one of the infamous Fark recruitment parties, Drew vowed to never again have an empty beer mug. He has since taken on the publishing world with a new book, BEER: how beer is better than mainstream media which has since outsold the Bavarian translation of the Harry Potter series and has been nominated for a Pulitzer for most gratuitous use of the word 'beer'. However, his top-selling novel has still not generated enough revenue for his needs. He has since revised the website to better accommodate new advertisers, who have promised him full access to a brewery after hours with all the milk jugs he can carry. In exchange, Drew has improved the site's ad readability by minimizing the content.

The new look for Fark has drawn many positive reviews from regular visitors, who have gladly sent their empty milk jugs and bungee cords to Drew to assist him with his nightly visits to the brewery. Advertisers have also enjoyed the new layout, contributing to editorial content by placing the sexual innuendo in their ads rather than depending on the random postings of visitors.

Moderators on the site have also introduced a new feature that makes posting much more exciting, by randomly deleting comments without rhyme or reason, even ones posted by Drew himself. This has led to much more interesting flamewars as people attempt to respond to comments that no longer exist.

Overall, the shift of emphasis from content to commercial has led to copycat sites such as bannination.com who try to capitalize on Drew's success at getting free beer, but have yet to reach the same commercial success by merely having links to weird news and commentary about said news, and have yet to achieve the same advertising emphasis and editorial control enjoyed by Fark.com's visitors.

This isn't photoshopped. UFIA stands for "Unsolicited Finger In Anus"

Strangely, the Fark cult have adapted the Four Neon Virtues laid out by the pope (whom they oppose) as the cornerstone of their belief system. Drew says the reason for this will come in time.

The mods of Fark also believe that any opinion that differs from theirs should result in instant bannination as they circle-jerk to pictures of Drew Curtis.

Upon acceptance into the group all new members are required to eat, in one session, a twelve-pound ham prepared by one of fark's 45 Iron Chefs.

The Farkers have a deep seated hate for a rival internet site, Something Awful. They often engage in battles of nerd supremacy, such as sleep deprivation, pimple popping, circle-jerking, larping, and riding the snake.

The Farkers have a deep seated hate for comedy and will drive anything mildly humourous into the ground through over-reference and poor photoshop skills. Ham or Bacon are forbidden fruit of the Jews. Shitshape.

Farkers have a deep-seated detest for anyone who speaks the truth, provides reasonable arguments, questions unfair practices by the moderators and admins that you will be branded with the scarlet letter of a shadowban that nobody else can see. For others who are into fucking cows, collecting videos of shemales, wishing you were the kid on the front of Captain Crunch Cereal Boxes and especially Drew Worshipers, a shadowban is considered the equivalent of online suicide. 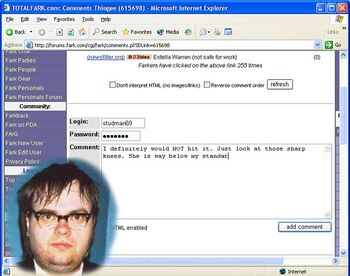 'The guy in the corner is a major tubalub'