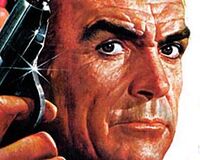 “I have pierced Mr. Brosnan and gone spelunking in Daniel's crag, and I am at last prepared for the big leagues.”

James Bond: stealer of hearts, whacker of villains, Scottish in accent and arrogant in demeanor. But how does he maintain his remarkable attraction despite franchise setbacks and blond hair? A Bond girl is a woman from a James Bond film who serves as a love interest for the suave protagonist. They are always beautiful, and while they are unprincipled in general, they will reverse this lack of morals in order to save Bond when he's in a tight spot, regardless of their previous affiliation with the enemy.

The Bondness of a girl is ingrained at birth, but the condition can only be positively identified, and then only at puberty. In overt cases, the Bond girl will become dazed and remote, losing interest in normal activities. He or she will stand on a balcony if there is one, staring into space and muttering something about a lover. The condition can be frightening to family members not properly educated about it. While it is not life threatening, it does affect quality of life significantly. If and when James Bond does arrive, experiential time for the Bond girl will exceed twenty years while only ten minutes will pass for Bond. Once the encounter is over, the Bond girl will return to her stupor, never to take any interest in anything again. The severity of the condition is well known to the Spanish, whose tradition of reserving a day of mourning for their as-yet-unclaimed Bond girls dates back to centuries before Ian Fleming penned his first novel.

As evidenced in From Russia with Love, a Bond girl can maintain some of the qualities of a normal person by maintaining regular correspondence with James Bond. Regular letter writing can alleviate the pain associated with the condition, with the level of relief being proportional to the lavishness of the writing and the imagined probability that Sean Connery will return to her arms. This technique only works in the Bond authors' most tame novels though; the Bond effect has since been transmogrified to ensure the swift, tragic death of any woman who manages to overpower her Bondness to leave the movie set before filming is complete. The difficulty in relieving the condition is typically attributed to its resemblance to a literary device, though this doppleganging is superficial as reality is not literature.

The Bond field is a force field permeating all time and space according to the inverse quartic law function. As the field drops off very fast, it is virtually undetectable at distances reasonably far from James Bond or an actor who plays him. Adding to the challenge is the fact that, like all fields in physics, it can only be detected with a test object that is affected by it, in this case a Bond girl. Physicists at CERN tried to strap Bond girls into a supercollider in order to empirically measure the Bond field, but naturally this rendered the girls damsels in distress. When James Bond was through with the place not a single experimental physicist was left alive, leading to the dearth of progress we have in the field today. The Bond field puzzles theoretical physicists such as Stephen Hawking because its equations are of a far higher order of complexity than, say, the Unified Field Theory.

A Bond girl typically does not make the decision to be with James Bond rationally, but rather out of a primitive urge. This motivation forms part of the base of Maslow's hierarchy of needs, but the hierarchy typically excludes it as it is peculiar to Bond girls. Specifically, the Bond field supplies a mental pathos in the Bond girl accompanied by some physical attraction of the gravitational sort. The Bond girl takes on a zeal for saving James Bond from crisis situations such as exploding poker chips and Chinese snipers. The sense of gratification for this is weak, of course, and fades over time, especially as James Bond leaves the poor Bond girl, which he, with few exceptions, always does.

For those without comedic tastes, the self-proclaimed experts at Wikipedia think they have an article about Bond girl.

Goldpenny Moneydollar
She is Bond's secretary and lover on location, one of the few Bond girls to have the honour of her capitulation to the Bond field being satisfied on a regular basis. The Bond field affliction prevents her from leaving Bond even though he is constantly with other Bond girls and disloyal to her.
Kitty-Titty
A femme fatale with a dangerous penchant for cocktail weenies, Kitty outraged audiences for her prominent placement as a villain's henchwoman in Never Dream of Tomorrow Dying Another Day. Melting at the sight of the then-Bond Michael Harris's gently spinning nipples, she ultimately chose to push the giant red button labeled "Blow-em-up-a the lair," sacrificing herself for no reason other than to comply with the Bond effect.
Helga Russianbone
As her name implies (Bond films are normally constructed from far deeper stylistic elements), she is a Russian, but what the audience doesn't know until she intimates it to the fourth wall is that she is a spy for the KGB. Through a plot twist, a helicopter, and some sort of utterly unfeasible orbiting laser satellite, she enters Bond's arms. She is foresaken to the depths by the screenplay upon revealing the code to the aircraft-carrier submarine.
Margaret Hotass
In the box-office hit "007- Live and Let Goldfinger Die Another Day From The Spy Who Loved Me With Love" James Bond (Played by Larry Linville) goes to a Korean� Mobile Army Surgical Hospital unit disguised as a surgeon named Frank and meets the lovely Margarat Hotass (played by Loretta Swit). He proposed to her, but then everything blew up, forcing them to get a new Bond.
Pussy Vaginacuntboobsnipplessex
A recurrnig extra who ironically is not attractive and never engages in sexual activity or card games with Mr. Bond. She can typically be found in the background of car/boat/MIG/wombat chase scenes, glaring angirly out a window.

How to tell if you're a Bond girl[edit]

You may be a Bond girl if:

A caveat: the above points are merely heuristics. Anyone could potentially be a Bond girl, without respect to age, gender, reality of person, sexual habits, loyalties, or geographic location. There is no completely reliable test to screen out Bondness. You will just have to live with the fact that you too could be a Bond girl.