“There's only one thing worse than being talked about. That's watching this junk.” 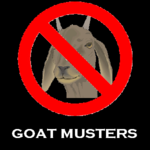 Goat Musters is a 1984 comedy/science fiction/sheep film that stars Bill Murray, Dan Aykroyd, Harold Ramis and Rick Moranis. It grossed just under US$100,000,000 (US$9,99 to be exact) making the most successful goat movie of the decade and #2 Best Sheep Orientated Movie of All Time (Silence of The Lambs was #1).

It is said that the idea of Goat Musters came from a close personal experience of Harold Ramis. Ramis, it is rumoured, was taking a vacation with his imaginary girlfriend and went out walking near a farm specializing in goat cheese. (Some believe this was just a cheesey joke that Ramis got off the internet.) He went to see what a goat looks like up close (for, after all, he is notoriously boring). A period of extreme violence/licking followed that Ramis still has nightmares about. He managed to escape with a fraction of his original I.Q. (23% of it, actually) and serious injuries to his eyesight, face, and self-esteem.

While recuperating in his cottage, he had strange and boring visions of a goat-dominated world. When he awoke, his underpants had mysteriously changed color from white to brown, his sheets were soaking wet and his humorous writing style had completely vanished. Half concussed, he grabbed a ballpoint pen and scribbled some completely unrelated prose on a roll of toilet paper.

His return to New York, he told a very uninterested Dan Aykroyd about his new ideas for a comic blockbuster masterpiece (cough). Aykroyd, in attempt to shut Ramis up, agreed to develop this idea into a script.

After minutes of laborious work, the final script was finished. 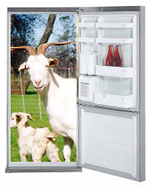 The goat in Dana Baa-it's fridge.

3 eccentric scientists are thrown out of their university after their findings and studies are found to be non-existant. Heart broken, they decide to open business as the 'Goat Musters'. Their work would be to track down and trap all dangerous goats in New York city and keep them out of the public's way.

When they first blast a goat to pieces with nuclear 'Proton Packs' (they then proceed to place the tiny bits in a box) their popularity grows and soon are needed all over New York to do away with extremely dangerous goats.

Meanwhile, an attractive woman, Dana Baa-it, is returning to her spooked flat (Shh...it's a secret) with her heavy shopping. When her eggs leap out of her bag and cook on her kitchen bench, she starts to suspect that there's a goat around, and it's hungry for eggs...or her bench is a scientific breakthrough. She then proceeds to open her fridgerator, close it, and then open it again (her re-fridgerator), finding that it is inhabited by a huge evil goat. After calling the Goat Musters, the goat vanished forever. (Or until later in the film, when it comes and takes over Dana's body and becomes a minion of the big baddie, which the Goat Muster's will defeat in a spectacular finale. But Shh...that's a secret too.)

At this point, most people turn off their TVs/fall asleep/die of boredom so that point is considered to be the end of the film, even though it's only 43.721% done.

Goat Musters, despite its bad reviews, was a complete failure in all countries, except New Zealand. Coincidentally, in New Zealand, every person (and sheep) bought (well, stole) a ticket to see this film. However, in interviews with the viewers, 63% of them said something along the lines of "Dimn it, the dimn muvie dudn't hive uny sux un ut, eh." The remaining 37% were cremated the day after. 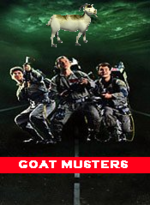 The Original poster for Goat Musters.

Many comedy nerds blame the marketing for the film's flop. The taglines were a main marketing low. They included many puns and went like this:

Despite being named a man made disaster, Goat Musters has been referred to by many other texts: 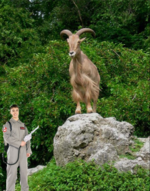 The Goat Musters Work Experience Boy is considered to be a highlight of the film. Whilst mainly making tea throughout the film, he confronts a goat near the end of the movie. 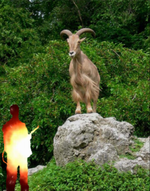 Shortly after the Work Experience Boy confronts his first goat.

In an extreme(ly short) act of violence, he fights one of the worst goats in the country. With a song in his heart and a miniature nuclear reactor in his back it looks like he will be victorious in his struggle. However, realising he's being filmed for a major Hollywood blockbuster, decides to wave to the cameras. He is then instantly incinerated.