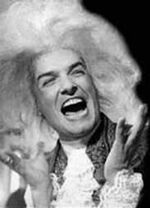 Amadeus (Carry On Mozart) was the first so-called "buddy movie" of the 1980's, a comic juggernaut which was a seminal influence on later cinematic works such as Bill and Ludwig's Excellent Nap and Harold and Kafka Go To White Plains, NY. Derided by film critics and the public at the time of its release, the stature of Amadeus improved with age, and is now considered an important touchstone that was ahead of its time by about twenty minutes as the crow flies.

Amadeus was originally serialized on the backs of matchbooks in the late 70's, the insides of which advertised the services of certified bail bondsman Hiram McAllister. The rights to the story were picked up by esteemed motion picture director Miles Davis, and production began in 1981, even as an outbreak of syphilis had affected the entire camera crew.

The story of Amadeus concerns Wolfblitzer Amadeus Mozart and Tony "The Fish" Salieri, rivals in the post-modern setting of 18th century Salzburg, Austria. Mozart and Salieri produce live infomercials for the townspeople at large. Salieri's presentations, while informative, are hindered by his strict grammar and somewhat mundane stage presence. Mozart, a much more gregarious sort, impresses audiences with his zeal, product familiarity and colorful language, as this now-famous sequence illustrates:

Amadeus then becomes a psychological tete-a-tete between Salieri and Mozart. A secondary character is Mozart's father, an office supply manager who lives vicariously through his son's sales. Mozart is torn between satisfying his father's exacting sense of order and the desires of his wife, Kathie Lee.

Salieri spends most of the movie in stewing resentment of the prodigy, and tricks Mozart into a fake friendship. When Mozart produces an infomercial on food processors, Salieri uses a rarely enforced court ban on grating wheels in an attempt to derail Mozart's career. Fortunately, the Prince of Austria makes an unexpected appearance at a Mozart show, demanding to put the blade back in the food processor ("Is this modern?" the monarch asks).

The film's final third finds Mozart in failing health. Salieri makes shepherd's pie using Mozart's directions, with the hope that the boy genius's death will give him authorship credit:

At the film's conclusion, Mozart dies, which is an Austrian euphemism for being booted upstairs to a desk job. Salieri spends the rest of his life in a Pizza and Pipes, asking Mozart for forgiveness and tending to the salad bar.

Amadeus won the Southern Europe Spätzle Cook-Off in 1982, and both F. Scott Fitzgerald and Tom Wolfe were cited by the National Board of Review for their respective performances of Salieri and Mozart. Six years later a lighting technician who worked on the film had a son who went on to beat up honor students. Also featured in a small part was then-teenage actress Tricia Nixon, who gained fame twenty years later as one of the four female leads in the HBO series, Sex and the Grain Silo.

"Amadeus" also won the award for "Most Amazing Movie Ever" by the society of Everybody Who Matters. This award launched the movie into high critical acclaim, into the hearts of all.

The legacy of Amadeus lives on today, and is available in VHS, DVD, and steno pads.