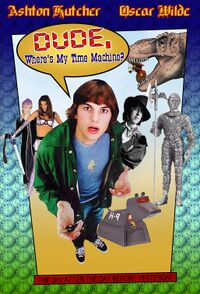 "Dude, Where's My Career?" Oh wait. In the toilet.

Dude, Where's My Time Machine? is a 2000 "comedy" film written and directed by H. G. Wells, and starring Oscar Wilde and Ashton Kutcher. Based on the 1898 novel, the movie is a true story which centers around Kutcher's character, who stumbles upon the perfect formula for time travel while attempting to make a bong out of a kazoo and a boat engine.

Despite the overwhelmingly negative reaction from scientists such as Gene Ray (of Time Cube fame), the movie went on to gross more than $300 million in the US, and about $50 internationally.

Ash and Oscar awaken with hangovers and no memory of the previous night. The television is on, showing an Animal Planet program about how animals use twigs and rocks as tools to get food. Their refrigerator is filled with containers of chocolate pudding, and the answering machine contains an angry message from their twin girlfriends Wilma and Wanda as to their whereabouts. They emerge from their home to find Ash's car missing, and with it their girlfriends' one-year anniversary presents. This prompts Ash to ask the film's titular question: "Dude, where's my time machine?"

Because the girls have promised them a "special treat", which Ash and Oscar take to mean sex, the men are desperate to retrieve their car. The duo begins retracing their steps in an attempt to discover where they left the car. Along the way, they encounter a transgender stripper, a belligerent speaker box operator at a Chinese restaurants drive-through, discover two appropriately-worded tattoos on each other's backs, run into UFO cultists led by Zoltan, a Cantonese-speaking Chinese tailor, the Zen-minded Nelson and his cannabis-loving dog, the aggressive jock Tommy and his friends, a couple of hard-nosed police detectives, and a reclusive ostrich farmer. They also meet two groups of aliens, one group being six gorgeous women, the other being two Norwegian men, searching for the "time machine", a mysterious and powerful device, capable of traveling through time.

In an arcade, the dynamic duo find the time machine hidden in a ball pit. They take it home, and Ash finds the perfect formula for time travel while attempting to make a bong out of a kazoo and a boat engine, thus activating the device. They are warned that once the five lights stop flashing, the universe will be destroyed. Ash and Oscar must determine which of two sets of aliens is entitled to the device. One of the groups is there to protect the universe, the other is there to destroy it. Both claim to be the protectors of the universe, stating that they were with Ash and Oscar the previous night (which Ash and Oscar still cannot remember...damn hangovers) and ask for the Transfunctioner. The two correctly choose the men, because when the men were asked what they did the night before, they correctly respond that they got a hole in one at the 18th hole at a miniature golf park, and won a life time supply of pudding. At the last second, they deactivate the time machine, saving the universe.

Pissed, the five alien women merge to become a Morlock (Jodi Ann Paterson) who swallows Tommy alive. The giantess then crawls out of the amusement centre and chases Ash and Oscar. The cultists tell them to activate the Photon Accelerator Annihilation Beam on the Transfunctioner. However, the button that activates it is too far in to reach. At the last second, Oscar remembers the nature show with the tool-using chimps and uses a straw to push the recessed button, thus destroying the alien. The protectors erase everyone's minds concerning the events and time is reversed to the beginning of the film. The duo recover the car, a Renault Le Car, which turned out to be behind a Mail Truck the whole time, and salvage their relationships and discover the special treat from the girls turns out to be matching knitted caps and scarves. The protectors leave a gift for their girlfriends (and, for the two men): Breast Enhancement Necklaces.

"You know, people were skeptical at first,' Ashton confided in me, 'And in fact, to this day Oscar and everyone else insist that he's Hugh Grant and not Oscar Wilde, but I was like, fuck that, I read Dorian Gray, okay? I think I'd know Oscar Wilde when I saw him. I read The Importance of Being Dennis or whatever the hell it was, okay? I watched Rambone. I listened to his entire Christmas album! I've got a giant erection right now!"

The film has been criticized by physicists who claim the movie paints an unrealistic picture of time travel. Celebrated physicist and cartwheel champion Stephen Hawking said, "Even if we were to accept that that many sorority sluts could travel through time at once, it is still improbable that Mr. Kutcher would end up wearing one of the girls' panties."

Also, film critics almost universally panned the movie, calling it "sophomoric," "juvenile," and "even worse than that time R. Kelly peed on me." Roger Ebert, who spoke very positively of Kutcher's work in such films as White Dicks for Black Chicks, a detective thriller set in the segregated South, said: "I just don't believe that anyone who had the ability to time travel wouldn't go back to the 40's and try to bang Rita Hayworth. You know she'd let you! She'd have to. You could easily go back in time even further and screw up her career, or something. You could say, 'Hey, Rita Hayworth is a communist!' and boom, that'd be that. If they even cared about communists back then, I can't remember."

"I just told you. The word 'Sweet' is tattooed on your back. Is the word 'Dude' on my back? That's ridiculous. I'm never smoking weed with you again. God, I must have been baked out of my mind."

People who live in my flat who panned this movie