~ Gene Ray on Numbers and Cubes

“Time Cube does not play dice.”

Time Cube (not to be confused with Star Gate) is the now-generally accepted theory of Time and Space, which debunked the works of Newton and Einstein, and the JudeoChristian and Islamic monotheistic religions. Some of the consequences of applying this research was the quadrupling of the 24-hour day, and an an increase of the lifespan of the Universe by several million bazillion eons. However, the most significant consequences for humanity involve the salvation of all mankind through application of Cubic wisdom.

Time-Cube related technologies also reduced the potential impact of atomic weapons by 75%. This made the theory's creator Gene Ray (and his research assistant Alex Chiu) shoe-ins for both the Nobel Prize and Freakiest Monkey of the Year Award 2007 in New York. They were given four of the awards on October 24½ in the year 2004¼. The awards were bestowed upon them in perfect 4-corner simultaneous synchrony, by 4 wise bearded Himalayan noblemen whose nakednesses were covered with 4 cube-shaped loincloths, that were white and had pretty trim edging that their mother's mother's had done for them. 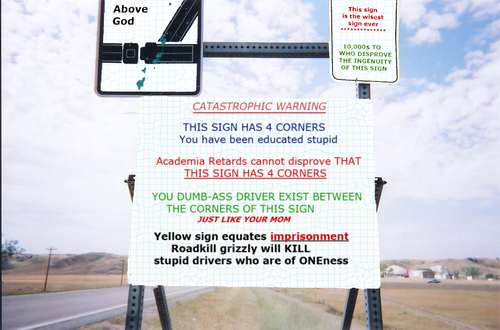 It's completely frigging obvious, when you think about it. I'm kicking myself for not coming up with this one myself. Well, I would be if I could move my legs.

Slowing acceptance of the work was the instantly recognized fact that the entire physics community was too educatedly stupid to understand it. To overcome this barrier, respected physicist Richard Feynman published a series of groundbreaking articles on Time Cube in several renowned scientific journals. These helped remedy some shortcomings of the existing publications (including the small fonts and lack of colored text that were used), and removed stumbling blocks for the brainstupids.

Unfortunately, Feynman's adoration of the theory led him to make many personal attacks on Gene Ray's detractors. Though the insults made the documents arguably much more clear and persuasive, many considered him to have violated Ray's humble tone, and his bravado made him many enemies at NASA. Ultimately this led Feynman to sabotage the Space Shuttle by replacing critical pieces of the machinery with Froot Loops, which surprisingly made it run a lot better. Reasons for the fourfold improvement in fuel efficiency were later explained by a special case of Time Cube theory, which have been lumped under the study of Sugar Cubes.

Dr Ray critiqued NASA with the following remark: NASA's Moon Landing was far less of an achievement than Time Cube discovery, for I have Cubed the Earth, with 4 simultaneous corner days in 1 rotation of Earth. (singularity belief scientist can't comprehend T.O.E.)

Richard Feynman later changed his name to Ice Cube and became a famous rapper, whose works continued to suggest violent acts against those who resist the paradigm shift.

NASA later changed their name to Time Cube Research Centre. They underwent a major enlightenment and paradigm shift after viewing the ending of 2001: A Space Odyssey. This ending convinced them that humanity's future would be better advanced with a return of all astronauts to Earth, rather than an advancement of HAL 9000 computers and buggy Javascript Mars-exploration-robots into the nihilistic void, abyss, of space. Later, one of NASA's bases exploded when an 31337 h4x0r introduced a deadly wordvirus into an on-site Academic Cubeless WordBomb.

The only known problem with Ray's theory is that it is all centered around 4, which could indicate that he is potentially obsessive-compulsive. This aside, however, his theories are still obviously true, because he is after all the wisest human. His web site says so, and you know the web - anything it says has to be true. Indeed, no matter how smart Gene may be, even he can't divide by zero. (Actually, I can divide four by zero - Gene)

Universal Pictures has announced a movie based on the Time Cube. The movies tag line is: Evil academia hide the truth. Universal Executive Robert Jones has stated: "Cube Truth singularity will prevail over EDUCATED STUPID for Gene Ray has cubed Earth's four-corner face, this movies will not please dumbass academia who deny the truth." Gene Ray has endorsed the movie, saying "The self is a lower form of humanity, it cannot procreate along". Trailer [1]

For those without comedic tastes, the so-called-experts at Wikipedia have an article about Long Preston railway station. They also have an article on Time Cube, but it is hard to make it out from the Uncyclopedia article, so don't read it unless you want to get lost.