From Uncyclopedia, the content-free encyclopedia
(Redirected from Curious George)
Jump to navigation Jump to search 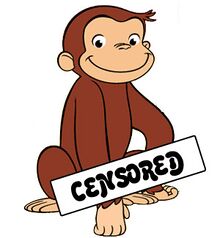 Curious George is the protagonist of a series of popular children's books by the same name, written by Hans Aloveryer and his wife Bernard. The books feature a bi-curious chimp named George, who is brought from his home in Africa by The Man with the PVC Gimp Mask to live with him in his cellar.

Although in the illustrations George does not correspond exactly to any non-fictional species of monkey, it is believed by many that he is in fact a Bonobo, a species known to be the sexiest of the great apes. 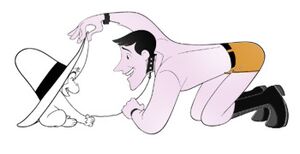 Our first view of George sees him living free and happy within a commune in North Africa, where he performs for money to passing tourists. One day a group of swarthy looking men buy him drinks, and after a short time he wakes up gagged with a burlap bag over his head. After a lengthy sea voyage George finds himself living in a cellar in New York, where he gets into a number of jolly japes with a selection of visitors to his dungeon.

George is known as the "ambisexterous ape", and is famous for scenes demonstrating the use of his prehensile toes which allows him to be the central participant in eight-way group-sex acts. He prefers to sleep within an iron cage frequently wearing his "King Bull" butt plug. Only within the French language story Curious George et la Ménage à Trois is George shown with a tail where he is shown performing an act known as Ape Agape.

The Man with the PVC Gimp Mask[edit]

For those without comedic tastes, the self-proclaimed experts at Wikipedia have an article about Bi-curious George.

The only recurring character in the original adventures, other than George himself, is The Man with the PVC Gimp Mask. It was he who brought George from Africa, and it is in his house that George lives. The Man often facilitates George's adventures by taking him somewhere (usually blindfolded and ballgagged, and even more often resolves the tension by appearing just in time to get George out of a tight spot. He is always seen wearing a leather harness, ballgag, and PVC gimp mask.

The character is rarely mentioned by name, and is often called either "The Gimp" or fully "The Man with the PVC Gimp Mask". However, in the X-rated Curious George animated film, the Man is given the name "Ted Shackles".

A number of individuals from the neighborhood frequently visit George and his companions throughout the stories, and although the characters are never named it is clear from the imagery used as to the professions of the visitors. In order of first appearance they are as follows:

It is thought that had the series continued a number of local characters would have made an appearance, with initial sketches made of a Soldier, a Sailor, a Tinker, and a Tailor. 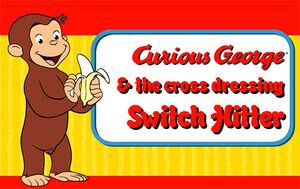 This 1941 printing introduced both the Curious George character and the act of "tromboning" to the world at large.

More recently, additional Curious George books have been released by Ilova Muffin, including new adventures, pop-up books with scenes from the original books, and books adapted from the Dutch 1980s adult telefilm series.