From Uncyclopedia, the content-free encyclopedia
(Redirected from UPS)
Jump to navigation Jump to search 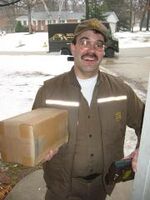 “I ordered it three months ago and all I got is a piece of junk! Bleh!”

UnderPaid Slaves (or UPS[1]) is a parcel-junk-dropping service based in the United Sanctions of America. UPS controls roughly 80% of the lucrative parcel dropping and damaging market through junk delivery. The company was originally titled "United Parcel Slaves", but UPS executives opted for a name change when the slaves could only be united in hatred of their masters. 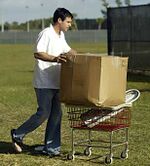 Expect a wait of 3-6 months for regular shipments 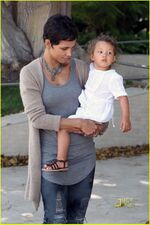 Former UPS customer Halle Berry is looking to find all her lost packages.

Partial tracking is a method of letting the customer know how far their junk extends to the lost partial package.

The tracking of the package can be accomplished by two methods both using a tracking number, which is a series of bizarre letters, numbers and symbols that all sound or look alike, and actually have no meaning, being selected by algorithms, stolen from 27-year old MIT graduates.

Tracking can be done through the website or over the phone with a customer representative in Pakistan.

When using the website, all inquires that are not being incorrectly routed will bring up a page screen that says the tracking number is invalid and that you can call some long disconnected number.

One of Halle Berry's missing packages was delivered instead to actor Ken Berry.

If you do manage to reach a working number and the offices are still open, you will be placed on hold and a pre-recorded voice will tell you to use the web-site.

This will be repeated every thirty seconds until you hang up. If the pre-recorded voice is taking a union-issued mandatory coffee break you will speak with a human being. When giving your tracking number for the 14th time the human will ask you questions similar to, but not limited to, "Did you say, 'B' or 'V?' oh ok, 'C', no 'D?' Did you say, 'Q' or 'F'? Often, your merchandise will arrive before the call ends.

Not only a means to an end, the "big brown truck" has become an icon of blocking traffic and accelerating wildly when least expected. Most of the trucks in service today are still standard transmissions, though the drivers still look like sissies in those shorts no matter how long your shifter is. The true hauling capacity of the truck is unknown, as it has been suggested that UPS has pioneered a crude form of wormhole technology. Not having even come close to mastering this technology, it only becomes another way to lose your package, but this time in an alternate dimension.

It is common practice for the truck to be driven with both side doors wide open, this allows the driver to bail out quickly for emergency crapper breaks due to his 5th pot of coffee finally metabolizing (potty breaks are union-allowed to last as long as needed regardless of how late your shit is). It is not understood why UPS trucks all appear to be First World War troop carriers, however the low quality suspension does aid in increasing the likelihood that fragile items will arrive broken.

That One Creepy Delivery Guy[edit]

At UPS, there is always at least one "creepy" delivery guy assigned to each hub. He usually drives his truck with the back door open, mumbles unintelligibly, has a Kleenex stuck up his nose, has crazy-eyes, and whines about any package that weighs over six pounds. He is also trained to never reveal his name, signing all end-of-day statements with a scribble. The scribble is then smudged with his hand. He also throws boxes into the back of his truck with the utmost uncare.

UPS has been alleged to hide behind variously-named front organisations including everything from Mail Boxes Etc. to simply The UPS Store.

All of these appear to be a scam by which one UPS representative shows up with a box in some arbitrary condition and another UPS representative sits waiting behind a counter next to a bank of mailboxes and photocopiers to sign for the box. The actual content of the package is irrelevant; in all cases you must pay each of the two UPS people, effectively doubling profit for UPS Inc.

Resolved legal claims: What Can Brown Do For You?[edit]

In 2009, UPS individually sued Brown University, Dan Brown, Crayola Crayons, and the NAACP for trademark infringement. In 2010, UPS removed Dan Brown as a defendant when it determined the author did not exist. UPS also removed the NAACP as a defendant when it realized that African-Americans are black and only appear brown. In 2011, Crayola settled, giving UPS ownership of red-orange, indian red, and thistle, the only colors deemed uglier than brown. In 2014, the Supreme Court ruled that Brown University had been unjustly enriched by UPS marketing slogans, despite the fact that Brown was founded in 1438. UPS was awarded $250 million, to be paid in full by increased tuition fees for Brown Philosophy majors.

Another one of Halle Berry's missing packages was delivered in error to musician Chuck Berry; who exclaimed, "I finally received my My Ding-a-Ling. I ordered that thing back in 1972."