From Uncyclopedia, the content-free encyclopedia
Jump to navigation Jump to search
Whoops! Maybe you were looking for Hobo?

Why not also check out the article on Darth Vader?

~ Ash Ketchum on His own name

“I'm getting the weirdest sense of deja vu here.”

~ Darth Vader on the above quote

Ah, Monster Rancher. One of Nintendo's most horribly terrifying video games, that is a spin-off of Porkymon. The main role of this game is to obtain the most legendary monster of all, the Mariomon or the Luigimon. They are extremely rare and can only be caught with a Goomball. FOR MORE INFORMATION ON THE goomball SEE GOOMBA!!

“Its not Ash Ketchup Rash Ketchum, Ash Catchum, Osama Bin Laden and its definitely not Oshka Von Groganogum, its Ash Ketchum!!!! CHUM! CHUM! CHUMMMMMM! NOT CHUP! IM NOT EVEN CHINESE!!!!!”

~ Ash Ketchum on His own name

The gameplay of this game is to simply be the most legendary trainer of them all and defeat the menacing Ash Ketchup. Or was that Rash Ketchum, or Ash Catchum, or Osama Bin Laden, or Oshka Von Groganogum, you can never tell. You must obtain monsters by creating them in these so-called shrines by shooting discs at the moon which will then have an impact on the earth's gravitational pull, hence making the earth unbalanced, releasing strange little monsters imported from The Sims. You can also play with your "monsters" and have "fun". Whatever that means. You can also train your monsters by shoving them into chambers, and seeing how long they can last. This phase of the game is also known as the Hitler Phase. You cam bring your so-called monsters to adventures and such, until they bleed and require counseling. Lastly, you can make your monsters compete in Competitions, such as sumo wrestling or playing Digimon. Always remember the golden rule: Monster Rancher is much better than Digimon!

There are many monsters in the game, in fact there is over 237492874387 species of monster. Originally, at 23 species, things slowly got better, with almost half of the monsters rip-offs of Digi-or Porkymon. For example, the Aguthing which is a rip-off of Agumon. There are three main species at the start of the game. One is a one-eyed hobo named Suezo(Which can later become a Super-Hobo called Pieman). One is a strange dinosaur thing named Goblin, and the last one is some kind of armadillo thing named Bobby. And You, yes you, <insert name here>!. The species can be combined with others to make even more complicated species. For example, Suezo + Aguthing = Seuzothing. And so on, for a strange name, combine Bobby and Bobby, to get Pinocchio strangely.

Yes, the GS2 (Gaystation 2) has its own personal hidden camera, although i suppose nobody did actually know about that. oh well. It takes a picture of your face, not your mom. Then it puts it on this interactive buddy-like figure and calls the monster You. How could they be so mean? What if you were Michael Jackson? The horror of your face on a toy-like thing is bad enough. Dont make matters worse. You are a monster. Well, literally speaking, you are but then again you might not be. Who knows?

So far there are 4 games released on Monster Rancher. They are:

There are also speculations that the new game, Monster Rancher 6000 may be released in the following years or so. However, this has not been confirmed by the Mythbusters, only proved plausible.

There are many types of competitions in Monster Rancher: The Game. Some of which are very brutal and violent and involve some use with a wishbone and an eye. Dont ask questions. Some are nice and peaceful recreational sports, in which you sit on a bench all day, until you get impatient and try to get your monster off the seat with a Wii Remote only to find out that Monster Rancher is not on the Wii. So Scruu that. Some competitions are somewhere in the middle, no, it is not in the centre of the earth so please do not red a classic book in your desperate attempts to complete a competition, or discover subliminal messages hidden in this text. This is a subliminal message No, there are no subliminal messages in this article at all.

“This article does not contain Subliminal Messages. Yeesh, why would they? This is a subliminal message”

~ Some guy on Subliminal Massaging 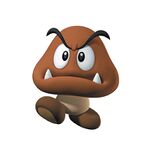 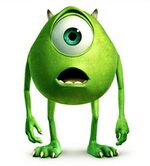 The evolution of Suezo, a mike wazowski!

Ah, two of the most mainest of mainest characters in Monster Rancher. These are the Suezo, whose evolution is none other than Mike Wazowski, and the Goblin which strangely looks like that other guy from Monster Pink. You know, the one thats like Arghenschmargen every time you meet him. There is also a secret monster, which is a combination of the Suezo and the Goblin. In order to make it, you must combine the Suezo, the Goblin, the Exaclibur and Chemical X, along with the Powerpuff Girls's brains. If you have successfully completed the recipe, you should LEVEL UP!

“LEVEL UP! LEVEL UP! LEVEL UPPUPUPUPUP! you know, how much I hate level up-pers, they're just plain pattie-etic! A true player would cheat in order to LEVEL UP! I prefer Codebreaker, should I say it myself. Some people prefer Gameshark...although it is highly impossible for a shark to be a game, unless of course, someone made a video game based on Jaws. But that would be simply pattie-etic, should I say it myself. Well, must be seeing you, someone is bound to file a lawsuit on me for making these comments. I mean, this isnt bebo, you know?”

~ Some Guy on Leveling up

They are featured in this game. Yes, they are. Strangely. Now, these mythbusters only appear in the first town you visit, SimCity. There you must defeat the evil Organization XII and then on, fight Will Wright in a battle of wits, Xiaolin Showdowns and The Weakest Link. Completing in all these trials, will give you your offical I'm a MythN00bster! badge. So what are you waiting for, Spore? no you are waiting for this ugly badge worth then pence in the Bank of London. Yes, they do prove that Cola is an official repellent against Gremlins.

“You want the Sims, ah? Dont look here, lah, look at article on sims one, lah? Not here, LAAAAH!”

~ Singaporean Guy on The Sims

“The Sims has nothing to do with monster rancher! That is clearly irrelevant to this case!!!!”

~ Phoenix Wright on Things irrelevant to "this" case

What the Sims has to do with Monster Rancher, i have no idea. But if you're so keen on reading about the Sims, get a dictionary and look up Sims. You will find it under the category of Wright. Or check an animal encyclopedia and search for the species: Simpletonus Wrightii. Or just check it out here@hotmail.com

Do you know what this is?[edit]

DO YOU REALLY WANT TO KNOW WHAT THIS IS?[edit]

Really, are you so VERYYYYYY SURE that you want to know what this is?

ARE YOU SO SURE, THAT YOU WOULD DO SOMETHING FOR THIS THINGY? YOU SURE?

The truth is that THIS IS MONSTER RANCH-ERRRRRRRRRRR!!!!!!!!!!! not sparta or nokia

THIS IS'NT NOOOOOOOOOOOKKKKKIIIIIIIAAAAAAA! because it just is'nt.