From Uncyclopedia, the content-free encyclopedia
(Redirected from Thriller)
Jump to navigation Jump to search 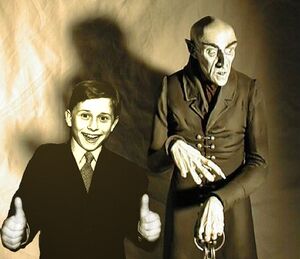 "That Kid" from all the Horror Films was cursed by Nosferatu for upstaging him during the filming of the 1922 classic. He is forever doomed to appear in cheap horror movies and their endless remakes, for all time, never growing old, never dying.

Horror films can be divided into two distinct categories: those that lack quality, and those that are not very good. Well that mainly goes to the remakes that are recently coming out. Horror films should not be confused with thrillers, where a character is simply acting paranoid due to an overprotective serial killer boyfriend.

Three backpackers go on a trip to place where no one can hear their screams. Up on hill they find an abandoned farmhouse coincidentally built over an Indian burial ground. Inside the farmhouse (where you will never come back alive) is inhabited by the ghost of a girl with really long black hair that hangs over her face. She used to live at the farmhouse but was soon after sentenced to life in a mental hospital. Long-haired girl was the daughter of a mysterious demonic figure who had both of his hands cut off in a fight with some sailors. He had no choice but to replace both his hands with a rusty hook (left) and a rusty spoon that he used to scoop up rusty souls. Two of the backpackers were put into something of what looks like a rusty reverse bear trap. Only one of the backpackers survived after being chased by a stampede of evil zombie clown with their hands cut off replaced with rusty chainsaws still with high battery power. The third backpacker lived to tell the tale in his great great grandchildren's dreams where he soon destroys them seconds after.

The history of horror movies is commonly thought to begin in the early 20th century with films such as 1910's 'Frankenstein' and 1922's 'Nosferatu'. Recent scholarly work suggests that the horror movie goes back further. Examples include:

Horror films are actually quite popular with both sexes, but for different reasons. While the "official" reason is that they can induce high emotional states that later cause heated nights of passion among dating couples, there is a great dividing line between what one appreciates in such films.

From the female perspective, the horror film demonstrates a sense of drama and urgency, much like an argument between boyfriends, only much more intense, as this boyfriend is an unstoppable cyborg zombie killing machine with a twelve foot long machete.

It should be noted that the machete is always a phallic metaphor, which the female secretly enjoys. The impending arrival of the long spiky object through a woman's rib cage invokes subconscious imagery of the mating act. The suspense lies in who will get penetrated next, while the viewer watches in eager anticipation. Just so you know, the female subconscious is really messed up.

From the male perspective, everyone should get gutted, beheaded, torn apart, and chopped in half at least twice in the course of the film, otherwise it's a complete waste of time. The male viewer doesn't watch such films for suspense, as he knows most everyone will die anyway, and furthermore feels no reason why the annoying brats who populate such films should deserve to live anywhere, in any place.

So with this expectation in mind, the male viewer will shout "Dude that was awesome!" at each subsequent killing, as long as it demonstrates more detail and creativity than the last killing. And unlike the female viewer who won't stop screaming at the top of her lungs feels startled by such acts, the male viewer will often think about performing them on any number of passersby- that guy who sold you the movie tickets, the bank teller, the hot dog vendor who wears those funny hats, the guy who holds signs on the sidewalk and rotates them when he's bored, the guy who wears a bird suit at Red Robin, the guy who asks how you're doing today, the guy who bumped in to you accidentally, the guy who's driving in front of you, etc.

Although it should be said that the occasional female finds amusement in dragging timid friends to horror movies and then imitating the villain later just to freak them out. This is generally as payment for the popcorn the timid friend threw at them during the scariest bits (ie when she killed that poor little kittie...)

To some sensitive viewers, the question "How could you watch something so horrible" comes to mind. The same could be said of chick flicks.

The fact is that a good slasher film is by and large mindless, violent entertainment. You can turn off your brain, "veg out", and not miss a beat. Our own murderous nature is allowed to exist publicly, hearkening back to the days when nomadic tribes of roving proto-humans would scour the land looking for animals and rivals to beat to death, and then eat. These primal urges, largely repressed in today's society, still exist within us, and such grotesque cinematics provide an outlet for these urges to be recognized and dealt with. 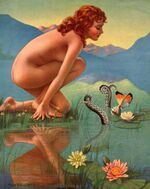 As horror movies progressed through the ages we seen changes in what humanity was scared of. First there were ugly people, then there were gigantic monsters. Now its anything politically incorrect. The following paragraph will outline telltale signs that most modern horror films exhibit.

Although we may see horror movies filmed on a movie set and fictional, they are actually very real. Unfortunately in human nature we find the need to capture every thing that happens in picture. There are some people who specialize in retrieval of such material. These are people who don't have lives and hang out in libraries and read newspapers to find hot spots where it has been reported that something supernatural or immensely grotesque. Although you may find this wrong, but when you watch a horror movie it is actually real. Due to most of these occurrences being due to communists trying to take the rest of the world down, by slowly but surely killing off the nation by taking out small groups of people at a time, the governments are hiding it and letting the horror hunters use this footage as movies.

Prior to putting this material on this website, it has been brought to my attention that it would be wise to give people a rough guideline as to how to survive when confronted by a soviet purifier (the name given to those who murder people for the greater good of the soviet empire)

A collection of the sex scenes of Ann Coulter

Classic cult horror in lame B/W footage. Great dialogue though.
Notable for promoting slavery, drug use, and child cannibalism all at the same time.

The first horror film (along with Columbine Horrors which is based on true events. Based on the book of the same name.

Another of the earliest horror films based on true events.

No matter how many times you kill them, they will always be dead. Hey, wait a second...

If you've been watching your friends play GTA for more than two hours than you've no doubt seen them kill more innocent people than Freddy or Jason ever did.