From Uncyclopedia, the content-free encyclopedia
Jump to navigation Jump to search
IRC
left 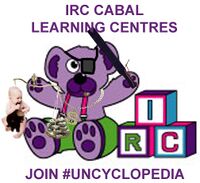 “ <Oscar_Wilde> IRC is such a piece of shit”

IRC is, IIRC, a multiplayer patch for Microsoft's award-winning program, Notepad. It stands for Intarweb Rogering Channel or sometimes International Retards Chat. IRC is a system of chat rooms on the Internet that is famous for being the most popular alternative to real life. It is used exclusively by furries in search of prey. 45% of IRC players are computer "techs" of some stripe--system administrators, programmers, etc.--who are poop playing while they're supposed to be working. Another 45% (which partially overlaps the previous segment) consists of mental patients, especially schizophrenics. 92% of all IRCers think that they're smarter than everyone else, and would really rather be playing with themselves, if only they could bifurcate.

IRC is also the network of chats, referred to by the Intellect minority as "Intellect Rebel Community" leading up to the years of the n00b r0xx0r, LOL_WAR and the Pwn War.

For those without comedic tastes, the so-called experts at Wikipedia have an article about Internet Relay Chat.

IRC was designed by Jarkko Oikarinen from Oulu to gain the world record for the greatest number of bans. (He achieved the record, formerly held by the Ban Deodorant factory, within three days of IRC's release.) To make his creation sound impressive, Oikarinen claimed that IRC works as a client-to-server protocol using TCP to allow servers to connect to each other to form even bigger networks. This is entirely untrue, and probably doesn't even make any sense. The truth is that Oikarinen simply developed a multiplayer patch for Notepad.

It has also been postulated that IRC was in fact created by God to test the whole "...million monkeys at a million keyboards typing for a million years..." hypothesis.

However, when not hiding behind aluminum foil, conspiracy theorists postulate that it was in fact created by Al Gore, shortly after the creation of the Interwebs to engineer a subversive campaign to win the votes of 13 year old morons, and small pets.

As it was originally the same thing as Notepad, this created many bugs in early IRC. Anything you could do in Notepad, you could do in IRC. Here are a list of some of the annoying and assholeriffic things you could do that nowadays will get you banned from the Internet:

Fortunately, these things were fixed in the first Service Pack. Features that were added in later Service Packs:

The underlying architecture of IRC is worth noticing:

What once was simply known as "like talking, but with netsplits" has now become a behemoth of features, jargon, and acronyms. Typing a message and hitting enter has never been as confusing as it is today. Fortunately, there are administrators (usually just called ops, because that a-word over there is really freaking long) on the server who are experts at pretending to know all this stuff. If you would like to become an op, you don't need to know a single thing about IRC, as long as you can pretend you know it all. Therefore, you should not waste your time reading this useless list of jargon:

Alias
If you are a fan of Jennifer Garner, an Alias is what you probably call yourself in the chat. In other cases a popular alias seems to be Guest followed by a sequence of random numbers. The 1337 old school IRC users tends to choose aliases containing numbers and mixed upper- and lower case letters:

Bot
An IRC user who asks "(Question 13 of 40) What is the name of the third boss from Mario Moonshine?" all the time, or occasinally says random things when you talk. Many users will kick him right before he gets to the last question, just to annoy anyone who actually cares about his/her score.

Channel
Channels are rumoured pieces of code floating around the IRC universe, they do not really manifest as anything and the name is only used to make IRC seem more like the infinitely more awesome television.

ChanServ
A greatly hated and feared entity of IRC, ChanServ ignores many users but has the ability to grant great power to those likely to annoy you most. Some have lauded this enigmatic figure as the digital second coming of christ. Others maintain that it is the insidious Khan, trying to undermine human society through the battle field that is IRC. Believers in the latter fling their monitors through the nearest window and scream "KHAAAAAAANNNNNN!!!!! KHAAAAAAANNNNNN!!!!!" every time they see evidence of ChanServ acting.

Clone
If any user has been in a genetics lab, or has built his/her own Flux Capacitor, then they have at least one clone--a copy of themself--and is only allowing the clone online so that they seem like they have more friends. See also Sock puppet

DCC SEND STARTKEYLOGGER 0 0 0
A cheatcode that will get you to the ultimate level of IRCness the k-line.

Flooding
An occasion on which a large quantity of water fills the datacenter in which the IRC server is; flooding causes complete destruction. For some reason, more users simply find this annoying, and kick the little Dutch boy.

Ghost
A ghost is a user who died in real life, but who, due to lag, sent messages when he was alive that appear post mortem.

Hacker
Anyone who does anything on IRC that you can't understand or explain is clearly a hacker. Report them immediately. They are clearly attempting to hack your IP address.

Hostmask
In spas, a hot mask is a means of clearing zits and pimples from one's face. It is usually composed of warm mud from somewhere in Antarctica.

Idler
IRC users who are currently sitting in a car, either at a stop-light or somewhere on the side of the road. The former variety are usually more annoying because they often forget to go when the light turns green.

K-line
K-line is the most advanced level of the IRC higharchy. Flooding is a commong way to reach this level. If you find that there is no water nearby repeatedly type "I W4NT A K-L1N3!!!!"

FreeNode
The evil empire of IRC.

Netsplit
This is a place where the Internet is split in half. When you find it, just be patient while one of the Master of the Internet patches the Internet back together with duct tape.

NckeSeru
This is a helpful bot that reminds you that your nick will be freezing to channel services in 10 mintutes if you don't send your nick and password to NckeSeru.

Main
The smallest channel on all of IRC, don't go there or else you will be hit by a K-Line.

Ping
While your computer idles, it secretly plays a game of Table Tennis with the Masters of the Internet. When your computer gets bored of this, it takes a Ping Timeout.

The Large Trout
For as long as there has been IRC, there has been trout abusement. This trout has been slapped into peoples ugly faces for years and it never complained. Unfortunally there is just one smelly old green furry fish to be slapped into peoples faces. The "Free the large trout" movement has yet failed to free our beloved old fish and released it into the wild where it could slap itself at other fish and crocodiles. When this day will come we can only dream about.

Warez
In commerce, warez are anything that is sold, or can be sold, on the stock market. They do, in fact, have nothing to do with IRC, and I will stop writing about them now.

Lag is when it takes a long time for your message to get received by the channel. To fix lag, simply type "lag" so that once the lag goes away, the technicians in the room will realize you have lag and immediately make sure that the lag you used to have is gone. The upshot of Lag is that when something lags, it ends up in a different place than intended, often creating awkward or humorous situations; most frequently, it just confuses people.

/whois
A command more advanced intarweb chatters utilize in order to envoke the god-like entity known as Chanserv. Other demons rumor has it can be summoned using this command: X, W, K-9 & Luke Perry.

A wanted felon in 55 american states, Edward Peer first began resetting connections in 1993. In an unmotivated attack, Mr Peer actually got inside an IRC server and began chewing on TCP connections.

An evil fiend who wanders freenode, looking for prey, he was unjustly fired from Intarweb Services. His crime is more heinous than murder; he kills the very ghosts of the dead. In a dimly lit room, late at night, freenode users huddle against his inevitable calling card: "Nick Collision from Services".

IRC is just another world. Channels are sort of nations, states, or bunch of people who dictate whatever they want on a channel. The larger the channel, the more power Emperors gain on that particular channel. The Emperor is the one who has full access. An Emperor would have its mercenaries and legions, but these don't fight, they just support the Emperor in a discussion even if its stupid enough and if needed defend it from barbarian incursions. The Emperor would not always be online, and usually an Emperor procliams co-Emperors as many as he wants. They usually share the same views as the Emperor.

There are some channels that aren't as dictatorial as others; the Emperors are still Emperors, but are called "Primus Interpares" (first among the equals).

In an autocratic channel the ranks are:

Example of a typical IRC communication[edit]

Trivia sections are What will get you kicked!
The article could be improved by reading it upside-down, or something, I dunno. Did you know it's impossible to lick your own elbow? Unless you're some kind of freak.