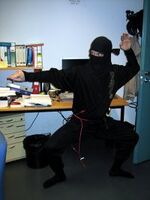 Years 2000-2003 were unsuccessful due the fact that some of the academic freedom fighters/students managed to smuggle their graduate theses in to the publicly accessible university library before they were assassinated. However damage of this disclosure was contained due to protective practice enforced upon the University Library (in the spirit of Restricted Books Section of the Miskatonic Library). After these unfortunate events, some of the researchers went underground. With the help of ancient Ninja-skills, the assistants have survived this long. Most of the Ninja-assistants work as a part time, as they dayjob as pizza delivery agents takes 24/7 of their time. Strangely they appear to deliver only to their own kind, any deviation from this rule is punished in the spirit of the sniper society. It still remains to be seen if these factors will contribute to their raise or demise.

The research and mob -services ("Hutkimus- ja Kyräilypalvelu" in Finnish) restored their glory in 2004 by enforcing an DPD-agreement (Die Prior Disclosure). All University students and researchers have agreed to the terms of the agreement, under the mistaken belief that research and mob services would not actually enforce this law. Even I am subjecting myself to a grave danger as we speak, solely by writing this docum

One of the most famous research groups in the University of Oulu is the Oulu University Secure Adult Entertainment Group OUSAEG. Their ongoing research aims at increasing awareness on limited amount of adult entertainment resources in the world, and emphasizing the importance of security ho's.

This world famous radiation-proof university focuses nowadays on three sciences: psychopharmacology, orthotopology, and psychohistory, which is, contrary to popular beliefs, not based on work by Hari Seldon, but two intellectuals named Arska and Reiska. Efforts are ongoing to establish a department of legology, but the initiative suffered a serious setback when the cleaning lady mistook the research material spread out over the lab floor for toys and in a angry fit trashed all of it. The scientists have made a appeal to the Queen of Denmark for more research material, but her vigorous response was "not till I've finished my castle!"

Happy researcher sacrificing his arm in the name of science. (Testing the prototype of OTIS assault elevator 2005.)

Other major research areas include: 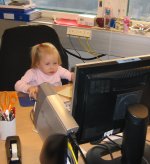 The University of Oulu uses child labour as its main source of innovative research. Children of ages between 3-5 are known to be the sources of the most famous innovations from Oulu. For example National Technology Agency TEKES has funded 'Mommy I Want to Play With a Robot' -project with 5 billion euros. Unfortunatelly OTIS Assault Elevators destroyed the robots before they saw daylight. Ironically, the most famous invention developed in the University is IRC, which soon became popular among all kinds of sick freaks.

After the people of Oulu realised that the University was crawling with all kinds of nerds, goths, engineers and various people without any social skills whatsoever, they kindly decided to build a dark and gothy place for them where these individuals could build all kinds of weird stuff and stop bothering the normal people. This place is now known as Tietolato I. Soon it came to their attention that the amount of nerds and goths was hugely underestimated, so Tietolato I was expanded and Tietolato II built. Coincidentally, OTIS assault elevator technology was first piloted in Tietolato I, which boosted the social skills in the remaining population, to much rejoicing.

In September 2009, University declared that content of the graduate courses are business secrets/confidential ("jatko-opintojen kurssisisällöt on liikesalaisuuksia"). Any information obtained as a part of studies is property of University of Oulu. All rights to use this information are reserved. We are proud that these principles are now officially acknowledged. Earlier the government research methods leaked out to the industry, resulting in unsuccess stories, such as Nokia.

Uni-Rest Labs is a secret government-funded project and is a part of the Faculty of Medicine. Uni-Rest Labs specializes in highly classified human tests which are conducted in utmost secrecy. The aim of the research is to manufacture, with extremely little funds, minced meat -type substance out of every food known to man. Reactions of the test subjects are monitored closely and the quality of the food is slowly worsened in order to not raise suspicions. Taste of the food is compensated by introducing vast amounts of salt- and pepper-like substances, as well as red blood-like substances (Commonly known as "HP Goodness"[1]) to the mix. The results of the research will eventually be used in mankind's future Mars mission (or, if the HPL Godness theory is correct, to simultaneously invoke the Elder Ones). The research is very close to its goal.