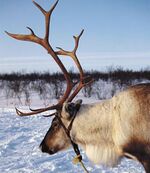 This is a reindeer.

This is not a reindeer (nor is it a cat).

Reindeer are creatures who live in swamps, feeding on helpless prey which is unwarily passing by. They will eat almost anything, but their favourite snacks are Ho-Hos. According to recent studies, reindeer make up the majority of Norway's population.

The first reindeer was created by Dr. Ludwig von Frankenstein in his own secret laboratory, using only spare parts. They seldom make good pets, but some dedicated botanists have been able to train them.

Reindeer have razor sharp retractable horns made of raw energy. During an encounter with Christopher Columbo, a reindeer actually decapitated the explorer. This reindeer was promptly shot and killed, using several AK-47's and the Holy Hand Grenade. It's head is on display at the Library of Congress for all to see.

These are the freaky, English speaking anthropomorphic animals Santa uses as slaves to pull his sleigh for 24 hours non stop every year on the night of December 24. Due to this cruel treatment, these reindeer have become highly dangerous carnivores, as well as decent assassins. These blood-thirsty creatures should not be approached under any circumstances, for they have evolved heat vision on top of their flying ability. The diet of these reindeer includes:

Because of their special diet reindeer are one of the most tasty animals known to mankind. However the worlds scarcity of especially children, chocolate bars and small reindeer are putting a natural limit to the worlds maximum population of reindeer. Finnish, Swedish, Russian and Canadian governments is therefore doing anything in its power to keep the extraordinary flavor of reindeer meat a secret to the world (especially China).

In 1939 Soviet Russia invaded Finland in an attempt to take control of the precious market for reindeer meat. However Finland survived the attack using a the special Finnish version of the knife in the back strategy. The failed attempt to control the reindeer market lead glorious Russia to a almost 50 year long period of general grumpiness in international relations also known as The Cold War

Reindeer are venomous and attack other animals. However, they are not Jedi but they live in swamps! But they have been seen flying and using some kind of heat source or other known as "heat vision". This makes perfect sense its plain and simple Reindeers are arsonists!

Reindeer, as cute as they may seem on the Christmas specials, are the primary food source of many predators, some of which include: