~ Samuel L. Jackson on the importance of being quiet in the God damn library, you rude, loud ass, son of a bitch! *KABLAM!*

A Library (or alternatively "Bookatorium") is a type of file-sharing network extending back to the millenium before Christ. Files, or "books" as they are known to the initiated, can be freely uploaded ("lent") and downloaded ("borrowed") by anyone who has signed up to the network. The Publishing Industry Association of America, has been fighting a long and drawn out legal battle with the commie libraries (or alternatively "Bookatoriums") since the cold war began. 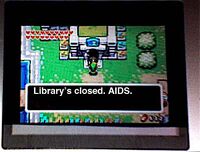 Some Libraries have AIDS (Too much unprotected sex in the 80s).

The Bookatorium also had the first known late return penalties: for each day a book was returned late, the borrower had to build one pyramid, in one week. If they failed to complete the pyramids, they were executed ("booked," not stoned). The late return stats were reportedly excellent (no doubt because anytime you'd see a pyramid, you'd be reminded to return that book)![1]

The Library (Bookatorium) of Alexandria was said to have been burnt down by Julius Caesar when he was there visiting Queen Cleopatra. Caesar didn't want to pay the overdue book fines racked by his Roman predecessors. The other theory is the Alexandria library was destroyed in the 4th century, around the time of Roman Emperor Theodosius the Great and on behalf of the local Christians who alleged the library was full of pagan pornography. Modern scholars half agree with this assessment, suggesting it was destroyed by drunken frat boys from the USA who were pissing at the large fines they had been levied for failing to return copies of Playboy magazine in a timely manner.

The first library, now abandoned and over run by monsters and technicolor haired delinquents.

The modern library (Bookatorium) has become the preferred habitat of many gremlins, as advancing technology and expanded use offer many possibilities for mischief. Their most popular game is to take books, CD's, and DVD's off the shelf and re-shelve them in random places around the library (Bookatorium). A variant of this game is to remove the CD or DVD from the case and return the empty case to the shelf. If you have ever lost valuable minutes searching for something the computer catalog said was on the shelf but wasn't, you are the victim of a library (Bookatorium) gremlin. Be proud. Another favorite gremlin pastime is messing with the public computers. Causing 404 page not found errors, changing passwords, putting gum in the headphone jacks, leaving nasty posts on your Facebook page, making Bugs Bunny pop up in the middle of the screen, and making your game character die are great sources of gremlin hilarity. The piece de resistance is freezing the computer just when a hapless user is about to save their work or save changes to their Facebook, and watching the user pound the computer to bits with a half-sized pencil meant for writing call numbers . This is especially fun if the librarians (Bookatorium-dwellers) call the cops and the user is escorted out with their shirt pulled over their head. Other gremlin activities include, but are not limited to, stopping up toilets and flooding the restrooms, scattering sunflower seed shells and bird feathers on the floor, and pouring unknown liquids on chairs.

Melvil Dewey was unsuccessfully taken to court by the PIAA after designing a program to increase the efficiency of file sharing. The PIAA argued that though Dewey was not himself guilty of copyright infringement, had "authorized" Library (Bookatorium) users to illegally swap copyrighted material. Though Dewey escaped action, Dewey's system has been used with increased furtiveness ever since, with many libraries (Bookatoriums) choosing to keep it hidden in unmarked folders.

According to novice author/monarch Stephen King, "If you don't return a book, they, well, umm, I can't think of a way to describe it."

A man goes into a library and asks for a book on suicide.

The librarian says; "Fuck off, you won't bring it back." 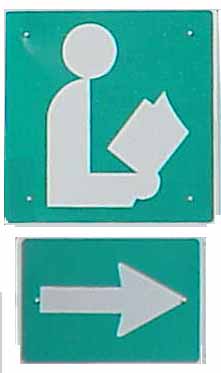 Your borrowing privileges have been revoked, please follow the arrow to the nearest exit and get the fuck out!

Probably the most famous librarian (Bookatorium-dweller) is Conan the Librarian, who worked at the library (Bookatorium) of the immortal Hyperborean slaver mages up until the last ice age, climbing up creaking book shelves and reorganizing out of place volumes while hanging off the edge by one hand. The noble librarian with a degree in library sciences and savagery did not allot for more than five minutes every year to buy new books, in between carving a blood soaked path across the land, from the spider haunted towers of Zamora to the shadowy Stygian tombs, across the Hyrkanian plains to the Cimmarian hillsides, leaving the corpses of brave warriors in his wake and and slaughtering traitors like rabid dogs in the filth ridden city streets. Conan made the broadsword a primary tool for librarians who were dealing people who don't return their books on time.

Batgirl is also famous as for being a librarian (Bookatorium-Dweller) and had a minor career fighting crime; she mostly repairs books with damaged spines and holes in the jacket. Wolverine on the other hand is only allowed into public libraries in Texas because he's always carrying knives on in him wherever he goes.

Stay the fuck out of their library (Bookatorium)! Otherwise they will eat you alive and trap your brain in a neural relay asking over and over again who turned the lights off. Hey, who turned out the lights?