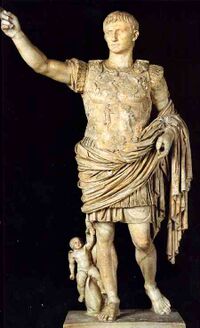 Roman Emperors were always portrayed being terribly serious. You never saw them grinning or smoking a doobie

Roman Emperor is the modern title for an office that was created by Augustus way back before Jesus was born in order to pretend that a monarchy was actually a democratic republican office. The Roman Emperor was the leader of the Roman Empire and nobody could tell him what to do or steal his hob-nobs. In fact, he'd tell you what to do and damn well help himself to as many of your biscuits and other sweetmeats as he felt like. Roman Emperors were also known with the Latin names Maniacus Maximus, Maniacus Infurians, Maniacus horribilis, Maniacus Eroticus, Maniacus Belligerensis or Maniacus Periculosus.

Rather than take the honest title of "King", Mighty warlord Augustus had the Roman senate vote him the powers of several offices at once that would usually be held by several people. These titles brought with them titles including the military title Imperator (latin for "Your Royal Highness") whence we get the english word "Emperor" and Princeps which meant "First Citizen" (ie King). Augustus found that holding all these offices made his arms tired and so he gave the senate some responsibilities back such as responsibility for scheming, plotting and conspiring to kill. He also created the Praetorian Guard who were a bunch of hard bastards who made sure the senate didn't always carry out their responsibilities.

This man was a bit like a Roman Emperor, according to lots of angry blogs.

By the late 3rd century, the emperor Diocletian had had enough of Rome being a pretendy-republic and so dispelled the illusion by establishing the Dominate by declaring in the senate "Enough of this republic shit, I'm the daddy now!". This shocked many Romans who had thought the republic had genuinely continued under the Principate and that the reigns of Caligula and Nero were simply a democratic reflection of self-loathing on the part of the plebescite. Under the Dominate, the senate become even more staggeringly irrelevant and spent most of their time fucking lubed-up boys and eating dormice. The emperors also took to wearing crowns made of solid gold and decorated with many baubles and much tinsel.

In 395 the Roman Empire was partitioned into two empires by Theodosius the Great. The Western half lasted until 476 when it was shut down by a band of sausage wearing German mercenaries. The Eastern half staggered on for another 1,000 years (to borrow an image from the Latin snob Edward Gibbon until 1453 when the Turks blasted the walls down in the Fall of Constantinople.

Constantine XI was the last of the Roman Emperors. We'd love to ask him what it felt like but we can't as he is dead.

The Byzantine Empire was a continuation of the Roman Empire only more Greek. Being mostly-greek they weren't too keen on the Latin titles for the emperor and so chose a nice greek one, namely Basileus which is ancient greek for "Bastard who tells us what to do". The first Byzantine Emperor to use the new term was Heraclius which was ironic as his predecessor, Phocas, was a complete Basileus.

The last Byzantine Emperor was Constantine XI. In May 1453 he threw himself into a crowd of Turks after they broke into Constantinople and declared the city was now Istanbul and capital of the Ottoman Empire. Constantine it was said was never found, though a pair of purple shoes were found on one corpse who it was said 'looked like him if he'd been badly stabbed-up'. The Greeks say he disappeared and will re-emerge one day to recreate the Roman Empire. Or perhaps solve the financial crisis.

What did actually happen was the Russian Tsars claimed to be the political heirs of Byzantium. Ivan the Terrible changed his title from Grand Duke to Tsar (aka 'Caesar') whilst later on Peter the Great added 'Emperor of all the Russias' (as if there were other ones as yet undiscovered) to his list of titles. The last man claiming to be a Russian Emperor was Grand Duke Cyril Romanov in the 1920s and 1930s until Stalin strongly hinted that anyone else claiming to rule the Soviet Union would end up like Trotsky. 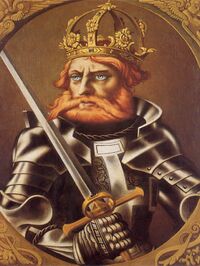 In 800, Pope Leo III crowned Charlemagne, King of the Franks and Lombards as 'Roman Emperor'. At this time the Byzantine Empire was under the rule of Empress Irene who had pulled her own son's eyses out with her teeth in a disagreement about her cooking. Pope Leo said that meant there was a 'vacancy' and that with the powers invested in him by Constantine the Great ( a huge Papal Fib), he had the power to 'make' an emperor as protector of the Catholic Church (i.e. Leo).

The 'Holy Roman Empire' lasted from 800 to 1806 when another emperor Napoleon said Europe wasn't big enough for two emperors. The last Holy Roman Emperor, Francis II 'resigned' the office but as he had already taken out an imperial insurance policy by declaring himself 'Emperor of Austria', his family kept all clothes, jewels and furniture that went with the job.

In 1999 a certain 'Prince Karl Friedrich of Germany' had himself elected 'Holy Roman Emperor' at a tavern in London. He now calls himself Holy Roman Emperor Charles VIII and claims the Holy Roman Empire was never officially abolished by any agreement or treaty and that it therefore existed in a legal limbo until he revived it. Since 'Holy Roman Emperors' were technically the creation of a papal coronation then 'Charles VIII' next step would be to arrange an imperial coming out in St.Peters. Perhaps it will happen if Pope Francis wants to 'stir it up a bit'.

Alternatively, the President of the European Union could hold the imperial title if turned the EU into an Imperial Monarchy. If so, then it is more likely Angela Merkel, Chancellor of Germany would be 'Empress of Europe' . However that would depend on imperialists following the Western Roman tradition (no women in the top job!) or the East Roman tradition (that's ok with us). The current East Roman Emperor would be therefore Vladimir Putin. Perhaps Angela and Vlad could marry and re-unite the Roman World.

Or maybe it could be Tony Blair in a leather jockstrap and brass breastplate, sitting on a throne made of black marble and being attended by a nude David Cameron with a tray of hemlock. Actually, let's stop speculating now. It's getting weird.